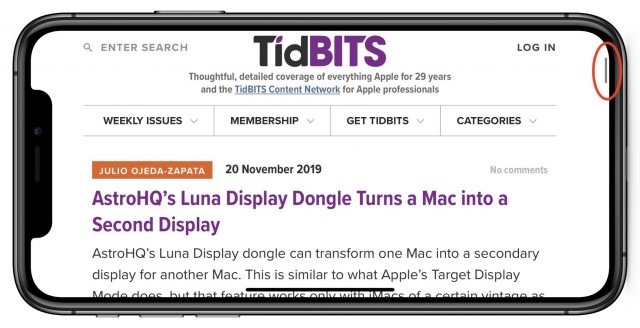 When you see the scroller—you may have to scroll a bit to make it appear—touch and hold it. It’s a bit tricky because it disappears a second or two after you stop scrolling. And even if you are fast, the scroller is a small target for a large finger. After pressing it for a second, it will enlarge, and you might feel a “click” on a recent iPhone. While keeping your finger on the scroller, move it up and down to zip quickly through the page.

Of course, nothing prevents you from using the traditional method of scrolling in iOS—by swiping up or down on the page—but the scroll bar makes it much easier to scroll long distances with minimal effort. It can take ages to swipe, swipe, swipe to the top or bottom of a long page, whereas dragging the scroller lets you jump to any position nearly instantly.

Here’s a short video showing how scrolling with the scroll bar works.

Since this new scroll bar behavior is system-wide, lots of apps can take advantage of it. Use it in Safari to scroll through long Web pages and in Mail to navigate interminable email messages. In the Twitter app, it can help you get around in your timeline, and it’s particularly useful if you need to edit a lengthy document in Pages. Notably, the Google Docs app does not support the system-wide scroll bar because Google provides its own enhanced scroller that lets you jump quickly to headings as well. But give it a try now so you have a chance of remembering it the next time you want to scroll through a long page.