Missing from last week’s Macworld Expo keynote address was Apple’s one other announcement from the show. The company updated its AirPort Extreme Base Station with a Mac mini/Apple TV form factor and 802.11n networking – a new, not-yet-standardized form of faster wireless data networking. The new device – which retains the AirPort Extreme Base Station name – includes the first Ethernet switch found in an AirPort base station, sporting three local area network (LAN) ports offering just 10/100 Mbps Ethernet. There’s also a USB port and a wide area network (WAN) Ethernet jack for a broadband connection. Only a single model is being offered so far, and it lacks an external antenna jack for
reasons I’ll explain shortly. 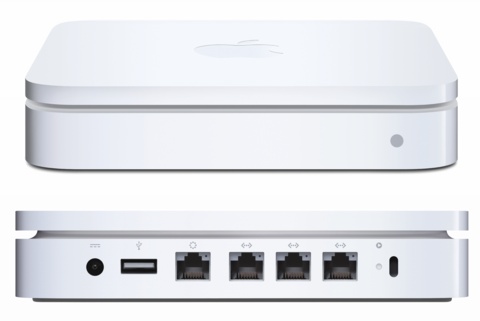 The new base station is due to ship in February 2007 for $180. It appears that the separate AirPort Extreme Card will not be updated, because Apple has already included 802.11n in certain shipping Macs, and will include 802.11n in all future desktops, laptops, phones, and the Apple TV. Using AirPort Extreme and 802.11g on an 802.11n network will slow the network down, but not to the same extent as when older 802.11b devices were used on 802.11g networks. However, using 802.11b will dramatically slow an 802.11n network.

A number of companies will offer USB, PC Card, and ExpressCard 802.11n adapters. Belkin started shipping an ExpressCard adapter for $100 just a couple of weeks ago, although Mac drivers weren’t mentioned. In any case, within a few months there should be options costing $50 to $100 for most older Macs – the USB adapters will be especially appreciated this time around due to so many Macs having no expansion slots.

Apple says in a footnote on their site that all Core 2 Duo and Xeon Macs except a single model – the iMac with 1.83 GHz Intel Core 2 Duo – support 802.11n. An “enabler” firmware updater comes with the new AirPort Extreme. It was widely reported last year by Mac users who disassembled parts of their computers that early 802.11n chips were installed, but the functionality wasn’t enabled in firmware.

No antenna jack exists in this new AirPort Extreme Base Station, as was in a previous configuration. 802.11n uses multiple-in, multiple-out (MIMO) antenna arrays that allow two or more radios to send distinct data across different radio reflective paths at the same time. This approach enables the reuse of spectrum across space. However, the internal antennas must be carefully placed and tuned in design phases, making attaching external antennas pretty much impossible. The MIMO approach produces far better coverage range by listening better (distinguishing more signal out of noise) and sending further (by focusing energy in specific directions).

New to this model is network attached storage (NAS): plug in “almost any” external USB drive, as Apple puts it, and the drive turns into a networked resource. Apple says the drive can be configured for password-protected accounts, read-only access, and other forms of access control. You can also attach a USB hub to the AirPort Extreme and connect multiple printers and hard drives. Previously, only an education-focused AirPort Extreme Base Station model supported multiple printers. (So far, there’s no word about a fire-resistant standard known as “plenum” that was also in the educational unit, and is required for many corporate and academic installations.)

The new AirPort Extreme Base Station offers both 2.4 GHz and 5 GHz Wi-Fi. This is significant because 802.11n can operate over both frequencies. While 5 GHz signals travel shorter distances, there is more spectrum available that’s less crowded. Before 802.11n, only 802.11a – a spec designed at the same time as 802.11b, back in 1999 – would work in 5 GHz, and generally only corporations using it for voice-over-IP had adopted that band.

Apple’s technical specifications say that in the United States, channels 36 to 48 and 149 to 165 are available for use in 5 GHz. This is a bit confusing because channels in 5 GHz don’t increment by one – that is, it’s not 36, 37, 38, and so on – and because different channels are limited to indoor or outdoor use. It looks like the new AirPort Extreme Base Station provides seven indoor channels (lower numbers) and five outdoor channels (upper numbers). There should be a total of 23 indoor and outdoor channels in 5 GHz in the United States, however, so I’ll be looking into that.

The utility necessary to configure one of these new AirPort Extreme Base Stations requires Mac OS X 10.4.8, although devices using technology as old as that shipped in 1999 – the original AirPort Card and 802.11b, for example – can associate for a network connection just fine using their older 802.11a, b, or g connections.

The 802.11n standard is still in progress at the IEEE engineering standards group, but a number of companies released early versions of the protocol in equipment that was widely criticized for a lack of compatibility with each other and for faulty, early firmware. However, in recent months, chipmakers and the IEEE task group responsible for the standard have coalesced around a proposal that should be released this week, and possibly approved as a working draft in March as it edges toward release.