Thanks to the Internet, it’s becoming possible not just to communicate with people around the world but to see what they’re thinking, or at least what they choose to share with the world. Flickr has long enabled people to share their photos either with small groups of friends and family or with any other Flickr user, and while there’s a wide range of pictures on Flickr, it seems that most people practice some level of selection and filtering, choosing only the best or most interesting. While I can’t pretend that I have much time to spend on Flickr, when I’m directed there for one reason or another, I’m often impressed by the photos I see. There’s something both specific and universal about them, even
when you don’t know the places or people pictured.

In contrast with Flickr is the latest hot service for mobile navel-gazers: Twitter. Twitter defines itself well as “A global community of friends and strangers answering one simple question: ‘What are you doing?'” You’ve heard of solutions looking for a problem? Twitter is thousands of answers looking for a question that no one cares about. For instance, did you need to know that as I wrote this, laurennmcc is off to the dogpark? Or that thatguynamedtom has to go to class but would rather sleep in all day? Oh, the drama of it all!

What’s ironic is that what Twitter users are doing is wasting time informing the world of just how mundane most of our lives really are. There are a few interesting uses, such as comedian Steven Wright’s one-liners, a timer service that reminds you of events via Twitter, and someone who is twittering the first lines of books. And of course, in a very small circle of Twitter-using friends, there could be the occasional bit of status information that would be actually useful.

Why would I be comparing Flickr and Twitter? Because of a pair of new services from David Troy: Flickrvision and Twittervision. Both services display a world map, scrolling around in it to display either a photo recently posted on Flickr or a message recently posted to Twitter. I watched one service, then the other, for a few minutes.

I was first mesmerized by the photos flickering by in Flickrvision, providing a pictorial glimpse into the lives of total strangers across the world. It was a bit like flipping through the participatory 24/7 photo books created by Rick Smolan and David Elliot Cohen – I didn’t know any of these people, nor did I recognize any of the places pictured, but that was as much the charm of it as anything else. I could build stories in my head around the people in those pictures, and I could imagine staring out at the landscapes shown. By providing a geographic context for these random photos, I was able both to learn more about another part of the world and to add my own take on
each photo in some small way, giving it yet another level of meaning, at least for me. Want to see Flickrvision without browsing to it directly? Download Chris Bailey’s Visionary screen saver. 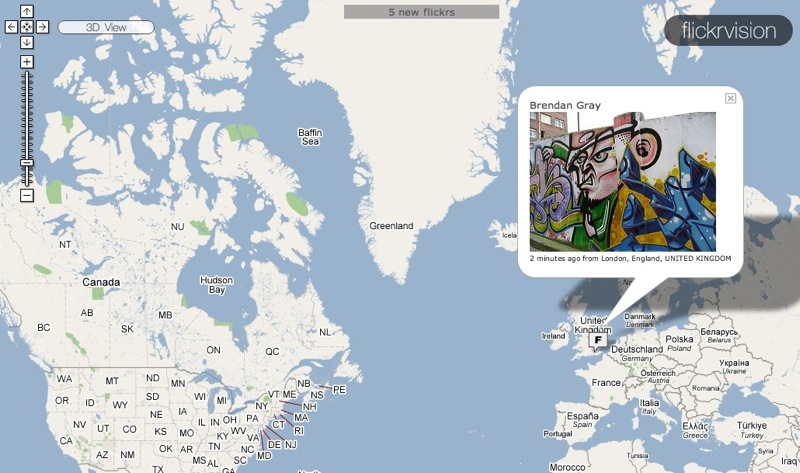 The dialog balloon messages in Twittervision, using exactly the same map interface, gave me an entirely different feeling. I watched it with horrified fascination, trying to figure out from each message why the person had chosen to share that particular thought, or just who might actually care one whit to read the message. Occasionally I could divine some utility to a message, but most seemed purely to be the result of random neurons firing. And worse, while I particularly enjoyed seeing photos from other parts of the world via Flickrvision, Twittervision made me realize that random neural firings from other countries are, not surprisingly, in other languages – making them even more nonsensical. Amazingly, I once saw a message from
someone with whom I’ve exchanged email in the past, saying that he was taking the bus home, apparently in Ann Arbor, Michigan. Alas, I don’t know him nearly well enough to care. 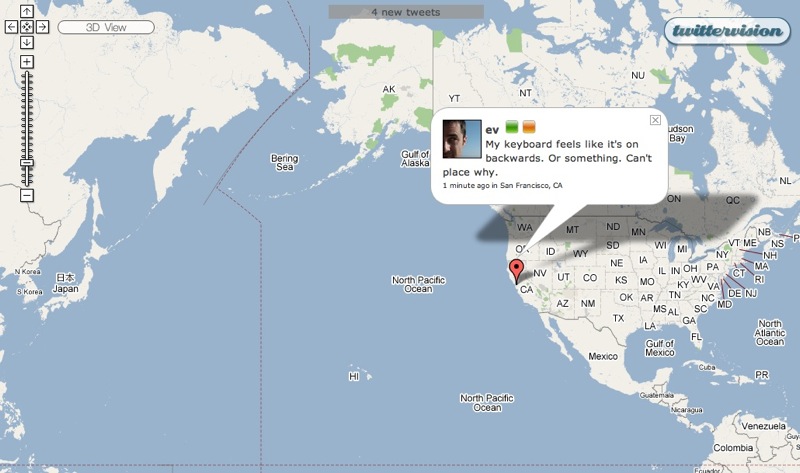 The human brain is in constant activity, and we all have innumerable thoughts throughout the day. One aspect of growing up is learning just which of those thoughts is worth sharing with the people around you, and in what fashion. Flickr, particularly given life via Flickrvision, shows how the interpretation of thoughts and experiences via still photos can prove sublime. Twitter, especially when laid bare via Twittervision, makes clear just how important it is for us to filter our internal thoughts to avoid polluting the infosphere with them.