Darn you, PopCap! Darn you to heck for all e-ternity! Sorry, that might be a little severe, but just when I was actually experiencing an increase in my workday productivity as I’ve gotten used to the capabilities and limitations of my iPhone, PopCap Games decided to release a Web version of its Bejeweled game that’s tailored for the iPhone.

This so-called game is actually a mind virus that aliens – PopCap executives and programmers – have distributed in an effort to sap the life force of human beings, softening us up for probing and later conquest and consumption. The fact that this Web-based version uses AJAX and can be played at no cost over both EDGE and Wi-Fi networks due to its low bandwidth requirements reveals the insidious nature of the plot. 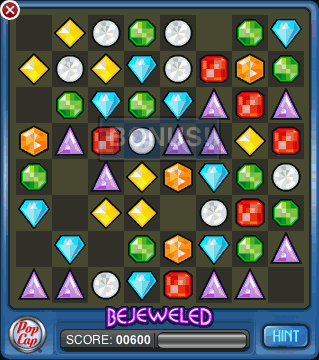 You score points in Bejeweled by lining up three or more gems either horizontally or vertically. You can line up gems by swapping the position of any two gems adjacent to the left, right, top, or bottom. The simple description belies the mind-numbing intensity with which you can play the game. My wife Lynn had to delete Bejeweled from her handheld organizer years ago because (before we had children to occupy us) she could play a continuous game for hours.

I, for one, welcome our new alien overlords. All hail Bejeweled! Now, if you’ll excuse me, I have to play just one more game.