In last week’s “special event” presentation, Apple CEO Steve Jobs whipped through the announcement of the much-anticipated new iMacs with an almost cursory spin through a change in industrial design that updates the current iMac look. The new iMac comes in 20-inch and 24-inch models (bye-bye, 17-inch iMac), is much thinner, and is built largely of glass and a single sheet of aluminum instead of the previous white polycarbonate. In a nod to the recent hullabaloo about Apple’s green credentials (see “Steve Jobs Talks Green,” 2007-05-07), Jobs even called attention to the fact that the two materials are highly recyclable. 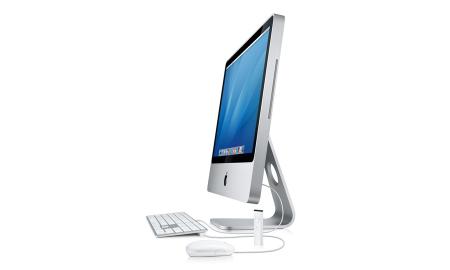 As with the previous iMac models, the new iMac includes a built-in iSight video camera and microphone, an infrared port (with an Apple Remote for talking to it), and a slot-loading SuperDrive (with dual-layer support). In a row along the back, the new iMac offers audio input and output jacks, three USB 2.0 ports, one FireWire 400 and one FireWire 800 port, gigabit Ethernet, and DVI video out (you’ll need a separate adaptor, for about $20, if you want to use it). 1 GB of RAM is standard, upgradable to 4 GB (by removing just one screw, the only one that’s visible), and 802.11n wireless networking and Bluetooth 2.0 are built-in. Base models are accompanied by a keyboard (for more about that, read on) and Mighty Mouse. In a move that may be
controversial, the glossy screen is also standard.

As far as we can tell, the Core 2 Extreme processor used in the new iMac differs primarily from the Core 2 Duo in clock speed, although it also features something called an “unlocked multiplier” that enables it to be over-clocked to run at higher clock speeds for greater performance. Although there are quad-core instances of the Core 2 Extreme, Apple appears to be using only a dual-core version. Interestingly, the fact that the Core 2 Extreme used in the iMac has an 800 MHz front-side bus points to it being the X7800, which Intel lists as running at a 2.6 GHz clock speed, suggesting that Apple has taken advantage of the unlocked multiplier to clock it up to
2.8 GHz.

Apple also released the new Apple Keyboard, an incredibly thin input device that’s reminiscent of the keyboard used in the company’s laptops (it’s only 0.33 inches/8.3 mm tall, as opposed to the 0.99 inch/25.1 mm height of the previous Apple Pro keyboard). The $49 wired model, which accompanies the new iMacs in their base configuration, uses USB (and provides a pair of USB 2.0 ports); a $79 wireless model, available with the iMacs as a build-to-order option, relies instead on Bluetooth, while dropping the USB 2.0 ports. Both keyboards offer, along with all the usual keys, dedicated keys for Mac OS X features like Exposé and Dashboard, along with media keys for play/pause, eject, brightness,
and volume.

Mac & macOS Tech News
Cookies & Privacy: We wish we were talking about chocolate-chip cookies here, but our Web site—like nearly all others—relies on a few minor digital cookies. Various laws around the world require us to tell you that fact, so consider yourself informed, if not nourished. By continuing to use this site, you agree to our use of these cookies. Cookie and Privacy Notice