Apple is shipping a revised version of its new AirPort Extreme Base Station shortly – some people may have received it already – with the only stated upgrade being a move from “Fast Ethernet” (100 Mbps) to gigabit Ethernet (1000 Mbps). (See “AirPort Base Station Upgraded to Gigabit Ethernet,” 2007-08-13.) I expect a firmware upgrade will follow this software upgrade as there are many documented bugs and inconsistencies in the 802.11n AirPort Extreme. I’ve described them and a number of workarounds in “Take Control of Your 802.11n AirPort Extreme Network.” (I’ll be updating the book if there are enough changes
beyond gigabit Ethernet to warrant it.)

A quick look at the AirPort Utility 5.2.1 that’s part of this update shows that Apple added a couple of controls near password entries for administrative access (Base Station Password) and Wi-Fi security (Wireless Password). There are now checkboxes to choose independently whether either password is stored in the Mac OS X keychain. Apple also added a Password Assistant icon to help choose a strong password. 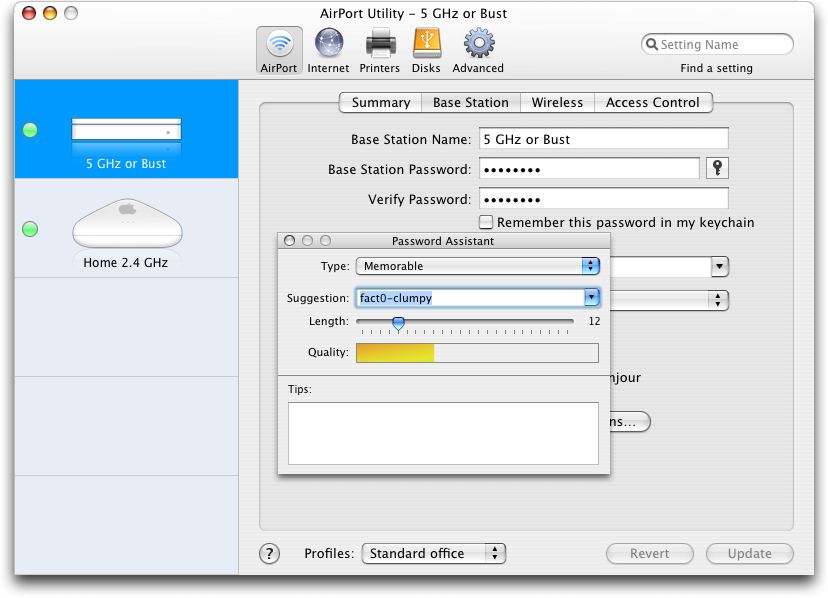 The software also expands the Preferences dialog, adding choices about when to check for updates (daily, weekly, or monthly), and to “monitor base stations for problems.” That last option relies on a daemon, the AirPort Base Station Agent, which is installed with this update and keeps track of the health of base stations that are either configured by AirPort Utility or reachable on the network. You can check a box to ignore base stations you didn’t configure, potentially useful on larger networks.

AirPort Utility is backwards compatible with all AirPort Extreme and AirPort Express models, but can be obtained only by installing it from the disc that comes with a new 802.11n AirPort Extreme base station.