Life has been hectic of late, with lots of guests, the C4 conference in Chicago, Tonya and Tristan off on vacation, and oodles of things to do. I realized I was going to have trouble finding time to ready my MacBook for a trip (basically a matter of copying my Eudora folder over so I can read email on the laptop rather than my desktop Mac), so I did it a few days before leaving. And since I’ve gotten back, I’ve been sufficiently busy – and I’ve had a few instances where I needed to use the MacBook away from the house – that I haven’t yet moved my email back to my G5. (And yes, I know that using IMAP to pick up mail could eliminate the need to move my Eudora folder around; with the amount of stored email I have and the importance email plays in my life, I’ve never been comfortable attempting a switch away from POP.)

Normally, I find working on two computers awkward, since email remains by far my primary means of communication with the outside world, but I generally prefer to write, use the Web, and test software on the G5, with its two 17-inch screens. Moving files and clipboard data back and forth is awkward at best with file sharing and remote control software, and using separate keyboards and pointing devices interrupts my flow of thought. But during the last few weeks, I’ve been relying on a tremendously clever and useful piece of freeware that solves all of these problems in a simple and elegant fashion.

Teleport’s interface is minimal, just a menu bar icon for quick sharing and deactivation, and a pane in System Preferences that enables you to set the virtual layout of your Macs’ monitors; set trusted hosts (since you don’t want just anyone controlling your Macs remotely); and a variety of options related to switching among Macs, transferring files and clipboard data, and more. 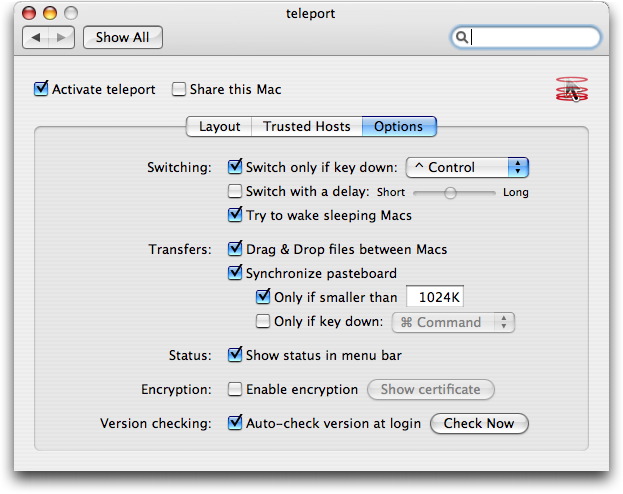 That’s right, Teleport can also transfer files (just drag the file as you move the cursor to the other machine) and an optional setting automatically transfers clipboard data along with the cursor. So, if I’m sent an attachment in email, but I want to put it on my G5, I just Control-drag it to the top of the screen and drop it on the G5’s Desktop. Similarly, if I need to move some text from Eudora on the MacBook to BBEdit on the G5, I just copy, transfer the cursor, and paste – it’s seamless.

Other interesting features include the capability to encrypt the entire data stream, the capability to wake sleeping Macs when you try to control them, keyboard modifier control of when the clipboard contents are transferred, and more.

In heavy use over the last few weeks, I’ve noticed a few problems with Teleport. Figuring out the most convenient virtual screen setup took some time, and although I initially wanted to avoid relying on a modifier key to switch screens, I ran into usage difficulties with every side I tried. Even now, when controlling the MacBook, if I click on the topmost pixel of the menu bar when trying to access a menu, something causes the current window to lose focus and the menu doesn’t drop. (Julien tells me this is a known problem related to having drag & drop of files enabled.) Once or twice, Teleport stopped responding while I was controlling the MacBook, and I had to put the MacBook to sleep to restore control to the G5; after waking the MacBook up, I was able to control it properly again. Although the contents of the clipboard do transfer from one Mac to another, I suspect that some clipboard metadata that identifies what sort of data is in the clipboard is ignored, since pasting styled text from one machine to another sometimes results in odd behavior. This may be related to the fact that I’m moving data between a PowerPC-based Mac and an Intel-based Mac; I’ll be testing a new version to confirm that soon. These problems are little more than occasional annoyances, though, and haven’t posed significant trouble.

Although Julien publishes Teleport under the Abyssoft name, he’s been working at Apple for the last three and a half years, and while that may have slowed his work on Teleport, it has by no means stopped it, and Julien is working on a Leopard-compatible version right now. In sum, Teleport works today with Panther and Tiger, it’s free, and it’s extremely useful for anyone who wants to work quickly among multiple Macs. It’s a 523K download.

Comments About Tools We Use: Teleport