Just keeping up with Apple is taking some effort these days, as the company rolls out new hardware and software products every few months. At a special event on 05-Sep-07, Apple CEO Steve Jobs announced new versions of all current iPods, a new version of iTunes with a custom ringtone maker for some purchased tracks, the new touch-screen and Wi-Fi-enabled iPod touch, and the capability for the iPod touch and iPhone to purchase music from the iTunes Store via Wi-Fi connections.

But first, let’s pass on a few numbers, just because they’re really large and therefore amusing, especially for those of us who remember Apple’s dark days. So far, Apple has distributed over 600 million copies of iTunes, and although it works fine on its own, from Apple’s perspective, it’s largely an interface to the online iTunes Store, which:

Jobs also reported, with glee, that 32 percent of all 2006 music releases in the United States were not released on CD, but appeared only online. Most of those came from independents, undoubtedly, but still, it’s a telling trend.

Finally, Jobs reported that Apple has now sold 110 million iPods, and needless to say, the holiday buying season accounts for a spike in the sales graph each year. To juice that up this year, Apple updated the iPod shuffle with new colors, redesigned the iPod nano and the now-renamed iPod classic, and introduced the iPod touch.

iPod touch — When Apple introduced the iPhone, it wasn’t long before people started asking for the same features but without the cellular phone component (in particular, see Adam’s contribution to “Staff Roundtable: Who’s Buying an iPhone?,” 2007-07-02). Apple has delivered just that with the iPod touch, a music and video player in a case very similar to the iPhone. The screen size is the same 3.5 inches (88.5 mm), and the unit includes 802.11b/g Wi-Fi, omitting the cell-based EDGE data standard used by the iPhone. At 8 mm (.31 inches), it’s thinner than the iPhone, and Jobs said that it can play audio for 22
hours and video for 5 hours on a full charge. 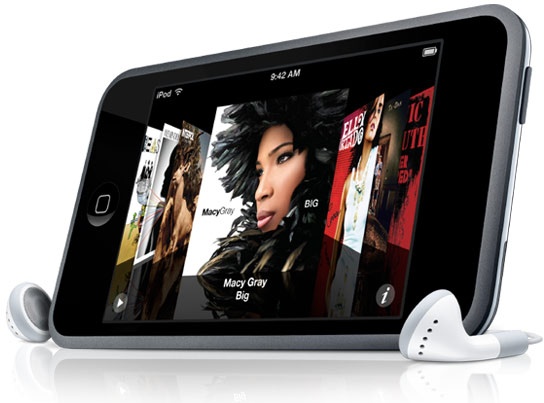 The iPod touch features the same multi-touch interface as the iPhone (flicking pages to advance them, zooming photos by pinching and separating your fingers), and includes the same virtual keyboard. It also features an accelerometer that senses when the device is being held horizontally or vertically to switch the presentation accordingly.

The Wi-Fi connectivity can be used for Web access using Safari and watching videos from YouTube. Oddly, there’s no Mail program, although webmail services should work in Safari. However, the real appeal of Wi-Fi on the iPod touch is to work with the new iTunes Wi-Fi Music Store (see below).

Buy Music over Wi-Fi from iPod touch, iPhone — Apple carefully titled its new direct-purchase option as the iTunes Wi-Fi Music Store; it will appear later this month as an option on the iPod touch and the iPhone. The Wi-Fi part emphasizes that you won’t be able to use the slow EDGE connection found on the iPhone; that would overwhelm AT&T’s network quickly. And you won’t be able to download videos, just music; hotspot operators have an interest in not enabling multi-gigabyte downloads over their 1.5 Mbps to 8 Mbps network backhaul. (Contributing Editor Glenn Fleishman has spoken to several hotspot operators in the past who had misgivings about even music
downloads from portable devices.)

Both the iPhone and Microsoft Zune were criticized for not offering a method to download music via the onboard Wi-Fi. This addition certainly leapfrogs the iPod touch beyond the Zune – if the Zune and its related store had ever been a viable choice for buying and listening to music. (The day before Apple’s announcement of the iPod touch, Microsoft dropped the 30 GB Zune’s price to $199, a $50 reduction.)

The music store application lets you browse through songs by popularity, recency, or featured new releases; listen to short previews; search for titles; and purchase by clicking a Buy Now button. The entire iTunes Store music library is available.

The Wi-Fi store also neatly integrates with a new partnership with Starbucks. The founder and chairman of Starbucks, Howard Schultz, appeared on stage to show off a special button that appears when a Mac or Windows computer running iTunes, an iPhone, or an iPod touch is within range of a specially configured T-Mobile HotSpot network at a Starbucks store.

The button displays an option to purchase the song that’s currently playing in the store. You can also see the last 10 songs played in the store. The Wi-Fi network connection also lets you browse and buy other songs at the iTunes Wi-Fi Music Store, but you don’t gain access to the Internet without joining the main network and paying or using an existing T-Mobile HotSpot subscription. This feature will also work in iTunes on Macs and under Windows and on the iPhone.

(Logging on to T-Mobile’s paid network in Starbucks stores remains just as much of a pain as before, however: You have to bring up a Web page and enter payment information or an account if you have one. There’s no automated way to join the paid network even with an account.)

Apple said that the iTunes Wi-Fi Music Store button will simply appear after synchronizing an iPod touch or iPhone once the feature is enabled later this month. Likewise, the Starbucks option will appear on the iPod touch, iPhone, and in iTunes after the service is turned on.

While Starbucks appears to be simply enabling Internet-based purchases of music, more could come. Over the last few years, many Wi-Fi service providers have talked about putting media servers in hot spots, whether coffeeshops, planes, or trains. These media servers could contain the most popular music and video – a couple terabytes’ worth, easily – and allow a purchase on the local network to be transferred at local network speeds, which exceed 20 Mbps with 802.11g. This move by Starbucks and Apple could easily be seen as the first step on that route.

Ringtones — Although sources disagree somewhat, it appears that ringtones – snippets of music played when a mobile phone rings – are huge business, accounting for as much as $5 billion annually worldwide. The U.S. share of that market is relatively small, though, somewhere in the $600 million range. However, in 2005, only 13 percent of U.S. cell phone subscribers reported downloading ringtones, according to M:Metrics.

Apple is hoping to get a piece of that action and increase it with the new ringtone-making capabilities built into iTunes (as of this writing, the feature is not yet active). For $0.99 on top of the price of a song purchased from the iTunes Store (for a total of $1.98 normally), you can buy the right to create a custom ringtone up to 30 seconds long, with fade-ins and fade-outs, to use with an iPhone. A little bell icon in iTunes indicates which songs are available for ringtone purchase; 500,000 songs are participating, which points out a bit of hyperbole in Apple’s “A million songs. A million ringtones.” graphic.

Clearly the popularity of ringtones indicates that civilization is nearing its end, and we’re sure that Apple will make oodles of money from selling ringtones. But people, you’re paying twice for the same song! (And some of us feel that the only good cell phone is a vibrating cell phone.) But yes, if you’re desperate to have a clip from a song that will embarrass you when it rings in public (well, we’re embarrassed for you, even if you aren’t), purchasing a ringtone from the iTunes Store will be easy and inexpensive. If you’re more the sort of person who plans to create and switch among lots of ringtones and you have an iPhone, Ambrosia Software’s $15 iToner makes more financial
sense (see “iToner Makes iPhone Ringtones Easy,” 2007-08-31).

iPod shuffle — The least-changed iPod is the iPod shuffle, which retains its 1 GB of storage and $79 price, but now comes in new aluminum colors: silver, purple, teal, and green, along with a (PRODUCT) RED version. A portion of the proceeds from each sale of the (PRODUCT) RED version will go to the Global Fund to fight AIDS in Africa (Apple did this previously with the iPod nano; see “New iPod nano Sees (RED),” 2006-10-16).

iPod nano — Whereas the iPod shuffle saw only color changes, the iPod nano has been redesigned to be shorter, wider, and thinner – only 6.5 mm thick – and it comes in silver, teal, green, and charcoal, along with (PRODUCT) RED. The new dimensions are specifically aimed at providing room for a larger 320 by 240 pixel display that Apple claims is 65 percent brighter than before and can play video. The iPod nano also sports a tiny version of Cover Flow that lets you select tracks by album art. Two versions of the iPod nano are available, a 4 GB model for $149 and an 8 GB model for $199. 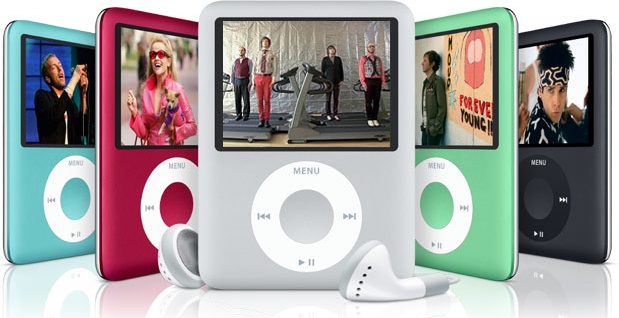 iPod classic — The media player formerly known simply as “iPod” is now the iPod classic, and it too has been improved with the rest of the iPod line. Now available with either a silver or black aluminum face, the iPod classic stores either 80 GB or 160 GB of data – up to 40,000 songs or up to 200 hours of video, according to Apple. (That’s the size of Jeff Carlson’s MacBook Pro hard drive, and yet still not large enough for Mark Anbinder’s media collection!) As with the new iPod nano, the iPod classic now uses the improved iPod interface, including Cover Flow as an option, for navigating content using the click wheel. The iPod classic costs $249 for the 80 GB
model and $349 for the 160 GB model. 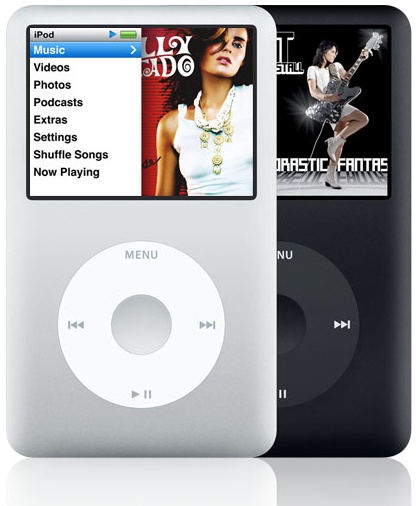 iPhone Price Drop — The last surprise of the day was Apple’s announcement that it’s eliminating the low-end 4 GB iPhone model to focus on the 8 GB model, and lowering the price of that one to $399 – a $200 price reduction. (The remaining stock of 4 GB iPhones will sell for $299.) Recent iPhone purchasers who bought from an Apple Store can take advantage of the company’s price protection policy, which offers a refund of the difference between the price paid and the current selling price. The policy covers purchases of any Apple-branded product within 14 calendar days of the date of purchase. An original purchase receipt is required, and
you must request your refund within 14 calendar days of the price reduction. (If you bought your iPhone from an AT&T Wireless store, you’re not covered by Apple’s retail price protection.)

Despite the slate of new iPods, the iPhone price cut garnered the most attention following the event, particularly from people who laid out $600 for the iPhone since it was introduced on 29-Jun-07. In response, Steve Jobs published an open letter at the Apple Web site announcing a $100 store credit for those who purchased an iPhone prior to last week’s iPod event (see “Apple to Offer $100 iPhone Rebate for Early Purchasers,” 2007-09-07).

Entertainment iPhone, iPad, & iOS Networking
Cookies & Privacy: We wish we were talking about chocolate-chip cookies here, but our Web site—like nearly all others—relies on a few minor digital cookies. Various laws around the world require us to tell you that fact, so consider yourself informed, if not nourished. By continuing to use this site, you agree to our use of these cookies. Cookie and Privacy Notice