So what is Apple’s market share? It’s a tricky number to figure out in the best of times, and I’ve often argued that it’s an essentially meaningless statistic anyway, since companies like Dell and HP sell heavily into business settings where the users have no say in what they’ll use, whereas Macs are purchased primarily by individuals spending their own money. They’re completely different markets.

But the situation becomes more interesting if you have an apples-to-apples comparison. In chatting with friends at Cornell University, I learned that Cornell keeps statistics on the operating systems used by the 6,842 students connecting to the Ethernet-based ResNet, Cornell’s Residence Hall Network Service. (This is not all Cornell students, just those living in the dorms.)

The ResNet breakdown is quite a bit different from the single-digit percentages often associated with the Mac market share and shows Apple in a much more favorable light. Overall, Macs are used by 21 percent of Cornell dorm dwellers, compared with 78 percent using PCs.

Most of the Macintosh share is of course Mac OS X, though 4 percent claim to be running Windows on an Intel-based Mac (which means they’re also almost certainly running Mac OS X), and a mere 0.12 percent are running Mac OS 9 or older (that’s 8 hardy souls, if you were wondering).

On the Windows side, Windows XP has the lion’s share, at 49 percent, with Windows Vista at 22 percent. Windows XP Media Center Edition comes in at 7 percent (students rely on their computers for music and video entertainment, so this percentage isn’t surprising), and other versions (Windows NT/2000, Windows Me, and Windows 95/98) are in use by only 23 students – just enough for two soccer teams and a referee.

In terms of serious geekery, Unix/Linux is in use by only 0.53 percent of students (about 36), and 5 students are apparently still relying on “Other” operating systems. I like to think there’s one person each running ProDOS, OS/2, TRS-DOS, AmigaOS, and the BeOS, though I can’t imagine that all of those support Ethernet.

Needless to say, you can’t extrapolate to the wider world from these numbers – just because 21 percent of Cornell students living in the residence halls use Macs, it doesn’t mean that Apple has 21 percent of the overall market. Nor does it mean that Apple has 21 percent of the college student market, since students attending an Ivy League university like Cornell very well may have different demographics than students going to other colleges and universities. If you have access to similar statistics at other institutions, send them to me and I’ll investigate further.

Even if you can’t extrapolate, you can look at historical trends, since Cornell publishes a page with the basic Mac versus Windows statistics for ResNet subscribers. Although Mark Anbinder tells me that the numbers before 1999 may suffer from under-reporting (since students weren’t required to list their operating system when they signed up), several facts jump out at me from these numbers.

First, in the first few years, Mac OS percentages were much higher (41 percent, falling to 12 percent in the first four years). That could have been due to a much higher percentage of Macs, but I suspect Mac users of that time were more likely than Windows users to sign up for ResNet due to easier networking configurations. Or perhaps Mac users were simply more likely than Windows users to report their platform when signing up. Either way, the numbers probably aren’t all that valid.

Second, from 1999 on, when students were required to list their platform when signing up, the percentage of Mac OS-using students on ResNet dropped slightly from 6 percent to 5 percent, and then started rising again, to 10 percent in 2005. That’s not impressive, but the next two years’ percentages are: 14 percent in 2006, and this year’s 21 percent. That’s a huge jump, as you can see in this graph. 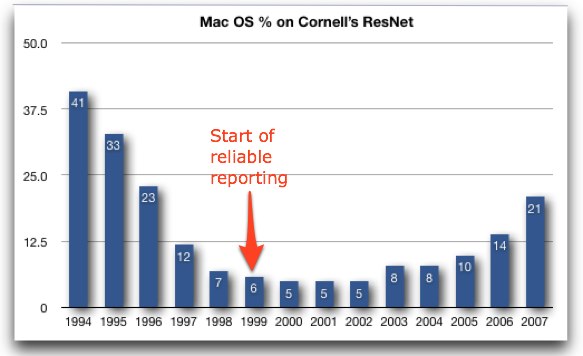 So one way or another, Apple’s market share among Cornell students connecting to ResNet has increased from 5 percent in 2002 to 21 percent in 2007. Clearly, Apple is back in higher education, at least in this little corner of the world.

Mac & macOS Tech News
Cookies & Privacy: We wish we were talking about chocolate-chip cookies here, but our Web site—like nearly all others—relies on a few minor digital cookies. Various laws around the world require us to tell you that fact, so consider yourself informed, if not nourished. By continuing to use this site, you agree to our use of these cookies. Cookie and Privacy Notice