Amazon.com has launched a public beta of Amazon MP3, a digital music store that provides DRM-free downloads of over 2 million songs from 180,000 artists and 20,000 labels. In comparison, Apple says the iTunes Store now contains over 6 million songs.

All songs in Amazon MP3 are encoded at 256 Kbps, which is comparable to iTunes Plus songs, although in theory, the iTunes Plus AAC format could provide better quality than the MP3 format used by Amazon. Because Amazon is using MP3 and avoiding DRM entirely, songs purchased from Amazon MP3 are playable on any device, including the iPhone and iPods, along with Macs, PCs, and music players from other manufacturers.

Individual tracks can be purchased directly from a Web page, but to buy an album, you must first download and install the Amazon MP3 Downloader, available for both Mac OS X and Windows (a 615K download for the Mac version). Reportedly, a Linux version is in the works.

In my testing, the Amazon MP3 Downloader worked acceptably, but it was a distinctly clumsier experience than purchasing from iTunes. Clicking a Buy button on the Amazon Web site downloaded a document to my Desktop. I believe the Amazon MP3 Downloader was supposed to open it and download the actual song, but I had to double-click the file manually, likely because Amazon wasn’t expecting that I’d be using a browser other than Safari (I generally rely on OmniWeb). Once opened in Amazon MP3 Downloader, the song was downloaded to an Amazon MP3 folder in the Music folder and then sent over to iTunes, which, at least for my setup, means that it was duplicated, since I keep my iTunes Music folder on a server for shared usage and copy music to
that folder when adding it to my iTunes Library. 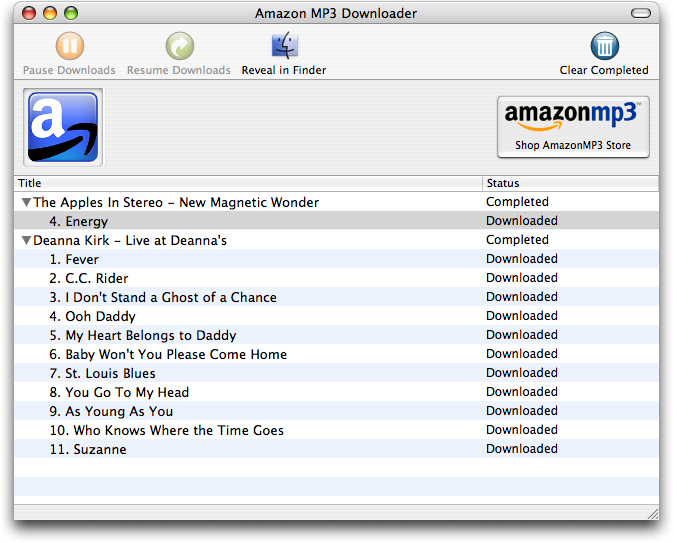 Songs I purchased were encoded at between 208 Kbps and 256 Kbps using variable bit-rate (VBR) encoding, and the free sample song was encoded at 280 Kbps VBR. Sound quality was certainly fine to my ears, though I’m no audio connoisseur. The metadata was complete and album artwork was either included or picked up automatically by iTunes.

Not Too Shabby — Amazon MP3 is the first online music store besides the iTunes Store that hasn’t left me cold. Its advantages are very real:

I don’t think Amazon MP3 will be putting the iTunes Store out of business by any stretch of the imagination. It’s competitive, thanks to the lack of DRM, low prices, and ease of shopping, but it’s clumsier than using iTunes, and everyone who has an iPod will be using iTunes anyway to sync music, so it’s not as though Amazon can ever get as close to the iPod as Apple can. The good news is that by releasing an online music store that doesn’t suck, Amazon has given Apple some real competition, and where there’s competition, there’s innovation.

Of course, the next question is if Amazon will translate these advantages in Amazon MP3 (no DRM, Mac-compatible, integrated with iTunes) to their Amazon Unbox video download service. Were that to happen, the iTunes Store would have significantly more competition.