Remember radio? You probably used to listen to it in the car before you had an iPod, or maybe there was a particular show on the local radio station on Sunday mornings that you enjoyed while eating a leisurely breakfast. But while the VCR and then digital video recorders like the TiVo enabled us to timeshift television, recording it and letting us play it back on our schedule, radio has long been rigid about its schedules. There have been cobbled-together ways of recording radio to cassette tape over the years, sometimes even in a semi-automated fashion, but for the most part, radio has been a real-time experience. And that in turn has meant that it fell by the wayside in favor of on-demand music, podcasts, and audiobooks.

Thanks to Radioshift, an utterly cool new product from the audio-focused Mac developer Rogue Amoeba, radio can once again become a part of your life. Radioshift combines the RadioTime database of Internet radio streams and shows with a slickly interfaced application for finding, recording, and managing Internet radio shows. And before you ask, no, most radio shows are not available in podcast format, although a podcast version of a radio show is probably easier to acquire in iTunes than via Radioshift.

Find Radio — Locating radio stations used to be a matter of rolling through the spectrum with your tuning dial, finessing the perfect spot for each station. With Radioshift, you can instead search for stations and shows, browse among popular shows ranging from NPR’s All Things Considered to Rush Limbaugh, jump directly to stations and shows you’ve set as your favorites, or explore by genre or geographical location (great for catching up on Australian radio). 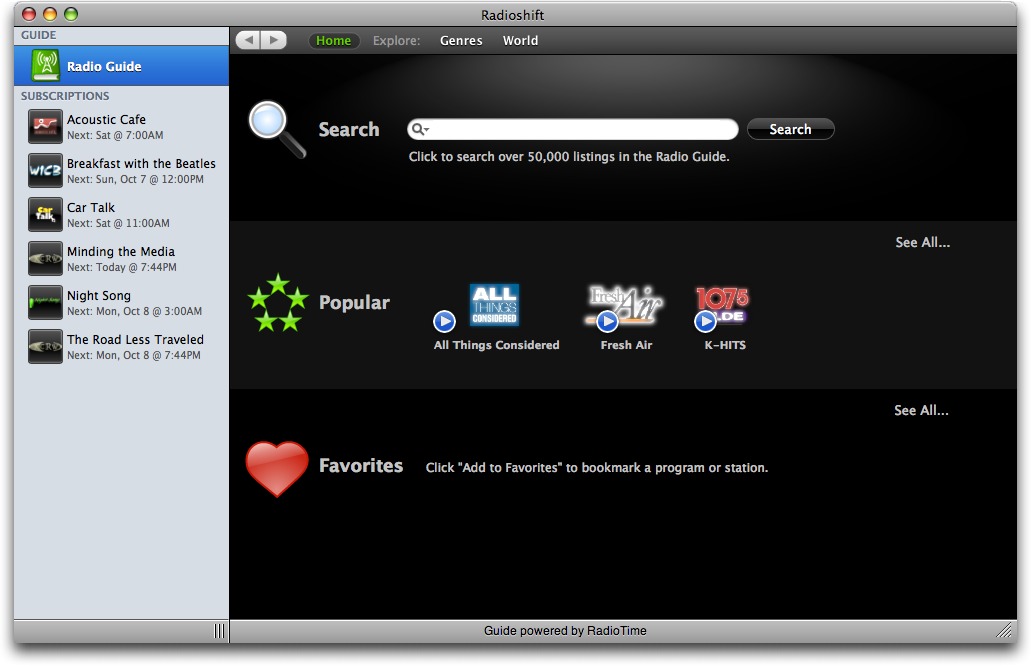 Search for a station, such as Ithaca’s WVBR, and you find not only the station, but also a listing of any regularly scheduled shows that RadioTime knows about. Or just search for a term to find stations and shows that include that term in their descriptions. Sometimes you’ll find a show whose Listen Now and Subscribe buttons are disabled, which indicates that Radioshift can’t access the show for some reason – perhaps because it uses an unsupported Web-based player, or perhaps because it’s an AM/FM-only station – and isn’t yet properly filtering it out of the results. A Missing or Incorrect Info link in the upper right of the Radioshift view for any station or show lets you report problems to an automated tool at Rogue Amoeba’s Web site,
which will pass that information on to RadioTime.

Since Radioshift accesses the RadioTime database live, Rogue Amoeba can (and has, I can attest) improve search results without even requiring users to update the program.

Recording Radio — Once you’ve found a station or show you want to record, Radioshift makes the process as painless as possible. For shows, just click the Subscribe button and Radioshift will automatically record the next episode of the show to your preferred format (128 Kbps AAC by default). Unfortunately, you can’t tweak the recording format by show, which means you can’t record sports talk radio at 32 Kbps mono (to save space) and your favorite piano jazz show at 192 Kbps stereo (for higher audio quality). Subscriptions appear in an iTunes-like pane at the left of the window; numeric badges indicate when a particular subscription contains new shows.

Although the RadioTime database boasts over 50,000 shows, it doesn’t yet know about many shows on smaller radio stations or those that don’t promote their Internet streams. For instance, the Ithaca College station WICB has been running Breakfast with the Beatles on Sundays from noon to 2 PM (we’re talking college student breakfast time here) for over 20 years, and although RadioTime knows about WICB’s Internet stream, it doesn’t know about Breakfast with the Beatles. Radioshift makes it easy to add a custom show, called a “station subscription.” Find the station, click Subscribe, and set the On, From, To, Title, Artist, and Genre fields as desired to cause Radioshift to record the specified stream at the appropriate times. Click the
Finished button to save your changes and it’s set. 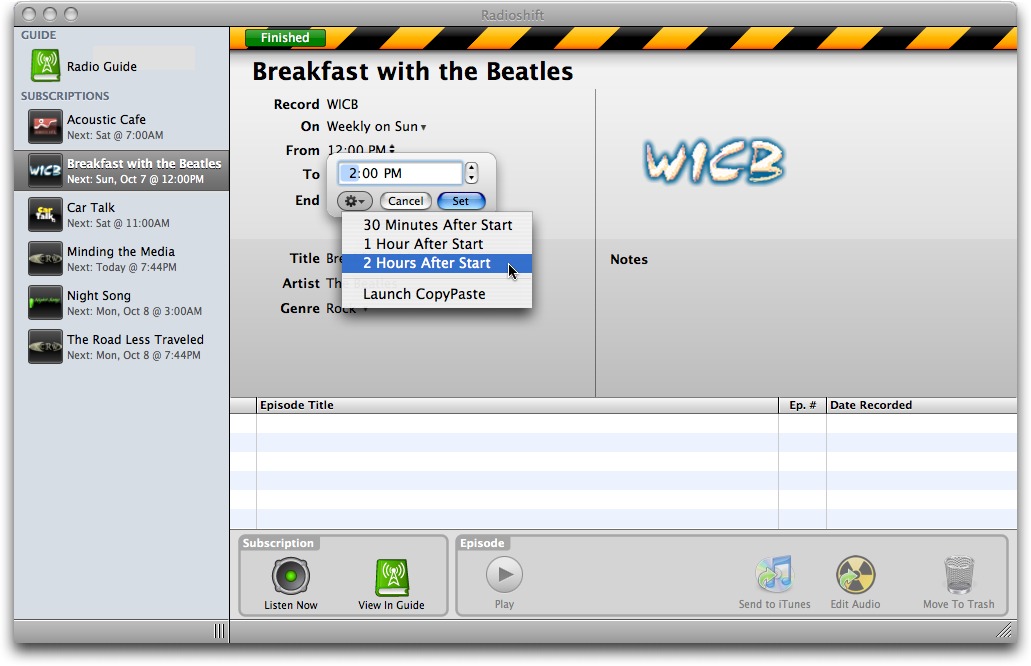 Radioshift can record MP3, QuickTime, Real Audio, and Windows Media streams (the latter two may require installing additional software if you don’t already have RealPlayer and Flip4Mac installed, something that Radioshift simplifies). As a result, Radioshift should be able to record nearly anything you throw at it. It even supports Griffin Technology’s RadioShark USB radio, which enables recording of local AM/FM radio to a computer. So if there’s a local station that doesn’t have an Internet stream, you can still record its shows with the combination of a RadioShark and Radioshift. Show episodes are stored in a Radioshift folder in your Music folder.

Needless to say, your Mac must be turned on, awake, and connected to the Internet to record these Internet streams. Radioshift itself doesn’t need to be running because a background application called Radioshift Helper does all the heavy lifting. The Automatically Wake/Power-On checkbox in the Preferences window will cause Radioshift to wake or start up your Mac in time to record scheduled shows. Radioshift won’t wake or power up a closed laptop; even if possible, it’s a bad idea.

Managing Radio — Once recorded, show episodes appear in the subscription view, from which you can play them, send them to iTunes, edit their audio files, or delete them. Radioshift 1.0’s playback capabilities are minimal – you can only start and stop. There’s no navigation within an episode, no way to skip over ads or chatter, nor much of anything else. For additional playback controls, send the episode to iTunes, where it can also be synced to an iPod, iPhone, or Apple TV.

If you have the time and interest, you can also edit episodes using an external editor like Rogue Amoeba’s $32 Fission, which would enable you to trim unnecessary bits, split a show into multiple files, and so on. Honestly, that’s more effort than I care to devote to my radio listening, though I’m sure there are people out there who will happily spend the time to create a perfectly edited archive of a particular show.

Dealing with recorded episodes is an entirely manual process. There’s no way, for instance, to record an episode and have it automatically sent to iTunes and then deleted (the latter of which might be important if you prefer to copy music into your iTunes Music folder when adding to the iTunes Library). Be a bit careful, since a several-hour radio show could easily chew up 100 MB to 200 MB of disk space, and although hard disks are much larger than they used to be, Radioshift could easily fill up a large percentage of one if you didn’t pay attention to a large collection of subscriptions for a few weeks. I could easily imagine the next major release of Radioshift adding an Automator-like workflow interface that would let you specify
what Radioshift should do with each episode after it’s recorded.

Aside from the refinements I’ve suggested above, which I suspect are relatively easily implemented, my only real criticism of Radioshift is that it opens up a whole new world of high quality, free content (sounds terrible, doesn’t it?). That actually scares me a little, since I’m already inundated with more interesting articles, music, podcasts, audiobooks, YouTube videos, TV shows, and movies than I can possibly absorb during my waking hours. Perhaps young people are better at it, but for those of us who grew up in an age of information scarcity, learning how to pick and choose among an infinity of content is a non-trivial task that’s aided only by the finiteness of free time. But just as I’ve settled on just a few podcasts that fit
into the time I spend driving and doing yard work with the iPod, I imagine that Radioshift will enable me to select just those few radio shows that I most enjoy. Overall, Radioshift is smooth, attractive, and compelling, and it makes easy something that was previously either difficult or impossible.

Radioshift 1.0.1 costs $32, requires Mac OS X 10.4 or later, is a universal binary, and is available as a fully functional trial version (13.4 MB download) that degrades audio quality after 20 minutes of playback or recording.

Entertainment Productivity
Cookies & Privacy: We wish we were talking about chocolate-chip cookies here, but our Web site—like nearly all others—relies on a few minor digital cookies. Various laws around the world require us to tell you that fact, so consider yourself informed, if not nourished. By continuing to use this site, you agree to our use of these cookies. Cookie and Privacy Notice