Ambrosia Software’s new WireTap Studio is an impressive collection of tools for recording and editing audio on your Mac. WireTap Studio manages the entire process of selecting your audio source(s), post-processing the recording, and exporting the finished product in the format of your choosing. What’s most interesting is that, like edits made to photographs in iPhoto 7, all edits made to an audio file are completely non-destructive, and are essentially applied on top of the file. You can even selectively remove specific changes, such as removing a particular filter or a specific cut in the audio.

Basic Recording — Recording is managed by a small controller window in which you select one or two audio sources (Skype, iChat, iTunes, built-in microphone, etc.), a format in which to record (MP3, AAC, AIFF, Apple Lossless, etc.), and any effects you want to apply (reverb, hiss removal, hum removal, etc.) After choosing settings, you click Record, and that’s all there is to it. 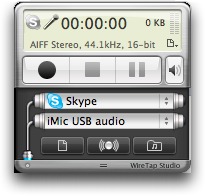 You can optionally play back a live preview of your recording through your speakers or headphones as you record, a useful feature for checking that your settings are giving you what you want. Unfortunately, it performed poorly when doing a live voice capture (such as when creating a podcast), since the lag between saying something and hearing it played back was around 4 seconds on my 1.25 GHz PowerBook G4, which is, admittedly, near the bottom of the recommended hardware. It is virtually impossible to speak coherently while hearing your words played back on a time delay.

You can set WireTap Studio to split the resulting files based on size (to keep audio files no larger than 200 MB each, for instance) or on silence (to create a new file after 2 seconds of silence, for example). This latter feature came in quite handy when I recorded a mix tape my sister made in 1981 so that each song on the tape was split into its own track, enabling me to work with each song individually.

Being able to record multiple sources comes in handy while recording something like a Skype call. The first input is Skype itself, capturing everything the remote caller says. The other input is the microphone that’s recording everything you say. Together, they capture both sides of the conversation.

You can apply filters to the audio as it is being recorded or afterwards when editing the recordings. Previously, I always did my filtering after the recording was finished, largely due to the limitations of my computer. But since WireTap Studio applies filters in a non-destructive manner, there’s no performance hit (unless I am doing a live preview), which provides welcome flexibility.

Editing the Sound — WireTap Studio’s audio editor is simply gorgeous. You can perform all of the basic transformations you can make in most other audio editing tools but, unlike other tools, these transformations may be edited or even removed afterwards. Say you recorded a Skype conversation for a podcast, and you want to edit out a side comment your guest made to trim the interview. Select the audio in question and hit the Delete key. WireTap Studio automatically removes the offending clip and provides a smooth fade out and back in again to make the transition cleaner than a straight cut might be. You can adjust both the type of fade and its duration. Better still, you can undo the entire thing and restore
the cut audio even long after performing other edits. 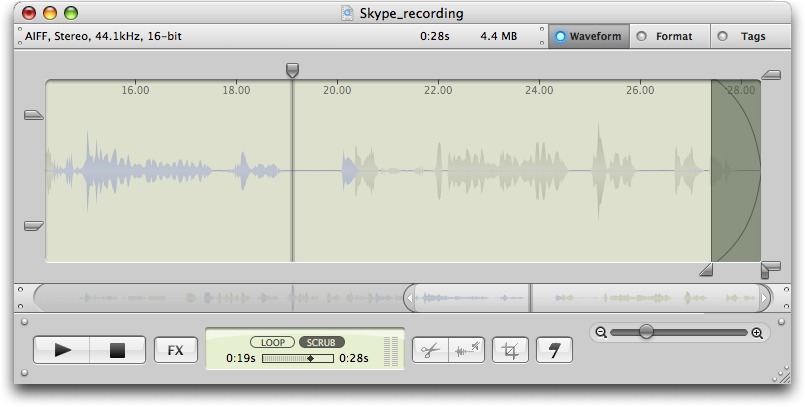 This non-destructive editing and processing applies throughout. Even if you change the format of the audio – perhaps reducing it from CD-quality to a low quality MP3 – you can always return it to its original format, restoring all the original fidelity to the recording. The same thing applies to audio effects. If you punch up the audio, perhaps by adding a little reverb to provide some depth and increasing the bass slightly, you can always change your mind later, tweaking your settings or removing the effects entirely.

What’s most impressive about this is that you can apply all of these format changes and effects while listening to a live preview, so you can hear, in real time, what your changes sound like. If you have done even a minimal amount of audio editing, you’ll appreciate what a time saver this is and, honestly, how much fun it is.

WireTap Studio’s editing flexibility extends to the level of individual sources. When you record from two sources, they’re displayed in two colors in the editing window: gray for one, blue for the other. You can apply filters to each source individually and adjust their relative volumes. You cannot, however, edit the specific waveforms of one source without affecting the other, nor can you join two different sound files into one multi-channel file. 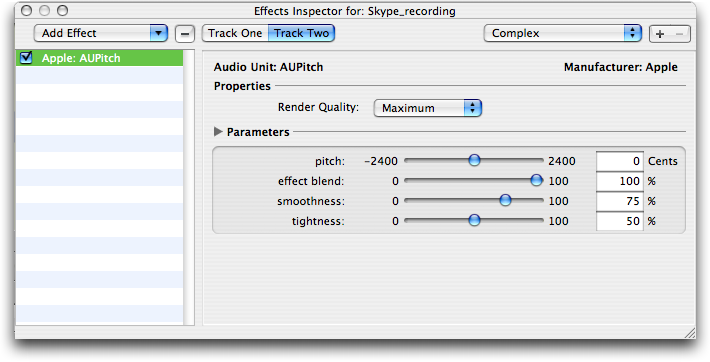 The main downside to this non-destructive editing is that WireTap Studio keeps ultra-high quality audio files lying around at all times, essentially requiring you to have a large hard drive. If you are absolutely certain you won’t need to revert to the version before your current edits, you can remove that original version to save hard disk space.

Timed Recording — WireTap Studio has the capability to do timed recordings. You can tell it to begin recording immediately, for a set number of minutes, or you can set it to start recording at a given time for a certain length of time. I was able to set up a recording of a radio stream via Windows Media Player for a specific date and it recorded without a hitch. But I had to know the URL and the date and time, so it lacks the simplicity of Rogue Amoeba’s RadioShift (for a full review, see “Radioshift TiVos Internet Radio,” 2007-10-02).

Podcasting — Thanks to WireTap Studio’s capability to capture audio easily from any source, podcasters will find the program particularly useful. For example, you could record an interview via Skype, and then later record and edit your own voiceovers.

Once you had captured all of your source audio, you could bring everything into a multi-track editor, such as GarageBand, to sequence it together and create your master mix-down. This file could in turn be brought back into WireTap Studio for any final edits and to be exported in the correct file format. WireTap Studio’s capability to preview different format settings in real time would help you to find the perfect balance between file size and audio quality.

From WireTap Studio you could export it to iTunes or export to a file for uploading to your server. In short, WireTap Studio is an excellent and useful addition to any podcaster’s toolbox.

Comparing to Audio Hijack Pro and Fission — Those familiar with audio recording and editing programs may wonder how WireTap Studio compares with Rogue Amoeba’s popular Audio Hijack Pro (for recording; see “Rogue Amoeba Hijacks Phone Calls More Easily,” 2006-07-31) and Fission (for editing; see “Fission Manipulates Audio Tracks of All Stripes,” 2006-09-25). Neither of those programs, good as they are, has seen a significant update in some time, and I find WireTap Studio’s interface to be cleaner and more easily
navigated, particularly when it comes to recording audio from different sources. Plus, WireTap Studio’s capability to add and remove filters before and after recording is unique. On the flip side, Audio Hijack Pro beats WireTap Studio handily when it comes to providing an interface to metadata such as lyrics, track number, and so on. Overall though, WireTap Studio has caught up with and, in some cases, surpassed Rogue Amoeba’s tools for the moment, giving Rogue Amoeba incentive to come up with some innovative improvements of their own.

Closing — WireTap Studio is a beautifully designed, highly functional tool that is a joy to work with and that provides a wealth of powerful recording and editing tools. However, this power comes at a price – you need a sufficiently fast Mac and a lot of free disk space.

WireTap Studio costs $69, with upgrades from WireTap Pro priced at $30. You can use the program for 30 days for free without limitation; after 30 days, a voiceover is mixed into all recordings, although the editor and library continue to function normally. WireTap Studio requires Mac OS X 10.4 or later and QuickTime 7.0 or later, running on a 1 GHz PowerPC G4 or faster Mac, or any Intel-based Mac.

[Andy Affleck is the author of “Take Control of Podcasting on the Mac” and has been tinkering with audio tools since the days of Farallon’s MacRecorder on his Mac Plus.]