[With the word on the Web being that Mac OS X 10.5 Leopard doesn’t support the Classic environment, we asked Sharon Zardetto, author of three Take Control titles about fonts, including the soon-to-be-released “Take Control of Fonts in Leopard,” to give TidBITS readers the low-down on how to make sure old font suitcases from Classic are successfully packed for their trip to the future with Leopard. -Tonya]

If you’re planning to upgrade to Leopard but are still hanging on to the Classic environment, it’s probably time to let go: reports indicate that Leopard won’t let you run it, even on a PowerPC-based Mac (Intel-based Macs can’t run Classic even under Tiger). But before you go bravely out into the Leopard world, take stock of your fonts – because if you have old ones hanging around, this could be your last chance to straighten out your font suitcase files for free, using Apple’s ancient Font/DA Mover utility, which you can still run under Classic.

Two types of font files that predate Mac OS X are still totally useable, but possibly prone to problems: Mac TrueType suitcases and PostScript Type 1 suitcase files (the “screen font” companion files to the “printer font” files). Both of these suitcase-type files have icons that are stamped FFIL and are identified as “Font Suitcase” as their Kind in the Finder.

These elderly font files might have inherent internal problems (for the most part, those can be identified, although not fixed, by Font Book’s automatic validation process), but the problems I’m referring to here are user-introduced ones.

Pack Your Suitcases for Leopard — To use old fonts in Leopard without trouble, make sure that your suitcase files are:

In addition, although pre-Mac OS X systems allowed “loose,” non-suitcased font files (a single TrueType face, for instance), Mac OS X can’t use that kind of file, and it must be put into a suitcase.

If you remember the ease with which you could manipulate fonts and suitcases under Mac OS 9, you’ll be disappointed that you can’t do that under Classic – because Classic isn’t really an operating system, it just pretends to be under pre-Leopard systems. But what you can do is download Font/DA Mover 4.1, last updated for System 6 (no, that’s not a typo!) and run that under Classic to clean up your old suitcase files. 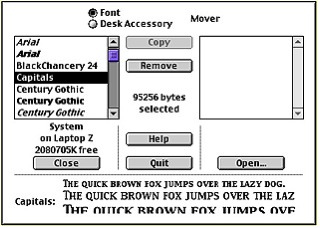 Sometimes you just have to go back before you can go forward.

If You Don’t Have Classic Already — If you don’t have the option of working under Classic, you needn’t scrap your old suitcase files. Two utilities that run under Tiger – Smasher ($50) and FontDoctor ($70) – let you manipulate suitcases, and they will, presumably, be updated for Leopard. Both are quite pricey if all you need to do is shuffle suitcase contents. FontDoctor, which is available as a standalone program or with the font manager Suitcase Fusion ($100), also fixes corrupt font
files.

Leopard Arrives Mac & macOS Media Creation Problem Solving
Cookies & Privacy: We wish we were talking about chocolate-chip cookies here, but our Web site—like nearly all others—relies on a few minor digital cookies. Various laws around the world require us to tell you that fact, so consider yourself informed, if not nourished. By continuing to use this site, you agree to our use of these cookies. Cookie and Privacy Notice