Bare Bones Software has released BBEdit 8.7.1, adding a few new features and squashing a bunch of minor bugs. The new features include the capability to insert time stamps from the Edit > Insert menu, support for dropping items from disk browsers into applications like Terminal that expect file URLs, and the capability in language modules to turn off spell checking for code runs. For a full list of new features, changes to existing features, and bug fixes, see the extremely detailed BBEdit Current Release Notes page (and contrast it with Apple’s terse release notes, which could be performed by a mime). BBEdit 8.7.1 is a free update for users of BBEdit 8.5 or later; it’s a 15.2 MB download. Mac OS X 10.4 or later – including Mac OS X 10.5 Leopard – is required, and the program is a universal binary.

And while I have your attention about BBEdit, I want to tell you about a little-known feature in the program that saved me from data loss last week. I encountered some server problems that resulted in nearly every static file in my server’s Web directory being deleted. Ugly, but I have Retrospect set to duplicate the main disk in our Xserve to the second disk every night. I run other backups too, but it was easy to move the active database over to the second disk, set the second disk as the startup disk, and reboot. The server was offline for an hour or two, since I was working very carefully and making copies of important data in case of further problems, but the overall approach of switching to a duplicate was simple.

The only problem was that this happened in the afternoon, and I had been editing files on the server all day, work that I didn’t want to recreate. Since I was editing directly on the server, I didn’t have local copies of those files. Luckily, in the Text Files pane of BBEdit’s Preference window, there’s an option to make a backup of each file before saving. Since I had long ago set that option, I was able to go into my BBEdit Backups folder and recover the most recent version of each of the files I had changed during the day. If you regularly edit remote files live, I strongly encourage you to turn on BBEdit’s backups. 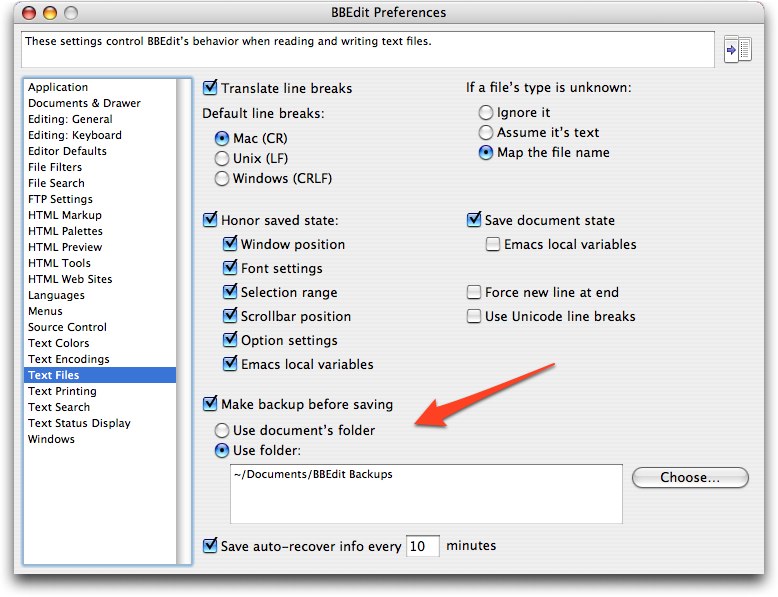 The only downside? Since I forget about that BBEdit Backups folder regularly, it currently contains over 17,000 files dating back to 2004. Oops… time to delete anything before 2007.

Media Creation Problem Solving Productivity
Cookies & Privacy: We wish we were talking about chocolate-chip cookies here, but our Web site—like nearly all others—relies on a few minor digital cookies. Various laws around the world require us to tell you that fact, so consider yourself informed, if not nourished. By continuing to use this site, you agree to our use of these cookies. Cookie and Privacy Notice