Amazon has released its much-anticipated Kindle, a $399 electronic book reader that features a persistent high-speed network connection using Sprint’s 3G EVDO cellular network. Amazon is offering over 88,000 books for sale for use with the Kindle, with New York Times best-selling titles and new releases generally priced at $9.99. Short stories and classics cost $2 or less; a seemingly small number of books cost more than $10 in a quick browse through the library.

Basic Comparisons — The Kindle breaks away from previous electronic book readers by providing a large number of titles and a continuous network connection. The most closely comparable device prior to the Kindle is the Sony Reader, a second generation of which shipped recently with a street price of around $300 (see “Sony’s PRS Ebook Reader and Connect Bookstore,” 2006-12-18 for a review of the first generation). The iPhone isn’t a direct competitor, but it’s worth
comparing because of its network connection and highly legible screen. 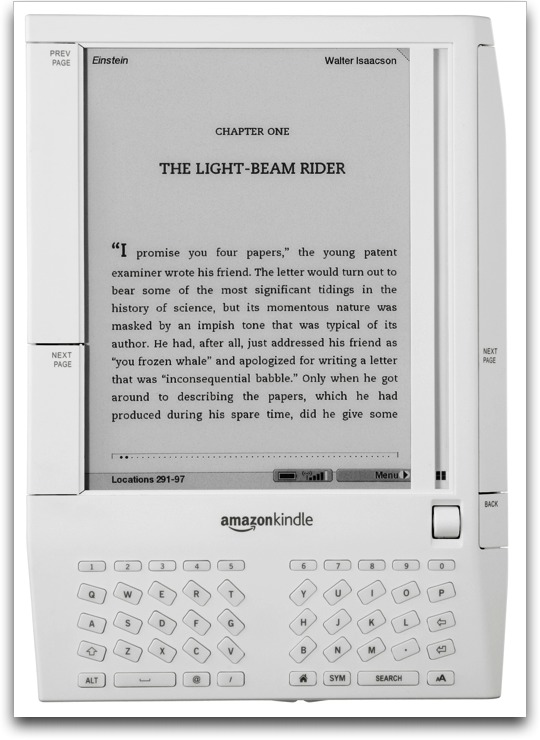 The displays on the Kindle and Sony Reader are both grayscale (4 shades of gray for the Kindle versus 8 shades for the Sony Reader), so books with complex illustrations or which require color won’t work well or at all. Both devices have 6-inch diagonally measured screens that display 800-by-600 pixels at about 160 pixels per inch (ppi). The iPhone is a full-color device that uses anti-aliasing to improve text legibility on a 480-by-320-pixel, 3.5-inch diagonally measured screen at about 160 ppi.

The Kindle features a Secure Digital (SD) expansion slot and a USB port. The Sony Reader has both, along with support for Sony’s proprietary Memory Stick, while the iPhone has just USB connectivity. Amazon doesn’t list Kindle’s memory capacity, but elsewhere the company said that the Linux operating system that drives it and internal files occupy about 60 MB of 256 MB of internal storage. The Sony Reader has 192 MB; an iPhone a whopping 8 GB. The iPhone trumps the others here because it’s designed to play audio and movies.

Whereas both the Sony Reader and the iPhone require a computer (Windows for the Sony Reader, Mac or Windows for the iPhone), the Kindle doesn’t require a computer at all. However, if you do want to load personal content or audio files, the Kindle mounts as a USB drive, and you can manually back up content or copy over new items in formats Kindle supports. (The Kindle is therefore the first electronic book reader that works with Unix, Linux, and variants.)

Zooming in on Differences — After those basics, though, the differences between the three multiply. The offerings for what to read with the Kindle make it clear how serious Amazon is about making Kindle a success.

It’s All about the Network — Much of what makes Amazon’s overall approach with Kindle work is its persistent network connection. The Kindle is the first device I’m aware of that ships with high-speed network access and without a subscription fee or a recurring fee of any kind. The cost of network use and data delivery is built into the price of each item you purchase or subscribe to. It’s the first portable ebook reader that might have a shot because of how it marries legibility, a network, and a large library.

Blogs and periodicals are delivered continuously as new items or issues are published over what Amazon calls “Whispernet,” a continuous push network for content you subscribe to. When you purchase a book, it’s immediately downloaded.

The Sprint EVDO network that Amazon relies on is available extensively in most medium-sized and larger cities, but is scarce outside of major population centers. That might lead to Kindle being more frustrating to use when on the road or in smaller towns where the Kindle uses a more widespread, but modem-speed technology called RTT.

However, extensive use of Kindle – in the millions of units – could conceivably lead Sprint to change its deployment pattern for where to put new EVDO base stations, as Sprint will receive a piece of all transactions in lieu of subscription revenue. As Amazon head Jeff Bezos said at the device’s announcement, “We pay for all of that behind the scenes so you can just read.”

Obvious Limitations — Before I sound overly enthusiastic about the Kindle, let me note a few problems.

With Amazon’s marketing power and customer reach behind this device, with a full-time network connection, and with so many titles available at such low cost at launch, it’s possible Kindle will light the fire that Amazon hopes, and finally get a mass audience of ebook readers.

One wonders, though, why Amazon produced such a toadstool of a product when the thoughtfulness for what lies within is so obvious. In pictures, it’s the only real misstep. The iPhone is among the most beautiful and functional devices ever created, while the Kindle is just plain homely for something that similarly aims to change the world.