Leopard includes more information than meets the eye about nearby Wi-Fi networks. Mac OS X 10.5 updates the AirPort menu in the system menu bar after you select a network, which is a neat feature and provides more accurate results. It also shows a lock icon next to networks protected by some form of encryption. But you can extract even more information by holding down the Option key while dropping the menu.

In Mac OS X 10.4 Tiger, holding down the Option key would sort networks by signal strength. That feature no longer works – networks are always sorted alphabetically (except for the network you’re currently connected to, which appears at the top). Instead, Leopard reveals connection information about whatever network you’re connected to, showing four details: the MAC (Media Access Control) address of the base station’s AirPort interface; the channel used; the receive signal strength indication (RSSI), a measure of how much energy is hitting your antenna from the base station; and the current transmission rate. 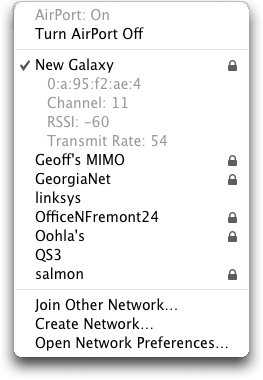 The MAC address is useful because it can tell you which base station you’re attached to if you’re using a network that uses multiple identically named base stations to provide seamless roaming across a large home or office. The channel information helps if you’re trying to figure out an interference problem with another network.

RSSI can be useful if you’re trying to tune the location of a base station and computer in relation to each other. Finally, the transmission rate lets you know if you’re getting optimum performance. Wi-Fi has drop-down speeds that are used when the highest possible rate shared between the base station and an adapter can’t be achieved; the two devices keep dropping down to slower and slower rates until an accommodation can be made. With 802.11b, g, or n, if the base station is in its default mode, that could be as slow as 1 Mbps – which is fine if you really need a connection, but not so great if you need the speed.

Astute TidBITS reader Gary Smith wrote in after I originally posted this item to note that you can also obtain information about other available networks through a tooltip that appears when you hover over a network for a moment (this assumes you Option-clicked the AirPort menu to begin with). The tooltip tells you the security method and RSSI, both of which could be useful when choosing a network to access.