[Editor’s note: Intrepid roving correspondent Jeff Porten braved the aisles at this year’s Consumer Electronics Show (CES), which was held last week in Las Vegas, Nevada. We published his reports on our Web page as he filed them, when he was conscious enough to write.]

Hello from CES, the largest consumer electronics trade show in the world, dedicated to testing the upper limits of human endurance and forcing its attendees to exceed them.

No, really. I just spent the first day of CES at The Venetian/Sands Expo and Convention Center in Las Vegas, where I succeeded in covering just about half of the show floor. There’s the other half of this floor, three other levels of exhibits, the Tower Suites for select companies, and an additional exhibition next door at the Wynn that runs until 10 PM.

After I finish all that tomorrow, I head to the Las Vegas Convention Center. The Venetian holds just the satellite show; most of the exhibits and events are at the LVCC. All told, CES has 1.8 million square feet of exhibit space, and around 250,000 people are expected to walk on it this week. The entire show requires seven different folding maps.

To put it another way, given my habit of attacking a trade show floor in grid style (up one aisle and down the next), and since most exhibitors are all too happy to hand me paper brochures made of thinly sliced wood, I’m expecting to hike 10 miles a day carrying upwards of 40 pounds of conference swag. (If anyone is interested in my Getting Things Done approach to trade shows, see my sidebar article.)

I have a stack of such swag which I have yet to go through and write about, so here’s a quick note about what I’m looking to cover for TidBITS. There are a few companies here with products that are more or less unique in their area, and interesting products will catch my eye. But the majority of exhibits have devices that differ only in slight ways from the competition, so my focus is on the products whose competitive differences really connect with the target audience.

I have some items here which illustrate this idea. In front, a media kit from Solio (manufacturers of solar power accessories); by putting this on a flash drive, it’s easy to carry and will in the future be useful to me in a way a DVD won’t. The round red pen is a giveaway from Genius; unlike most other pens given away at the show, it won’t get lost in the bottom of my bag. Finally, the official World Series of Poker lighter I bought yesterday; not for the logo, but for the form factor: it’s flat and will fit in just about any pocket I care to throw it into. 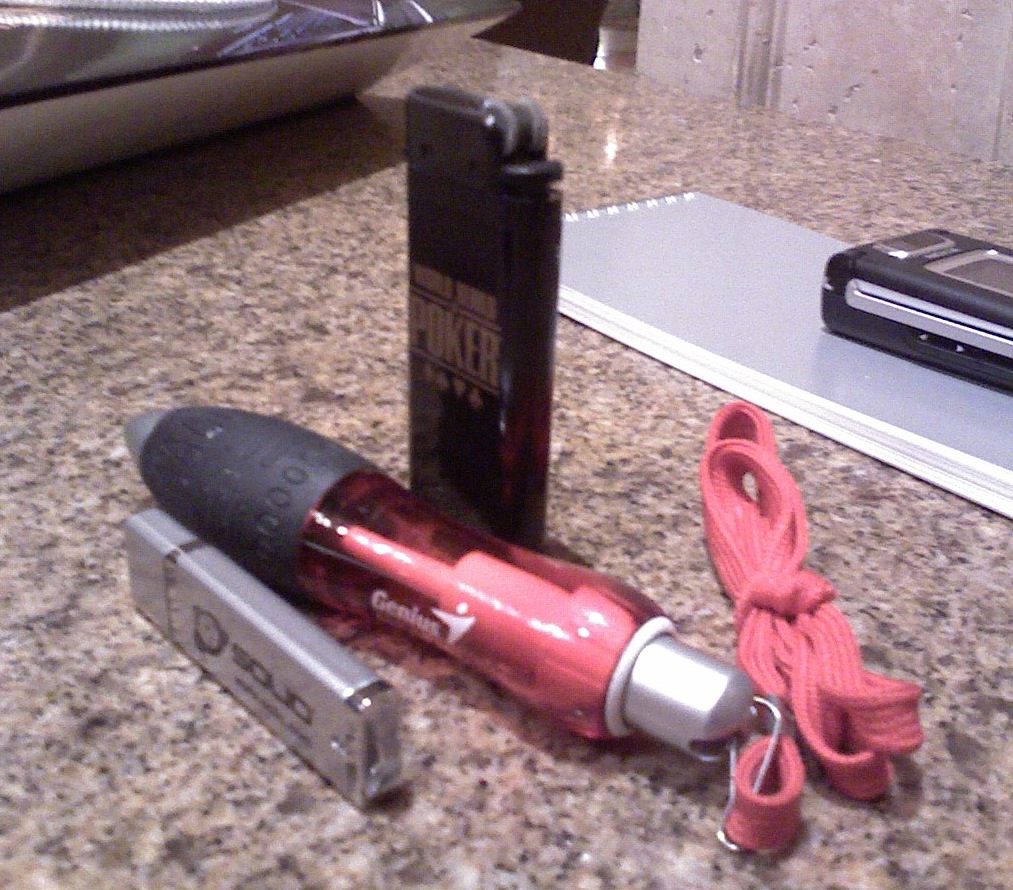 I’ll generally be too polite to mention the companies whose competitive features are negatives, but there are many people here who are making the same mistake by giving out information on mini-CDs the size of a business card. These are guaranteed to break the slot-loading drive in my MacBook immediately, and if that’s the only way they’re circulating information, it counts as points off on their friendliness to the Mac community; unless someone came here with a Mac Pro desktop, they’re not reading those disks.

Onward! Tune in soon for some actual product coverage.

CES 2008 Tech News
Cookies & Privacy: We wish we were talking about chocolate-chip cookies here, but our Web site—like nearly all others—relies on a few minor digital cookies. Various laws around the world require us to tell you that fact, so consider yourself informed, if not nourished. By continuing to use this site, you agree to our use of these cookies. Cookie and Privacy Notice