Nolobe has shipped Interarchy 9, a major update to one of the longest-developed Macintosh Internet applications. The new release adds a new secure file-transfer mode using SSH encryption that requires a server with Perl 4 or later to use. Nolobe promises substantially improved performance with the new mode for mirroring, in which files are automatically duplicated whenever they’re changed, typically to remote directories, such as the folder that holds a Web site.

A number of cosmetic changes were made as well, with the new main window display resembling a Leopard Finder window, including organizing information in a sidebar by categories, one of which is Bonjour-accessible local volumes. Long-time users may need to read the release notes to figure out where features they use have migrated to; in particular, it appears that the network testing features of the previous version have been removed. I particularly like the addition of the Copy Public URL command in the Edit menu, which lets you create a mapping between an FTP path and the equivalent URL to reach that path from a Web site, and then copy the public URL for any file in the FTP hierarchy for
pasting into email or documents. 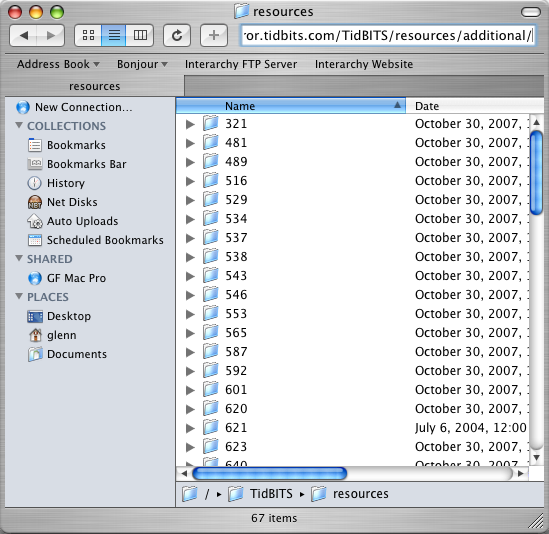 Version 9 ties into Mac OS X’s structure for mapping file extensions to applications, rather than maintaining its own mapping. This can cause some consternation. For instance, if you had previously set Interarchy to edit .html files in BBEdit, but left the .html mapping in Mac OS X to open such files in OmniWeb, you can’t duplicate that approach with Interarchy 9. An Edit With command has been added to the contextual menu, too, so you can choose among valid applications to edit a given file. This release incorporates Sparkle for updates, which slipstreams improvements in an elegant manner while the program is running (see “Sparkle Improves Application Update Experience,” 2007-08-20).