They say Las Vegas has a strong psychological effect on the males of our species, causing us to say and do things here that we’d otherwise know to avoid due to good sense or good taste.

That said, I’m probably the first man in the history of Vegas who has ever walked up to a Playboy Playmate and said, “Hi, I’m looking for whatever you can tell me about Tasers.”

Really, that’s the whole story. I have no excuse. Yes, I had noted that she and the three other women sitting at her table stood out from the crowd, but I somehow didn’t notice that they were there to sign autographs instead of hand out product information.

As for the actual products at the show, I’ll have to admit to being underwhelmed. CES is where I like to see for the first time the new technologies that I think will be ubiquitous in five years. Not so much of that at this show. If you wanted to compare 100 brands of truly massive televisions, or 350 brands of eardrum-blowing speakers, CES was definitely the place to be. But I’ve been coming here on and off for 20 years, and I remember seeing my first DVD and picking up the first issue of Wired. It’s entirely possible I missed something with a show this size, but little jumped out at me as being truly groundbreaking.

One possible exception was the bizarre iRobot ConnectR, coming later this year from the people who normally automate your vacuuming with the Roomba. The ConnectR is another short round robot, but it’s for communicating with your family: when you’re away from home, you log into the ConnectR over the Internet, and use the swivel-mounted webcam and two-way audio to talk to your kids (or your extremely patient spouse, presumably). If the boy goes mobile, you just drive it around to follow him. [Editor’s note: The mind boggles, but we’ll save our comments from the perspective of being actual parents for another article. -Adam] 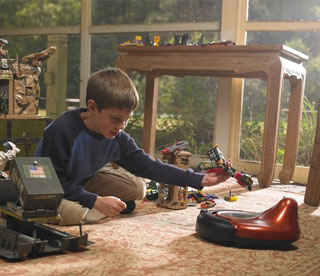 I’d write the ConnectR up anyway, just on the basis of it just being a cool piece of gear, but it strikes me as potentially breakout – if the mid-21st century finds us all using telematic devices to create a physical virtual presence, in addition to the ways we use the Internet today to cut down on virtual distance, then this will have been among the first of its kind. It’s also quite possible that it’s just too far out in left field to take hold; I can think of several rather geeky friends who travel away from their families often, and I still can’t picture one of them using this.

There was also plenty of information at CES about “intelligent transportation systems,” with a nice overview provided by the U.S. Department of Transportation’s department of the same name. ITS seems to cover, broadly, pretty much any information technology you might want to put in a car, but there are several technologies that might change the way we travel. Most interesting to me is Vehicle Infrastructure Integration, which essentially makes every car a node in a peer-to-peer network. In the early stages, this will be used for realtime traffic data and the like, but it could be an incremental on-ramp, as it were, to the self-driving cars of the future, which can fit more cars on the existing
asphalt with less congestion, and let you safely talk on the phone because the car computer is handling the driving. An alternative path being explored to the same destination is the “smart highway”; but which do you think makes more sense, putting a few billion dollars into every road, or incrementally upgrading the smarts of each automobile?

(Speaking of which… only a government would inflict its employees with a URL with the word “dot” in the domain. Imagine yourself at parties: “hi, I’m Jeff at dot dot gov.”)

I did see a few other things of note.

Vonage was handing out their $39.99 V-Phone for laptops; essentially, it’s just a 250 MB USB flash drive with a 2.5mm headphone/microphone jack. It came with the Windows software to make calls, but they neglected to include the Mac version (despite ample room on the drive), so I can’t comment on its sound quality just yet. You can try it out yourself by downloading the Mac software, along with a 30-day trial account. You don’t need the USB dongle – the Mac audio in/out will work fine – although I can tell you from experience that it’s nice to have a dedicated hardware port to use with Vonage and similar software.

If you have a bunch of home electronics that aren’t yet wireless, and you’re tired of stringing 100-foot cables from room to room, you might want to check out MoCA (the Multimedia over Coax Alliance), an industry consortium that’s creating standards aimed at letting you use your home’s existing internal coaxial cable for home networking.

Wacom impressed me with the $999 Cintiq 12WX external touchscreen monitor. Hook it up as an external monitor to your Mac, and you end up with a touch-sensitive tablet displaying the video; the promotional materials show it in use with Photoshop and a Wacom pen. The 12.1-inch Cintiq 12WX requires an external control box, so I wouldn’t think of it as providing an ersatz tablet computing experience, unless you’re crazy enough like some people to carry around lots of hardware (see “Build Your Own 23-inch MacBook,” 2007-02-05).

I didn’t stick around to play with one, but I was impressed by the brief demos I saw of the Moxi home digital media recorder system; in addition to the Tivo-style capabilities, the hardware and software provides a wide range of interactivity with your home network.

I also missed a demo of the new Myvu personal media viewer headgear. Like the i-Vue video eyewear I mentioned in “CES 2008 Day 1: Keyboards, Power, Eyewear, and More” (2008-01-09), I’m intrigued by wearable monitor technology, but without trying it, I can’t tell you if the Myvu video eyewear lets you see what’s happening around you better.

Finally, the award for best practical joke at CES goes to Dan Frakes of Macworld. I ran into him in front of the Zoombak booth, where they were demoing the $199.99 “LoJack for dogs” (actually called “Advanced GPS Dog Locator“), a pager-sized device that you can attach to a dog, suitcase, or some other similarly sized item that might wander off without you. If it goes missing, you track said item on their Web site.

But this wasn’t immediately clear to me, and the way Dan described it, I thought that Zoombak’s stuffed animal giveaways were the product, and that there was a GPS locator chip inside so you could track your children. (Which, frankly, strikes me as a pretty cool idea, until such time as parents are comfortable with subdermally “chipping” their children.) Trust me when I say this led to a highly confused conversation between me and two PR guys.

I’m still not sure whether Dan deliberately tried to put one over on me, or if I’m just so fried this week that I jumped to conclusions from his perfectly good explanation. Considering my conversation about Tasers with Miss June 2004, I probably shouldn’t blame him.

CES 2008 Productivity Tech News
Cookies & Privacy: We wish we were talking about chocolate-chip cookies here, but our Web site—like nearly all others—relies on a few minor digital cookies. Various laws around the world require us to tell you that fact, so consider yourself informed, if not nourished. By continuing to use this site, you agree to our use of these cookies. Cookie and Privacy Notice