Apple made no mention of any other changes, making it likely that these updates are the equivalent of a Mac’s speed bump upgrade where the only difference between the old and new models is the clock speed of the CPU.

It’s good to see Apple refreshing the iPhone and iPod touch lineups with the addition of these more-capacious models, but the additional memory doesn’t come for free, as CPU speed bumps usually do. Doing so after dropping the iPhone price in September 2007 could have resulted in customer unrest among those who had just purchased an iPhone or iPod touch during the holiday season (see “Apple Introduces iPod touch, Wi-Fi iTunes Store, and New iPods,” 2007-09-10).

Ironically, just a day before the announcement, a reader asked us when we expected to see an iPod touch with more memory, and we all answered that our bets were on June 2008, basing that on a likely release date for the second-generation iPhone, which will almost certainly feature 3G cellular data networking and, one hopes, a few other neat additions that could work their way into the iPod touch too. However, Ted Landau, while hedging his bets, called it on the nose, saying, “They could release a 16GB iPhone tomorrow.” The proof is in the screenshot. 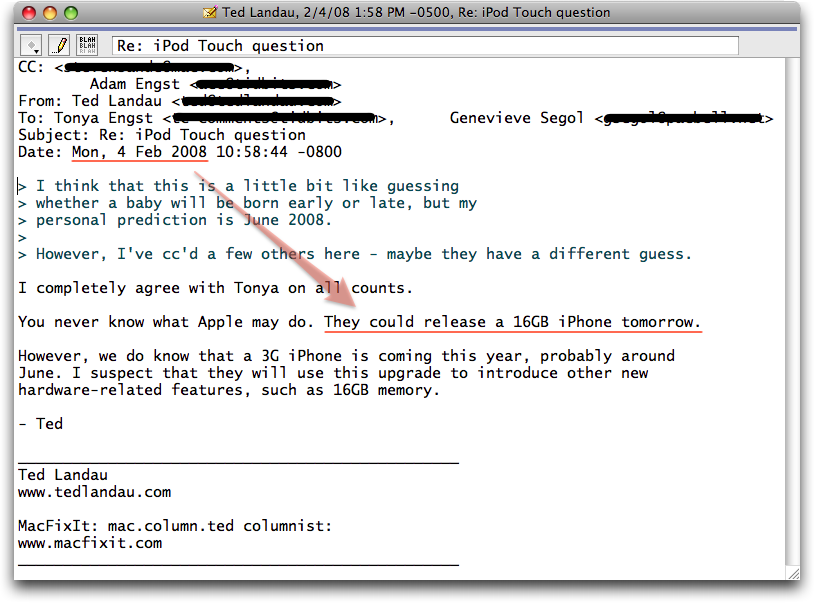