I don’t mean to be cruel with my headline, but Apple’s release of Mac OS X 10.5.2 marks the real beginning of Leopard for me, although testing will be required to bear this out. While I’m using Leopard full-time at home on an old PowerBook G4, I haven’t been ecstatic about it due to rough edges.

I beta tested Leopard, and while much was fixed at the last minute to work properly for the 10.5.0 release, using 10.5.0 and 10.5.1 was at times feeling like an extension of that beta program. Most egregiously, I had to re-install Leopard due to a known problem that resulted in an inescapable Setup Assistant at startup (see “For Want of a File, an Operating System Was Lost,” 2008-02-01). With 10.5.2, I may be ready to upgrade my primary work computer.

The 10.5.2 release is available through Software Update as a universal incremental release, updating 10.5.1 to 10.5.2, and weighs in at 180 MB on my PowerPC-based PowerBook, but Apple notes size will vary from machine to machine. No incremental updater was available from Apple’s site as I write this. The universal Combo updater, which combines 10.5.1 and 10.5.2, is 343 MB for the desktop version, and 382 MB for Leopard Server. There’s also a 49 MB Leopard Graphics Update 1.0 to install, but
only after 10.5.2 is installed and the computer restarted. The graphics update has a generic note that it improves stability and compatibility.

With the release of 10.5.2, Apple has fixed a number of things that I, other reviewers, and legions of actual users have complained about. Plus, 10.5.2 makes it possible to stop using utilities and hacks created by developers and Terminal-level clever folk to work around problems in earlier releases.

The update takes an inordinate amount of time to install – it took nearly 30 minutes on my PowerBook G4, and, for some reason, powered the laptop down even though it was fully charged and plugged in. The startup took another good 10 minutes to complete.

Let’s walk through the big stuff first from the extensive release notes.

Setup Assistant and Login Problems Fixed — While Apple’s notes are rather brief, they speak volumes. “Addresses an issue in which Setup Assistant could unexpectedly appear each time Mac OS X 10.5 starts up” is one; the other, “Improves stability and performance during log in.”

The first resolves the problem I experienced, in which a particular setup file failing to be updated correctly would lead to Setup Assistant launching repeatedly at startup. Apple had posted a technical note on fixing the problem using Safe Boot, but this didn’t work for me, nor for several readers who wrote in to me with similar problems; for many others, Apple’s technique did fix the error.

What’s clear from this note is that the login routine is now checking more extensively as to the state of the computer, especially if an upgrade fails – the root of the infinite Setup Assistant bug.

AirPort Landing Gear Finally Retracted — Apple’s and other forums are full of people finding that their Wi-Fi networks mysteriously work ever more slowly the longer they use Leopard. I haven’t been able to find or determine the cause of this, but Apple promises 10.5.2 “Improves connection reliability and stability” and “Resolves certain kernel panics.” Let’s hope that does the trick.

The translucent menu bar was a misguided effort at showing off alpha transparency – or something. We’re still not sure what. But it sure made the menu bar less useful. In 10.5.2, there’s a checkbox to disable this feature: System Preferences, Desktop & Screen Saver, Desktop tab, uncheck Translucent Menu Bar. Ah, that’s better!

The other irksome change involved disabling a simple list of items when clicking on a docked folder. The Stacks feature was supposed to show us everything at a glance. But it also showed folders as a pile of documents, and wasn’t an efficient way in any of its modes to scan through a lot of stuff. (Matt explained his displeasure with that, with less mortality involved, in “Six Things I Hate about Leopard,” 2007-10-26.)

The 10.5.2 release restores Tiger goodness by adding the option to display a folder as, you know, a folder (instead of a stack), and to view items as a list. Even in the Tiger-familiar mode, you can still sort items by kind, or date added, modified, or created. 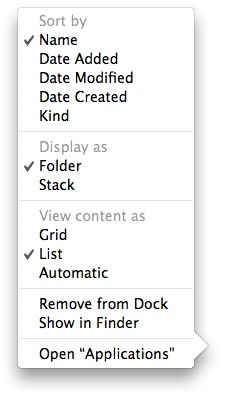 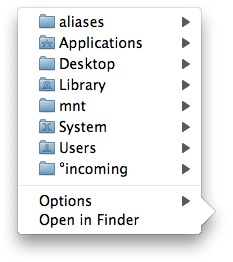 No, Really, Get Back to My Mac — My particular focus in Leopard is Back to My Mac, which has worked erratically or not at all for some people, due to the necessity of having particular router and Internet service provider configurations. (I wrote about this in “Punching a Hole for Back to My Mac,” 2007-11-17.)

Version 10.5.2 ostensibly adds more compatibility through support for more routers, but it’s not clear how that will translate into actual use. I’m hoping for more reader reports, please.

Bits and Pieces — Time Machine now offers a menu in the system menu bar to show the status of backups, note the date and time of the last backup, start a backup immediately, and open the preference pane. Hold down the Option key and a menu item changes so you can browse to find other Time Machine backup disks, too. If your last backup was several days ago, an exclamation point appears within the menu’s icon to emphasize the point.

There are also a number of security-related fixes in 10.5.2 that are sufficiently important that Apple also made them available to users of Mac OS X 10.4 Tiger as Security Update 2008-001. It’s available via Software Update and as standalone downloads for PowerPC- (16.7 MB) and Intel-based (28.8 MB) Macs.

Numerous other small bug fixes – Apple lists over 100 changes in the release notes – should improve a lot of the little stuff in each program and service that was causing crashes or that didn’t work quite right. It’s worth reading the release notes to see if something bugging you is now corrected.

But, Apple, please, can’t you give us more detail than “Improves general stability when running third-party applications”? Thanks loads! I’ll look for General Stability and salute him the next time I see him walking down the street with General Protection Fault.

What’s Not Fixed — Matt runs through what items were fixed out of his list of six things he hated in a companion article, “Leopard 10.5.2: TidBITS Complains, Apple Listens, Sort Of,” 2008-02-12.

An item he didn’t mention originally is something that both Jeff Carlson and I were incredulous about when Apple told us: the fact that you have to double-click a calendar event in iCal to see and modify its details via a pop-up menu. In Tiger, iCal offers the Info panel, which contextually displays details – that you can modify if it’s a local calendar – about whatever you currently select, whether an entire calendar or an individual appointment. This “bug” is still in place.

Mac & macOS Problem Solving
Cookies & Privacy: We wish we were talking about chocolate-chip cookies here, but our Web site—like nearly all others—relies on a few minor digital cookies. Various laws around the world require us to tell you that fact, so consider yourself informed, if not nourished. By continuing to use this site, you agree to our use of these cookies. Cookie and Privacy Notice