MacBook Pro owners have typically had to rely on USB-based modems to use third-generation (3G) cellular networks. Nova Media offers an ExpressCard HSUPA option which can work with a MacBook Pro on AT&T’s U.S. 3G network (and tons of networks in Europe), but which costs €299 ($438). The advantage of an ExpressCard is really the form factor, which hides most of the device other than the antenna – sometimes with an external booster option.

AT&T has now introduced what looks to be the same item from device maker Option, but fully within its subsidized grasp. AT&T’s GT Ultra Express works with Mac OS X 10.4.10 and later, and costs nothing (after two rebates are sent in) with a two-year subscription to AT&T’s data service; that subscription runs $60 per month for unlimited usage. The card will cost $49 with the same contract terms after the second rebate stops being part of a limited-time promotion.

In an unrelated move, Nova Media announced at the same time that their launch2net software (€75/$110) can provide a bit more control over these “new” devices from AT&T than does the free downloadable Mac OS X software. The Nova Media software provides statistics to monitor bandwidth rates and usage, as well as various connection controls. 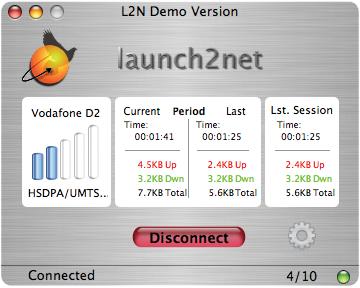 The timing is nice, because this new card coincides with AT&T’s announcement that they would increase upload speeds and add 80 cities (for a total of 350 cities) to their American 3G network deployment. (See “More Mileposts Along Road to 3G iPhone,” 2008-02-06. For an explanation of the various technology used in AT&T’s network, see “Starbucks Deal Brewed with AT&T Has Hints of Apple,” 2008-02-12.)

The GT Ultra Express, along with an identically priced PC Card version called the GT Ultra, is tri-band for 3G flavors and quad-band for EDGE. This lets it work in what AT&T describes as 140 countries – watch those international roaming fees, however!