The venerable AirPort Express now sports 802.11n, the fastest flavor of Wi-Fi, while weighing in at a light-on-the-pockets $99 in the United States. Apple released its revised compact base station today. The AirPort Express can also stream music from iTunes over a network through a built-in combo analog and digital optical audio port using AirTunes, a protocol that Rogue Amoeba’s Airfoil extends to allow any streaming audio output from a Mac or Windows system (see “Airfoil Plays Home Audio Wirelessly,” 2008-03-10). 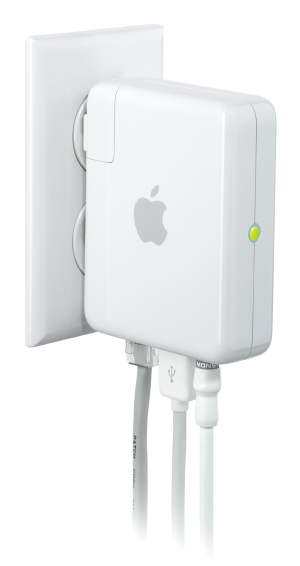 The 802.11n draft standard, currently certified by industry trade group The Wi-Fi Alliance, has reached enough equilibrium that you should be able to mix and match so-called “Draft N” devices with the certified label from different manufacturers. Increased range is a key advantage of 802.11n: multiple internal antennas can extend the distance by which you can get a useful signal by a factor of two to four (Apple is claiming just “up to…twice the range”).

The AirPort Express is among the cheapest devices to handle both the 2.4 and 5 GHz frequency bands. The 5 GHz band is notably useful because of the relatively low usage by consumers; the 2.4 GHz band is in heavy use by Wi-Fi networks, shares its space with other purposes, and has less spectrum allotted to it than the 5 GHz band.

The new version of the AirPort Express still has the same limitations as the old: the built-in USB port handles just a single printer that you can share over a network. This 802.11n model can’t share hard drives or multiple printers; for that, you still need the $179 AirPort Extreme or a $299 (500 GB) or $499 (1 TB) Time Capsule. Apple promises that up to 10 users can access the base station at the same time; 50 can ostensibly simultaneously use an AirPort Extreme or Time Capsule.

The AirPort Express also includes just 10/100 Mbps Ethernet, which will shave off the top possible speeds available with 802.11n. In my testing of the AirPort Extreme and Time Capsule with gigabit Ethernet, I found that using 100 Mbps Ethernet could shave as much as 50 percent off the the top rate and impose other internal speed limitations among Ethernet and Wi-Fi devices.