Bombich Software has released Carbon Copy Cloner 3.1 (CCC), a notable update to the popular disk cloning and backup software. CCC 3.1 implements rsync 3.0 for “greater fidelity” when backing up using CCC’s Copy Selected Items backup method, improves the already solid interface wording that explains what CCC will do for each selected action, adds “bootability” checks to see if the backup volume will be bootable (this doesn’t work with duplicates made over a network, alas), and more. A variety of bugs were also fixed, so backing up to a remote Mac using a path with a space in it uses the correct location,
invisible flags are maintained in Leopard when using Copy Everything, scheduled tasks in Leopard now run reliably after a reboot, and it’s now possible to install CCC’s Authentication Credentials package from multiple source Macs onto a single target machine (previously, manual tweaking of the authorization credentials was necessary to make this setup work).

For those who haven’t used Carbon Copy Cloner, it’s a full-featured cloning, synchronization, and backup program with scheduling and archiving features. I’ve started experimenting with Carbon Copy Cloner to create bootable duplicates of my primary work machines over the network to disks installed inside my Power Mac G4 file server. (This is in addition to Time Machine backups of my Leopard Macs, and Retrospect home folder backups of Macs running Tiger or Panther, all to the same Power Mac G4.) The capability to create a bootable duplicate over a network is uncommon, shared only with EMC’s Retrospect (the excellent SuperDuper can create a backup to a remote disk image over a network, but that’s not bootable). Carbon Copy Cloner’s network
duplicates work much more quickly than those in the current version of Retrospect. 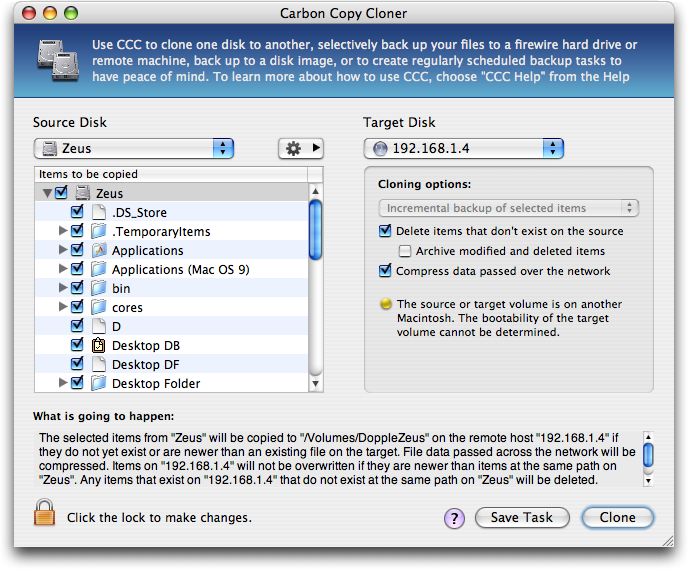 Carbon Copy Cloner 3.1 requires Mac OS X 10.4.8 or higher and works well with Mac OS X 10.5.2. The program is uncrippled shareware, meaning that all features are available whether or not you’ve paid, and no registration is ever required, but Bombich Software appreciates donations once Carbon Copy Cloner has proven its worth to you. It’s a 2.1 MB download.

Problem Solving Security
Cookies & Privacy: We wish we were talking about chocolate-chip cookies here, but our Web site—like nearly all others—relies on a few minor digital cookies. Various laws around the world require us to tell you that fact, so consider yourself informed, if not nourished. By continuing to use this site, you agree to our use of these cookies. Cookie and Privacy Notice