Apple’s iPhone has proven wildly popular around the world, even in countries where there’s no official carrier (see “iPhone the Hot Ticket Item in… Syria?,” 2008-03-24). Although Apple will continue to negotiate deals with carriers in larger countries, we’ve learned that the company has quietly been working on an innovative plan that will enable the iPhone to work literally anywhere in the world.

Already, the iPhone can switch between the EDGE cell data network and Wi-Fi, choosing the best connection at the time, since Wi-Fi offers far more throughput than EDGE, but is available in many fewer locations. With the second generation iPhone, anticipated for the middle of 2008, Apple is widely expected to add 3G data support, which should provide more cellular data bandwidth. But sources have confirmed that Apple won’t just be adding 3G support, but will also be acquiring the Iridium satellite network and giving the second-generation iPhone satellite phone capabilities. With Iridium support, the iPhone will work anywhere in the world, at sea, in the air, and even at the
poles.

i in the Sky — Iridium is a mesh network of 66 communications satellites in low earth orbit aimed at providing a truly global voice and data network. The service came online on 01-Nov-98, but went into Chapter 11 bankruptcy less than a year later, due to the massive startup costs (estimated at $6 billion) of launching so many satellites. Other problems included the decreased cost of terrestrial cell service, increased use of roaming agreements between terrestrial carriers, the high cost of both handsets and service, and management failures. In 2001, the service was purchased by a group of private investors for about $25 million and service was restarted. The new Iridium
Satellite LLC currently has about 250,000 customers, and 2007 revenue may have been as high as $300 million.

Apple will reportedly be paying somewhere in the $500 to $700 million range for Iridium Satellite, marking Apple’s first foray out of the computer and consumer electronic markets (unless you count the AppleLink and eWorld online services, which are better seen as for-fee predecessors of Apple’s current Internet services). Given Apple’s $18.4 billion in cash, purchasing Iridium won’t have a huge effect on Apple’s bottom line, especially given that Iridium is currently profitable.

Much of Iridium’s business comes from the U.S. Department of Defense, which invested to keep Iridium alive and remains the company’s largest customer, paying $36 million per year for unlimited access for up to 20,000 users. Apple is expected to keep the DoD contract, and although the close connection with the U.S. military may cause consternation among some iPhone and Macintosh users, Apple insiders say that the deal may also open up many other lucrative opportunities within U.S. federal, state, and local governments, as well as overseas governments.

The Iridium network offers much less bandwidth even than EDGE, to the point where the Amundsen-Scott South Pole Station had to multiplex 12 Iridium modems together to eke out 28.8 kilobits per second of bandwidth. But it works for voice calls, albeit with some clipping due to the aggressive compression necessary. Apple is expected to increase Iridium’s capabilities significantly with cutting edge radio and signal processing technologies learned from the iPhone design.

Calls Just Want to Be Free — In a bold move, Apple is expected to offer Iridium service on the second-generation iPhone for free, although it will not be possible for a stock iPhone to use Iridium service in favor of a faster terrestrial service or Wi-Fi (in line with Steve Jobs’s comment about voice over IP during the iPhone SDK launch, Apple will build voice-over-IP support into the second-generation iPhone, limiting it to usage over Wi-Fi). Given that Iridium service currently costs between $1 and $14 per minute, Apple expects that this change alone will significantly boost iPhone sales.

Iridium initially needed 1 million customers to break even, so the network is expected to be able to handle that many users, and Apple is betting on being able to take Iridium to the next generation of satellite technology before the current satellite constellation ages unacceptably (it’s expected to last until at least 2010). At that point, Apple will be able to increase Iridium’s throughput to support many more customers and to provide better data performance.

The main downside to Apple adding Iridium support to the iPhone, according to sources within the iPhone hardware team, is that the antenna necessary for the iPhone to communicate with the Iridium satellites makes the sleek iPhone a bit ungainly, as you can see in this picture of a current prototype. Apple hopes to reduce the antenna size, but our sources have expressed concern that fitting the Iridium-capable iPhone into a pocket may not be possible until the next generation satellite constellation comes online, with more powerful and sensitive radios that can be miniaturized into the current iPhone form factor. 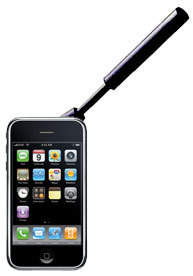 April Fools iPhone, iPad, & iOS Just for Fun
Cookies & Privacy: We wish we were talking about chocolate-chip cookies here, but our Web site—like nearly all others—relies on a few minor digital cookies. Various laws around the world require us to tell you that fact, so consider yourself informed, if not nourished. By continuing to use this site, you agree to our use of these cookies. Cookie and Privacy Notice