The venerable dictionary publisher Merriam-Webster launched an experiment today that combines wiki-like interaction with commercial possibilities: it has accepted a joint sponsorship from Yahoo and Verizon Wireless to redefine the word “unlimited” in the Merriam-Webster online dictionary. 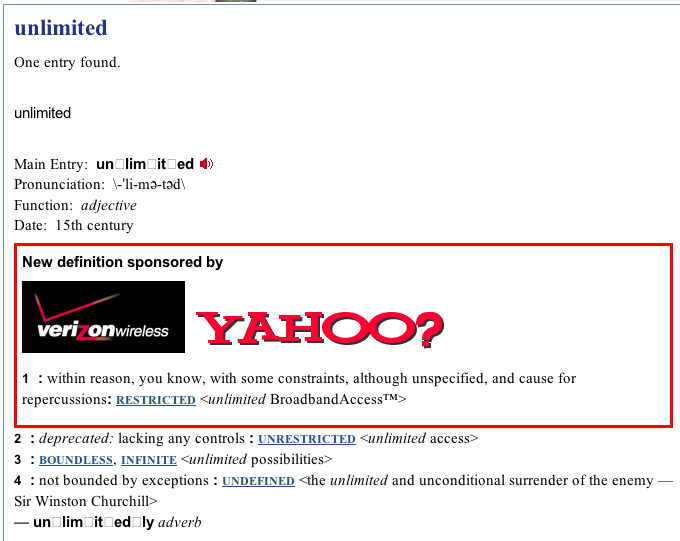 This is the first step in a broader effort for Merriam-Webster to open their dictionary to editor-reviewed user contributions that the company hopes will “increase the accuracy, scope, and timeliness” of the dictionary’s definitions. The sponsored entries, clearly identified as such, “aim to enhance readers’ understanding and embrace of the change in words fostered by corporations,” said editor Michael Pangloss. “We expect a very positive response, and the sponsorship revenue will fund our wik-tionary efforts.”

April Fools Just for Fun Tech News
Cookies & Privacy: We wish we were talking about chocolate-chip cookies here, but our Web site—like nearly all others—relies on a few minor digital cookies. Various laws around the world require us to tell you that fact, so consider yourself informed, if not nourished. By continuing to use this site, you agree to our use of these cookies. Cookie and Privacy Notice