Peter Lewis of Stairways Software has released Keyboard Maestro 3.0, a major upgrade to the macro utility, which also helps users switch among programs and windows, and store and retrieve multiple clipboards. New ways of creating and working with macros in Keyboard Maestro 3.0 include the capability to record macros, enabling and disabling of individual macros and macro groups, and the capability to test macros and individual actions as you’re creating them. In addition to existing triggers (modified hot keys, application events, time, and palette clicks), macros can now be triggered via AppleScript, via a built-in Web server, and by unmodified letter keys (which is occasionally useful).
Keyboard Maestro also adds or improves on a number of actions, such as executing an inline Unix or AppleScript script, brief display of results from Unix and AppleScript scripts, executing Automator actions, logging out, recording macros, simulating a horizontal scroll wheel, and resizing windows. Of particular interest is a new PC Switcher Pack from Rakesh Kumar that provides macros to simulate the keyboard shortcuts people switching from Windows to the Mac would be accustomed to on the PC. 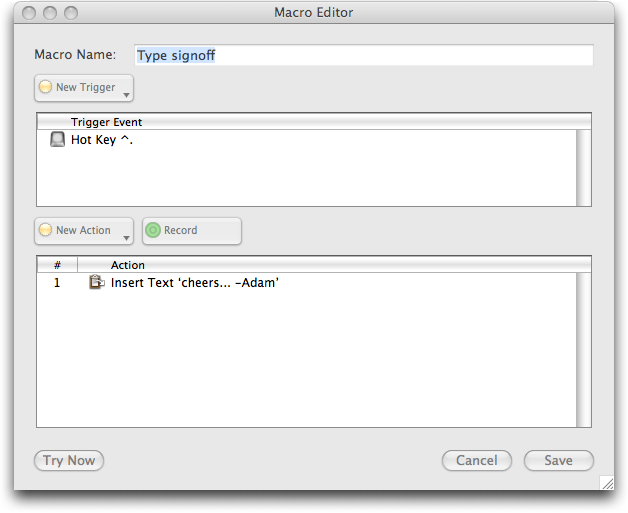 One tip for anyone trying Keyboard Maestro – some of the sample macros may use keys you’re used to performing other actions. I was quite surprised to discover that Keyboard Maestro had remapped Option-Delete to act like Forward Delete (instead of the delete backward by word function that I like in many applications), and even more surprised when F1 played a random song from iTunes instead of launching BBEdit. Of course, the sample macros are easily deleted or adjusted.