When I was reporting from CES in Las Vegas last January, one of the more interesting technology experiences I had was away from the show floor, back in my hotel room. After a long night and little sleep, I decided to watch a little television; apparently this is common in Vegas, as my budget hotel considered a 42-inch plasma TV to be normal furnishing for a room that omitted a couch and a comfortable chair.

There were a few dozen local and cable channels on the menu, and if I found those boring, I had plenty of on-demand movies to choose from. Most amusing: the $40 daily package for both wireless Internet and the entire library of, ahem, adult entertainment. That’s a bundle that knows its target (expense-accounting) audience.

But I had other options, in case there was nothing on, or if the remote control was too far away from the bed. My new Palm Centro had both SprintTV and MobiTV installed; for a few bucks a month, I could catch about 100 channels there. Meanwhile, my MacBook was on the night table, and I had a few movies and a season of The Simpsons on the hard drive.

Then I realized that the cable TV that I pay for is 2,000 miles away; if only I had had the foresight to buy a Slingbox, I could have watched my home Comcast lineup on either my MacBook or my Palm.

I love technology, but this is just whack.

Brave New Digital World — What made all of this particularly interesting was a video that the Consumer Electronics Association was distributing, titled “DTV 101.” Don’t bother looking for a copy yourself; it’s the most boring video you can imagine. Here’s the summary of what the CEA wants you to know:

But if you’re a member of a typical American family, your home is populated with more televisions than people, and each of your older sets will need its own converter. Charmingly, even then your old TV is probably the wrong aspect ratio (4:3 versus the increasingly common 16:9; your widescreen Mac is 16:10, just to make it more confusing), so 25 percent of your screen will generally be filled with thrilling black bars.

Reading between the lines, you won’t be forced to buy one or more new TVs next year, but you’re probably going to anyway. Eventually, your analog sets will go the way of TVs with UHF dials. Note to younger TidBITS readers: “UHF channels” are where we used to go, late at night, to watch really bad movies and sitcom reruns. This is why your parents still think cable TV is niftier than you do, and why we’re amused when you choose to watch TV Land and really bad movies.

The truth is that you will see a vastly improved experience with the new technology. In the past we’ve seen upgrades from black-and-white to color, and from broadcast channel selection to the far greater bandwidth of coaxial cable; digital television, likewise, is the sort of change that will eventually make you wonder how you ever got by in the old days.

Unfortunately, the upgrade is coming with a cost, and one that’s greater than the mere price of a shiny new TV.

Complexity by Design — For example, take a look at this screen capture from the CEA video, showing a standard digital-to-analog converter setup. Look closely at that remote control on the right, which is just for the converter. The people who stick with their old TVs are the demographic least likely to be able to navigate yet another 100-button remote control, but they’re going to be stuck with them. My parents, who lovingly drove me insane with their technology choices, decided that the universal remote control I bought for them was too complicated; instead, they Velcroed three remotes to a triangular Lucite block. For families like mine, it’s time to buy a bigger chunk of Lucite. 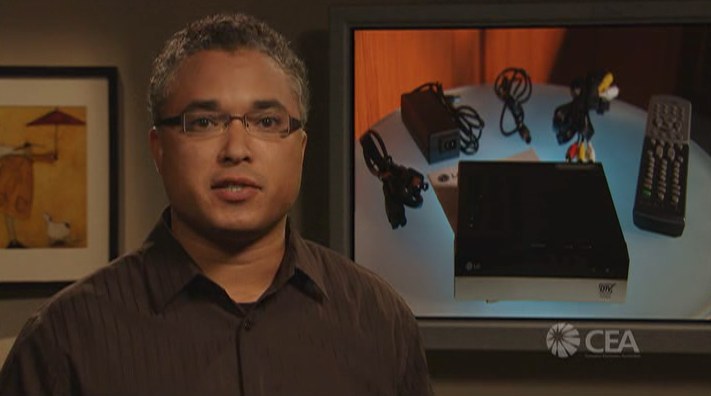 The pernicious issue is that my parents, like most people, saw 400-button remotes as nothing more than an annoying inconvenience. This is extremely odd considering how central television has been to our culture: Americans average over four hours a day watching the tube, and for most people it’s their primary source for news, politics, and what remains of a shared experience in a highly fractured culture. Most of this is true in all modernized societies. Yet for some reason we continue to think that discussion of technologies we use to control television is frivolous.

We have been carefully and methodically trained to believe it’s our fault when important technologies make us feel inadequate and incapable. We have accepted the creation of a category of digital have-nots, who either rely on tech-savvy friends and family, or who do without.

This is not an accident. The seeping loss of control from the individual naturally places that control in the hands of the providers of media and the manufacturers of technology.

A perfect example came when I took the screen capture of the converter that I provided earlier. When I was watching the CEA DVD through Apple’s DVD Player, Mac OS X’s Grab application gave the following error message: “Screen grabs are unavailable during DVD playback.” Due to agreements between the creators of commercial DVDs and computer manufacturers, including Apple, a standard feature of the Mac is disabled during this special case to prevent copyright infringement. In other words, Grab is designed to fail deliberately. As a geek member of the digital “haves,” I knew this issue was easily resolved by watching the same DVD with Videolan’s VLC, which does not trigger the automatic failure.

Take a moment to think about what is occurring here. The consumer electronics industry produces a DVD for the express purpose of writers like me using it to write articles like this one, but my consumer electronics are designed to prevent me from using it. Then I find that I can use it regardless – but only because I am proficient with the technology.

It can only be seen as ludicrous when CEA policy, as implemented in the shipping technology, blocks the usage of CEA’s own media outreach. But ludicrous does not mean laughable or unimportant. The technology is attempting to control how I may use this media; for most people, and many other journalists, that control would be successful.

Control Means Ka-Ching — You’re probably already familiar with one way in which the industry uses technological control to create revenue streams. Let’s say, back in that hotel room, I was struck with a sudden urge to watch Spider-Man 3. I could watch it on Sprint TV, where it would cost $5.99 for a three-day rental, streamed at 320 by 172 resolution. I could purchase (but not rent, as of a few weeks ago) the movie from the iTunes Store for $9.99 and watch on my MacBook. I could rent it on-demand in my hotel room, which would give me a plasma screen picture, but would cost $11.99 for 24 hours. Or with my MacBook and MasterCard in hand, I could wander down the street and rent a DVD with all the extras from a
kiosk for $1.99. Of course, if I already owned the DVD, and had left it at home, that wouldn’t have mattered at all; the cost to rent another copy remains the same.

Unless, of course, I spent 30 seconds setting up an illegal Internet download, which would give me a permanent copy, at an arbitrarily high resolution (up to and including Blu-ray, if I had the patience), that I could watch anywhere regardless of whether I had purchased the physical media, or had it with me.

Most of us have in some sense already paid for Spider-Man 3, as well as hundreds of other movies: they’re part of a river of programming that show up on our television systems. But unless you’ve set up some form of digital recording system, unless you’ve figured out how to move those videos from there to your computer, unless you’ve mastered converting those videos into other formats, those videos stay locked in their own walled gardens. Many of us have done all of the above, but the vast majority have not and cannot. This allows Columbia Pictures to claim that mechanism is as important as content, which is why the same movie can be $12 in one place, $2 in another, and time-limited everywhere.

This is great for the studios, but it’s not how the audience thinks (or should think) of their product. Paying for some form of content should directly connect to real received value: a performance of a movie in a theater. A DVD with additional commentary and deleted scenes. And yes, convenient on-demand availability, when appropriate. But too often, the “value” is based upon an indirect conspiracy to make it difficult or impossible to use the media you’ve already paid for, making the end result a tax on the technological have-nots.

Going forward, this situation is primed to worsen steadily. As I mentioned earlier, there are Trojan horses in the digital television picture, as copyright protection mechanisms such as HDCP are unavoidably bundled with new hardware. Already it is clear that the technological elite will always be able to circumvent such mechanisms, and if not, will probably continue to be able to “borrow” content from the Internet in formats that allow the freedom that can’t be paid for.

Free Speech, Not Free Beer — I want to be clear which argument I am not making. We do not and should not have unlimited rights to any and all media. I’m not arguing for the abolition of copyright; even authors who serially release their works into the public domain or Creative Commons would insist upon their right to continue to choose to do so.

Likewise, it’s a diversion from my argument to frame this solely in terms of economic cost. Cost is an issue, of course, but not the primary one; there is nothing unethical about Columbia Pictures attempting to charge me $12 to watch a movie in a hotel room. What is unethical, in my view, is the crippling of essential technologies for the sole purpose of allowing that $12 tax on the technologically unsophisticated to exist. The question we need to ask ourselves is not how we need to protect the creators of content, but rather, what societal costs are we paying when technology is designed to fail because we value protecting a movie over all other uses the technology may have?

There should be a way to create consensus on how we should interact with media. Restrictive technologies, computers that are designed to fail, and punitive laws that prop up those technologies do not advance that discussion or society in general. The more we tolerate such activities, the more we purchase these products with no argument, the greater the danger that we allow the 21st century to develop with corporate control trumping our rights to free speech amongst ourselves. There’s more to come, so stay tuned.

[Special thanks for valuable commentary on drafts of this article go to Adam Engst, Tarleton Gillespie, Peter Hirtle, and Fred von Lohmann. Jeff will be presenting a talk on this topic to IEEE Philadelphia on 20-May-08.]

PayBITS: Interesting thoughts about our digital future? Why not

send Jeff a few bucks via PayPal to help cover his CES expenses?

Opinion
Cookies & Privacy: We wish we were talking about chocolate-chip cookies here, but our Web site—like nearly all others—relies on a few minor digital cookies. Various laws around the world require us to tell you that fact, so consider yourself informed, if not nourished. By continuing to use this site, you agree to our use of these cookies. Cookie and Privacy Notice