Microsoft’s Macintosh Business Unit last week released Microsoft Office 2008 Service Pack 1, fixing numerous bugs and improving security and performance in the process of bringing the Office applications to version 12.1.0. Microsoft also announced that Visual Basic for Applications (VBA) would be returning to the next major release of Office for Mac.

Microsoft’s extensive release notes document over 150 bugs and improvements in Office 2008 SP1, making the update an important one for all Office 2008 users. In addition, Microsoft has fixed a security vulnerability in Word that could have enabled remote code execution if the user opened a specially crafted Word file. (Note that if you’re still using Microsoft Office 2004, the Office 2004 for Mac 11.4.2 Update addresses this vulnerability.) The Office 2008 SP1 Update also includes all the changes that were part of the previous Office 2008 for Mac 12.0.1
Update (see “Important Updates Released for Office 2008 and 2004,” 2008-03-11).

The Office 2008 SP1 Update is available through Microsoft’s AutoUpdate utility (most easily accessed by choosing Check for Updates in the Help menu of any Office 2008 application) or as a standalone 180 MB download. The update requires Mac OS X 10.4.9 or later. Before updating, make sure that the Microsoft Office 2008 folder is located in the Applications folder on the startup volume, that you have not renamed or modified any of the files in the Microsoft Office 2008 folder, and that you are installing while using an administrator account. In addition, users who previously installed a beta of Office 2008 need to remove and
re-enter the Office 2008 product key, and anyone who had trouble deploying Office 2008 SP1 via Apple Remote Desktop or the command line last week should download the update disk image again to get a version that has an installation script error fixed. Aside from all that, on both of my Macs, the updater just sat there until I clicked Run in an odd “quit_apps” script dialog that appeared behind the main installer window (it took me a while to realize what was preventing the installer from continuing). 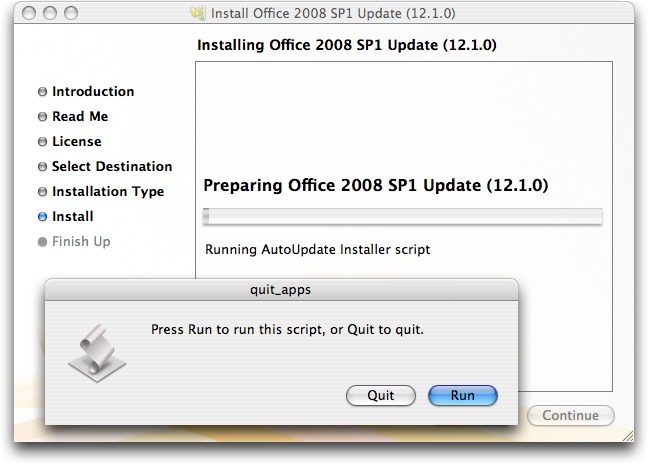 In the announcement, Microsoft’s Craig Eisler also said, “We are very clear that Visual Basic for Applications (VBA) is an important feature to certain customers, and we will be bringing support back for VBA in the next version of Office for Mac – along with continuing our support for AppleScript.”

Office users who relied heavily on VBA for workflow and automation, particularly in ways that would work for both the Mac and Windows versions of Office, have been troubled by the lack of VBA support in Office 2008. That’s undoubtedly a small part of the overall Office user base, but a particularly involved and vocal segment that is faced either with sticking with Office 2004 (which lacks optimal performance on Intel-based Macs) or relying entirely on Windows versions of Office.

So although it’s certainly positive to see Microsoft announcing that VBA will resurface, “the next version” of Office could mean a 2 to 4 year wait, which is an awfully long time for those who need VBA. Microsoft told Macworld that the problem with supporting VBA was related to the PowerPC architecture of the VBA support in Office 2004, and supporting VBA in Office 2008 would have required cutting features or delaying the product even longer than the three-and-a-half years between the releases of Office 2004 and Office 2008.

Problem Solving Productivity Tech News
Cookies & Privacy: We wish we were talking about chocolate-chip cookies here, but our Web site—like nearly all others—relies on a few minor digital cookies. Various laws around the world require us to tell you that fact, so consider yourself informed, if not nourished. By continuing to use this site, you agree to our use of these cookies. Cookie and Privacy Notice