Most technical authors aren’t wild about taking screenshots because setting up a good screenshot can take longer than writing about it. You have to make sure fields are appropriately filled in, the pointer is showing appropriately, and the window is the correct size. This last bit is often tricky, since moving and resizing windows with the mouse is inherently a loose operation – pixel-perfect alignment is difficult.

However, there’s now a utility that can help both authors and anyone who prefers to use the keyboard as much as possible: Helium Foot Software’s MercuryMover. It’s a small preference pane that brings to the keyboard two basic functions that are generally restricted to the mouse: moving and resizing windows. Press a user-configurable keyboard shortcut (the default is Command-Control-Up arrow), and a translucent heads-up display appears with instructions telling you how to move the frontmost window using the arrow keys. Two other keyboard shortcuts help you resize windows up/left and down/right. (Requiring the user to think about which way a window should be resized seems unnecessarily
baroque, but it’s unavoidable, due to needing all four arrow keys to expand and contract in both situations.) You can also switch among the three different move/resize modes while the heads-up display is showing. See my screencast for a live tour through MercuryMover’s preferences and usage. 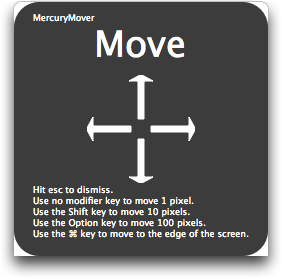 Once the heads-up display is showing, a single unmodified arrow key press moves or resizes the frontmost window one pixel, but by holding down a modifier key as you press an arrow key, you can move or resize the window 10 or 100 pixels at a time, or take it all the way to the edge of the screen. Pressing = centers the window, and pressing + expands the window to the full size of the screen. Once you have the window looking the way you want, press Escape or click the mouse to dismiss MercuryMover. If you’ve made a mistake, Command-Z and Command-Shift-Z work as expected to undo and redo your actions, while the heads-up display is still showing. Using MercuryMover is easy, and I suspect that if you use it regularly, its keyboard shortcuts
and controls will become second nature.

Much as it’s a slick little utility, MercuryMover isn’t perfect. Although it could resize Eudora’s windows, Eudora didn’t always redraw the window contents to match. I suspect there may be other older applications that suffer similarly.

While using the current version of MercuryMover, I found myself wishing it would let me set exact window dimensions and locations by typing in numbers and recall those settings later in order to keep screenshots consistent, something that’s devilishly difficult now. Happily, before I even suggested the feature to Keith Alperin, MercuryMover’s creator, he told me that the next version will “display the size of the current window and will also have a facility to ‘bookmark’ specific sizes and/or positions. I call these my screenshot features.” I hope that next version is available before I need to update my iPhoto Visual QuickStart Guide again; for this last update, I found myself using screenshots from the previous edition as templates
for getting the iPhoto window sized properly for particular screenshots.