Continuing on their quest to meet and exceed the standard set by Nisus Writer Classic, Nisus Software has released Nisus Writer Pro 1.1. Most notably, the new version adds what appears to be a nicely considered comment feature, positioning comments off to the left side of the document in a parallel pane. Comments can be collapsed to just a header, responded or added to by clicking a + button, and deleted by clicking a – button. The only negative is that I couldn’t see any way to expand a comment with multiple additions to see a back-and-forth discussion all at once. Nisus says that comments are compatible with Microsoft Word. 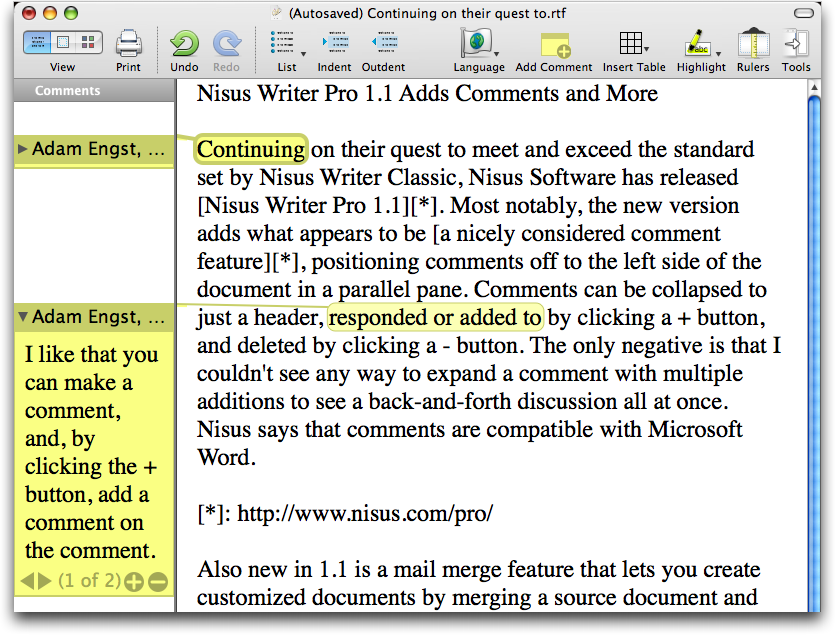 Also new in 1.1 is a mail merge feature that lets you create customized documents by merging a source document and either data from Address Book or a comma-separated value text file. You can also add bits of Perl code to customize documents further.

Less significant features include additional macro commands, page numbers in the status bar, a “Go to Page” feature that simplifies navigation in longer documents, the capability to redefine a style based on the current selection, a Page Borders palette that works on selected sections, a preference to control the thickness of the insertion point, preservation of fonts in a document that aren’t available on the Mac on which the document is being opened, and an option in the Open dialog to ignore rich text commands so HTML documents can be opened as plain text (rather than interpreted). Nisus Writer Pro 1.1 also incorporates numerous bug fixes and performance enhancements that should
speed up typing and display rendering, especially in Mac OS X 10.5 Leopard.

With these changes Nisus Writer Pro also comes closer to being able to compete with Microsoft Word for serious word processing. However, until Nisus Writer can do change tracking, it won’t be able to take over from Word in collaborative workgroups that share documents around for editing as well as commenting. Even if a future version of Nisus Writer Pro were to add change tracking, I’m concerned that Nisus isn’t putting enough effort into rethinking what a modern word processor should be able to do – merely recreating Word’s feature set isn’t enough. Arguably, most writing today has the Web as the ultimate destination, and smooth collaboration (both sequentially and in real-time) is becoming ever more important. If a small company like
Nisus can’t meet those needs in the relatively near future, the field will undoubtedly be ceded to the online word processors like Google Docs, Zoho Writer, Buzzword, or a promising newcomer like TextFlow.

Nisus Writer Pro 1.1 is a universal binary and requires Mac OS X 10.4 or later. The upgrade for existing owners of Nisus Writer Pro is free. New copies cost $79, and a 3-user “family pack” for individuals, families, and small office users is available for $99. Upgrades from Nisus Writer Express cost $45. A 15-day demo is available.

Productivity Tech News
Cookies & Privacy: We wish we were talking about chocolate-chip cookies here, but our Web site—like nearly all others—relies on a few minor digital cookies. Various laws around the world require us to tell you that fact, so consider yourself informed, if not nourished. By continuing to use this site, you agree to our use of these cookies. Cookie and Privacy Notice