After a seven-month public beta, the Mozilla Foundation has released Firefox 3, a major update to the open-source Web browser that is the Internet’s second most popular browser, with between 16 and 18 percent of the overall usage share, depending on whose numbers you believe. (The second position holds within the Macintosh world as well; on our site, for instance, 46 percent of visitors use Safari on the Mac, with the Mac version of Firefox second at 17 percent. Windows users visiting our site use Internet Explorer and Firefox nearly equally, representing 14 and 13 percent of visits, respectively.)

Whereas Firefox 2 was arguably a good browser, it could barely be considered a Macintosh application, but it looks as though Firefox 3 may significantly improve the user experience for Mac users. Most notably, a new theme provides a more Mac-like look and feel for Firefox 3, so it doesn’t feel nearly so much like a port from another operating system. Firefox 3 also supports Growl notifications for completed downloads and available updates, and the up and down arrow keys now act like they should in a Mac application and move to the beginning and end of text fields.

On the downside, Firefox lacks any of expanding text areas like OmniWeb and Safari, still doesn’t support the Mac OS X Keychain, and, although I’ve seen claims that it supports Mac OS X’s built-in dictionary, I haven’t been able to verify that in practice. There’s also an unusual (but fixable) incompatibility with Web sites built in iWeb 2.

Other changes fall into several categories – improved ease-of-use and personalization, performance, and security. Hang on, since this is a bit of a ride.

Ease-of-use and Personalization — If you’ve always hated being asked to save a password for a secure site before you’ve logged in (making it easy to save an incorrect password), you’ll like Firefox’s new information bar, which drops down to provide controls for saving passwords. Since it’s non-modal, you can wait until you’ve logged in successfully to save the password.

A new download manager lists the dates on which files were downloaded, provides a search field for finding downloads based on name or site, and lets you open, reveal, or link to downloads easily. If a download fails, you can resume it (though I wouldn’t bet on this working universally).

Numerous interface controls have been improved. A single slider makes it easy to resize the location bar and search bar simultaneously. The Find toolbar at the bottom of the screen now opens with selected text already entered – you can still set an option to do a quick-find just by typing when not in a text-entry field.

Speaking of text, you can now select discontiguous chunks of text by holding down the Command key while selecting; Firefox 3 also supports double-click and drag to select by word, and triple-clicking now selects by paragraph. A new zoom feature accessible from the View menu or via the keyboard zooms either all items on the page or just the text.

Although I’m not familiar enough with Firefox 2 to see the changes, Mozilla claims that in Firefox 3 tabs are easier to locate in the tab “quickmenu” (a pop-down menu on the right side of the tab bar) and that Firefox 3 prompts you to save tabs on exit (I always enable the option to re-open windows and tabs automatically). The Open All in Tabs feature now appends to the current tab set, rather than overwriting it, and new smart folders collect recently bookmarked sites, recent tags, and your most visited pages. I obviously haven’t used Firefox 3 for long, but I’m quite intrigued to see how useful the new Most Visited smart folder will prove.

Tags on bookmarks are a new feature; since it’s often difficult to find bookmarks after the fact, you can now add tags of your own devising. Once added, you can use tags to find sites in Firefox’s new smart location bar feature, which matches what you type with URLs from the history, page titles from the history, bookmark titles, and bookmark tags. Unfortunately, despite all this, Firefox’s location bar still cannot expand text such as “apple/support/downloads” to “http://www.apple.com/support/downloads/” like Safari and OmniWeb can; Firefox still falls back on Google in such situations. (Although falling
back on Google is probably a good idea for most people, it’s worth noting that the Mozilla Foundation also receives revenue from ads shown in Google search results.) Another improvement in the location bar is a star icon that you can click once to add the current URL to your bookmarks, storing it automatically in an Unsorted Bookmarks category. Click the star again, and you can remove the bookmark, name it, file it, or add tags.

Although I’ve never been a big fan of tags, or even of bookmarks, in the past, I’m contemplating using them as a way of eliminating tab buildup. I end up with tons of open tabs in OmniWeb (which is very good about not losing track of them), so much so that some of them have been open for months. That’s patently ridiculous, so I’m considering using Firefox’s new bookmarking and tagging features to save bookmarks to such pages with tags indicating why I thought the pages were worth saving. Perhaps one is an interesting article, or another provides background for a story I want to write, or a third is a piece of software I should test. Perhaps tagging will let me put them out of sight in such a way that I can get them back if
necessary.

A new Library window provides an interface for managing all these bookmarks, tags, and history items. If you end up with too many items (particularly in the history) to browse through reasonably, you can search through any collection in the Library. Even more interesting is the fact that you can save those searches as smart folders. So, for instance, I’ve done a search on “ebook” in my history and saved that as a smart folder; in theory, it should collect all the sites I visit that talk about ebooks. It doesn’t appear as though you can mix bookmarks and history items in a smart folder, but perhaps that makes sense, since the history items will eventually disappear, unlike bookmarks. 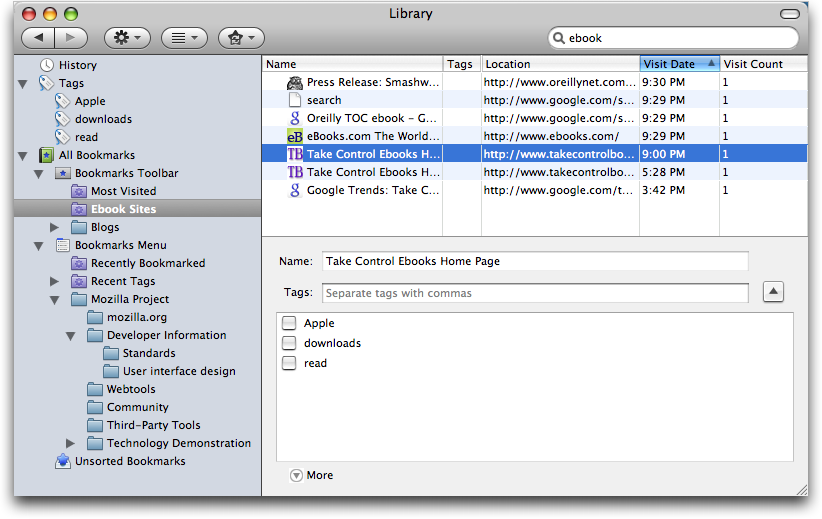 Lastly, the new Add-ons Manager available from the Tools menu lets you find new add-ons and manage them. (“Add-ons” include extensions that modify Firefox’s behavior, themes that change the look and feel of the program, and plug-ins that add new under-the-hood functionality.) I’ve appreciated certain Firefox add-ons in the past, but their constant updates can be annoying as well, so I’m hoping that this new interface makes it easier to try out new extensions and uninstall them quickly if they’re a pain.

Performance — Although I firmly believe that the browser’s interface is what makes the difference, which is why I’ve stuck with OmniWeb even during the ascendance of Safari, for many people, raw browsing and rendering speed is equally important. Honestly, that’s one area I’ve found OmniWeb lacking, especially when it’s dealing with lots of open tabs, which consume hundreds of megabytes of virtual memory. Safari 3 feels a bit faster than OmniWeb, but not so much that I’ve switched to it as my primary browser. Still, it’s always open, and I use it regularly for certain tasks.

In my initial use, Firefox feels noticeably faster than both OmniWeb and Safari 3, and Mozilla claims that the program has significantly improved performance due to improved memory usage. Also improved is JavaScript performance, which should help in Web apps like Google Docs.

Firefox’s new Gecko 1.9 rendering engine also provides better performance, along with support for new Web APIs (like offline support for Web apps that use it), and improved standards compliance. According to the Wikipedia entry on Firefox, version 3 is the first official release of a Mozilla browser to pass the Acid2 standards-compliance test, and it does better on the Acid3 test than Firefox 2.

A new but hidden feature is the capability to display images using their color profiles (data written to the image file that helps applications display the color correctly). Safari does this by default, and it can help photos display more accurately than in Firefox 2, although with a 10 to 15 percent performance hit in displaying images. To enable color management, type “about:config” in the Address bar, and after a warning – making configuration changes could lead to instability – type “gfx.color” in the Filter field to locate the gfx.color_management setting. Double click it to toggle the Value field from false to true, then close the window.

And although this won’t directly speed up everyday browsing, Firefox 3 now stores all bookmarks, history, cookies, and preferences in a transactionally secure database format that should prevent data loss even in the event of a crash. Crashes may not take much time if they don’t destroy data, but a crash that requires you to restore an old set of bookmarks from backup can waste a lot of time.

Security — Mozilla has also directed a lot of effort into making Firefox more secure. You can click the favicon (the tiny little icon in the location bar, next to the site’s URL) to see more information about a site, although this feature seems to provide identity information about the site’s owner only for https URLs (even Mozilla’s own site lacks identity information). Sites that use Extended Validation SSL certificates (like PayPal) have a green favicon and display the site name.

Even better, Firefox 3 displays a warning whenever a user tries to visit a site that has been reported as trying to infect your computer or as a forgery (phishing) site. This feature uses the Google Safe Browsing protocol. 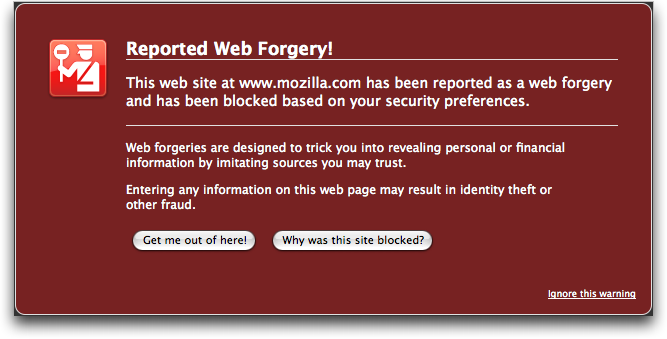 Try It Out — It’s always difficult to get a feel for a new Web browser without actually living in it for a while, so I’m planning on doing just that. One day may be enough to tease out most of the new features, but a Web browser is one of the tools upon which I rely constantly; like a carpenter’s hammer or a doctor’s scalpel, it has to come to hand perfectly and perform exactly as expected or I’ll find another browser that fits my needs better.

And so, if you’re at all curious about how Web browsing could be different with Firefox 3, I suggest you give it a try too. Set it as your default browser and see how it works for at least a few days, paying special attention to the new features that might set it apart from Safari or OmniWeb or Camino or Opera or iCab or whatever other browser has become your tool of choice.