MobileMe, Apple’s replacement for its long-running .Mac service, kicked off to a rocky start last week following what was supposed to be an overnight transition. (For an overview of what’s changed between the two services, see “.Mac Morphs into MobileMe,” 2008-06-09.) The crush of activity on Apple’s servers during the iPhone 3G launch and release of the iPhone 2.0 software further crippled the service, but its performance appears to have stabilized.

If you’re wondering just how to update to MobileMe in Mac OS X 10.5 Leopard, there’s a trick – it doesn’t automatically appear in Software Update, nor is it available as a download from Apple’s downloads support page (at least, at the time I wrote this article). Instead, go to System Preferences and click the .Mac preference pane, where you will be prompted to download the update. After you apply it, simply close System Preferences and open it again to find the MobileMe preference pane in place of .Mac; you don’t need to restart the Mac. 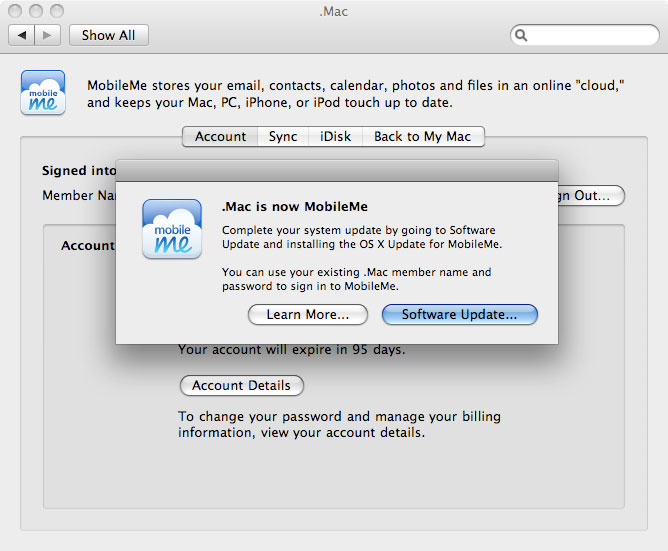 So far, Apple hasn’t signaled how or if .Mac will be updated in 10.4 Tiger or earlier releases of Mac OS X.

Bumpy Rollout — Users were greeted for most of Thursday with a routine message with few details; on Friday, the message was upgraded with slightly more useful information, but no apology nor estimated time until the service would be usable again:

“The MobileMe transition is underway but is taking longer than expected. While core services such as desktop mail, iDisk and sync are available, the new MobileMe web applications are not yet online. Thank you for your patience as we complete the upgrade.”

While MobileMe wasn’t slated to launch until Friday, July 11th, Apple planned to perform some heavy lifting on Wednesday night, with a plan to finish in the wee hours of Thursday.

The service finally launched at me.com sometime between Friday night and Saturday morning. MobileMe’s Web 2.0 applications were briefly available at times on Friday.

Apple made no other public comments on the matter, according to several Mac industry and mainstream articles. This is what is known as an “epic fail,” to use a phrase common for its terseness in Twitter: a transition key to the company’s relationship with its individual users has gone horribly wrong.

Hoping for a Smooth Road Ahead — The good news is that the ease of use of the new system is extraordinarily high. Apple has managed to instill the feeling of a desktop application into a Web-based one; it’s about the best I’ve seen. The Mail screen, for instance, is far more polished and interactive than Google’s Gmail, which has been under development for years. You can make contiguous and non-contiguous selections, drag and drop, and use Control plus various keys for menu selection or actions. In iCal, for instance, you press Control-right arrow to move forward a week in the week view.

.Mac synchronization has been the bane of my life for years, with it working erratically, duplicating entries, and working magically without intervention for periods of time. During the MobileMe transition, my laptop Address Book locked up, and despite all efforts won’t synchronize at all even when it says it has. (I’ve deleted its data store, reset the sync, and repaired disk permissions. The error log for “dotmacsynclient” persistently shows obscure errors that I can’t find via Google; Apple’s message boards have search disabled due to high load.)

My office desktop Mac restored hundreds of entries I’d deleted on multiple computers, many of them duplicates of existing entries, and which must have been cached at .Mac. I went through and reculled my contacts. My iPhone initially had problems picking up changes from my desktop Mac via MobileMe, but ultimately appears to be handling the new push service just fine. It’s awfully nice to be able to change a contact’s phone number or update a calendar entry and have it flow through everywhere.

How did Apple get in this mess? Obviously by leaving themselves too little time, and deciding to do a full power-off/power-on switchover, which is a known method of producing epic failures. The more intelligent move would have been to delay the MobileMe launch, and open it up to current subscribers to move in small numbers, offering a “transition” button that would have converted data stores from .Mac to MobileMe. The architecture certainly would have allowed that.

But Apple had a lot staked on having a successful iPhone 3G launch, and wanted iPhone 2.0 software, MobileMe, and the new phone to appear simultaneously for the biggest bang. Well, they got a bang; no one can deny that.

[Note: This article was updated to explain that the MobileMe software update applies for now only to Mac OS X 10.5 Leopard.]