My sister called my cell phone out of the blue on Friday. “Hey, did Apple release something today?” she asked. “There’s a huge line at University Village.”

This chance encounter was one of the highlights of a long day spent in line at the launch of the iPhone 3G at Seattle’s University Village Apple Store.

Glenn Fleishman and I debated whether there would be a big turnout for Apple’s revamped phone. Last year, the first iPhone seemed like a much bigger deal: not just a brand new product from Apple, but a smartphone that appeared to eclipse other cellular phones on several fronts. This time around, the changes are more modest, with improved 3G data speed and built-in GPS. The new software features are great, but they’re available to anyone who owns a first-generation iPhone. Surely there wouldn’t be the same kind of interest on opening day.

The approximately 400 people in line proved us wrong.

Activation Woes — I arrived at 8:00 AM, just as the doors opened and the first five customers were let into the store. Those hardy (crazy?) folks started lining up Thursday at 5:30 PM.

While the crowd size seemed similar to last year’s launch, the time it took to get an iPhone was certainly different. The original experience was genius from the customer’s point of view: you bought an iPhone, took it home, plugged it into your computer, and activated it through iTunes. The disadvantage, from Apple’s and AT&T’s points of view, was that people could purchase iPhones and never sign up for AT&T’s two-year service commitment, instead reselling the phone to other markets or unlocking the phone using “jailbreak” software to use with other providers. Under that arrangement, both AT&T and Apple lost out on monthly service fees, since Apple received a percentage of each subscriber’s monthly fee.

This time around, AT&T is subsidizing the cost of the iPhone’s price, Apple only gets a cut when the phone is sold (or buyers later purchase software from the iPhone App Store), and buyers must sign up for a service plan and activate the phone at purchase. And with potentially a million people worldwide buying the iPhone 3G on Friday as it went on sale in 21 countries, activation proved to be glacial.

Almost 40 minutes passed before the first iPhone 3G came out, carried by a sleepy-looking man who seemed startled that a television cameraman, two photographers, and reporters from the big daily papers wanted to take his picture and get his opinion. 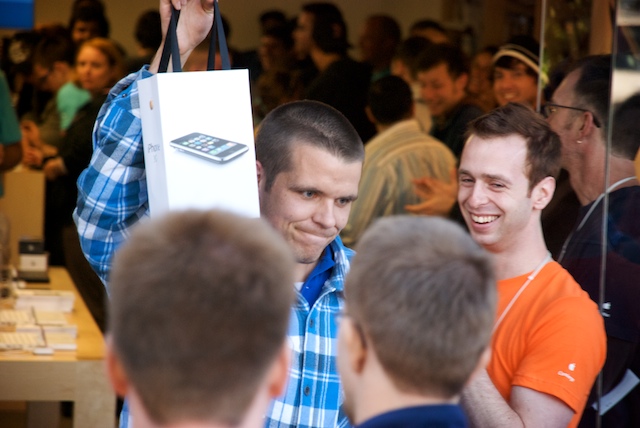 I assumed the problem lay in AT&T’s servers, which crumpled under the load last year. According to an anonymously sourced quote in the Seattle Times, however, the problem had more to do with Apple’s servers. Despite the advance word that all activation would happen in store, the iPhone 3G needs to be first registered on AT&T’s systems and network, and then activated through an Apple process that uses the iTunes Store. By the time the west coast began selling iPhones at 8:00 AM, the rest of the country had been hammering Apple’s servers for hours. But that was likely just a fraction of the load, thanks to Apple’s decision to simultaneously
release the iPhone 2.0 software for existing iPhones (which led to many people temporarily owning upgraded but unusable devices for much of the day).

Trying to buy an iPhone 3G at an AT&T store proved to be no relief. Several AT&T stores sold out of supplies early – one person near me in line said that the first store he visited sold out in 20 minutes. Another guy spent three hours in line at a different AT&T store before being turned away.

Awesome Apple Employees — I don’t mean to disparage AT&T, but here’s why I never considered buying an iPhone 3G anywhere but at an Apple Store: the employees at the University Village store – and I presume elsewhere – bent over backwards for their patient customers.

Throughout the day, the employees gave out free bottled water (and collected empty bottles for recycling), wandered along the line offering to answer any and all questions, and made sure we all understood the limitations that could scuttle a purchase. (If your phone is paid for by your company, or you have some discount that would apply, you need to deal with AT&T directly. One Apple specialist pointed out that he wasn’t able to buy a new iPhone at the store because Apple is a corporate customer of AT&T.) As time passed, a pair of employees arrived with a cart full of free cookies. And as the sun rose in the sky, they came bearing sunblock and large umbrellas. [Editor’s note: I walked by the same Apple Store on Sunday, mid-day, and saw
a line of about 50 people in the 80-degree F weather, and Apple Store employees handing out water and snacks, while making sure new additions to the line were up to speed on policies. -gf]

Throughout the long day, in fact, I never once saw anyone get angry or frustrated. Several people got tired of waiting, or had other commitments and couldn’t stay, but they exited with a hearty “good luck” to those of us who stuck with it.

Captive Audience — The smarter retailers in the University Village complex recognized the opportunity to pitch their wares at hundreds of potential customers who weren’t going anywhere fast. Jamba Juice was giving out free samples of their blended smoothie drinks; Fran’s Chocolates had a plate of hazlenut chocolate truffles; and The Ram, the restaurant next door to the Apple Store, was giving out menus and offering to bring orders out to people in line. One fellow, tired of waiting in line, offered to buy someone’s first-generation iPhone (though I saw him exit the store at the end of the day with an iPhone 3G after
all). 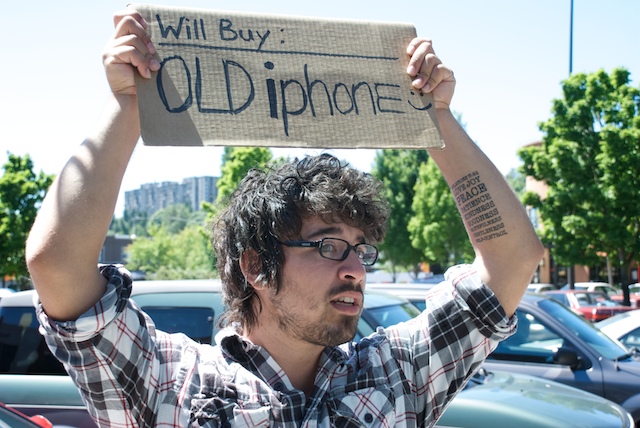 Some of the marketing didn’t go over as well, such as the chiropractor handing out postcards or the Verizon van cruising through the parking lot. One woman crossed the line ahead of me saying, “Who wants a high-five for Verizon?” She wasn’t giving out information, and we couldn’t tell if she was a Verizon employee or just someone having fun at our expense. But when someone asked why they should high-five for Verizon, she replied, “Well, no one is high-fiving for AT&T.” I guess she had a point.

A local developer, Nathan Hunley of Igloo Games, was handing out cards to publicize Dizzy Bee, the iPhone game he had finished and uploaded to Apple the night before. Dizzy Bee uses the iPhone’s motion sensor to control a bee who bounces around maze-like levels attempting to free captured fruit. (Despite that description, Nathan appeared to be as sane as one would expect a sleep-deprived developer to be.)

At Last, Activation — I ended up spending only a few minutes in the Apple Store itself. Once inside, an Apple specialist introduced me to one of the Apple geniuses who would be my own personal iPhone shopper for the day. I told him that I wanted a black 16 GB model (all three configurations were in stock) and no accessories. “Great,” he said, “I’ll go get one and meet you outside.”

At a table under an umbrella, we activated the phone wirelessly. He plugged my information into the Symbol handheld device each employee uses – the concept of going to a register to pay for your purchases is almost extinct at Apple Stores; you can buy what you need anywhere on the floor from an employee.

He wasn’t able to answer my one question about the AT&T plan. The iPhone 3G is actually my wife’s birthday present – I’m keeping my first generation iPhone for now – and I didn’t know how the addition of another iPhone would affect our FamilyTalk plan. Would the 200 text messages included on my monthly plan go away? The information at AT&T’s Web site lists only two options for FamilyTalk plans: $30 per month for unlimited messages or a $0.20 per-message charge. To my surprise, the system gave me the option of choosing the individual plan options for my wife’s line. He pointed out that if the billing got messed up, I’d have to work it out with AT&T separately. (Checking my account at AT&T’s Web site so far reveals that we’re paying $30
more per month for the iPhone 3G, plus the $5 fee for 200 messages, which I chose because that’s the easiest route for her; note that it is possible to send SMS messages at no cost using AIM.)

The First-Day Appeal — So how long did I wait in line for an iPhone 3G? Did I turn out to be one of the crazy ones? To be fair, I probably would have bailed early on and come back when the initial enthusiasm died down if I wasn’t covering the iPhone 3G and the event as a journalist. Instead, I held out – for 8 hours.

But here’s the funny thing about standing in line with like-minded folks: 1 hour becomes 3 hours becomes 5 hours becomes 7 hours (that eighth hour was a bit much, honestly). It wasn’t a party, but it wasn’t a slog, either. The novelty of having one of the first iPhone 3G units will wear off quickly, but the experience of doing something out of the ordinary with a lot of people, like watching a live concert instead of just listening to an album of the same music, is worth doing on occasion. I joked in line that someday we could tell our grandchildren about the time we stood in line for hours to get an iPhone, and a fellow next to me pointed out that our grandkids will probably just have implants and not understand the concept of a
“phone.”

iPhone, iPad, & iOS Opinion
Cookies & Privacy: We wish we were talking about chocolate-chip cookies here, but our Web site—like nearly all others—relies on a few minor digital cookies. Various laws around the world require us to tell you that fact, so consider yourself informed, if not nourished. By continuing to use this site, you agree to our use of these cookies. Cookie and Privacy Notice