Though relatively late to the mapping game, Google Maps has become one of the top sites for viewing maps, getting driving directions, and more. Now the Google geeks have added walking directions to Google Maps, eliminating the logic that routes cars the correct way down one-way streets and taking into account pedestrian-only pathways when possible.

Since we were just travelling in England, I asked for walking directions from the Old Mill Hotel (built in about 1500, where we stayed for a night in Salisbury) to the Salisbury Cathedral. When we were there, Google Maps had outlined a 1.4 mile walk that seemed somewhat excessive, and indeed, the nice people at the hotel pointed us to the Town Path, a pleasant little walkway across the water meadows that connects to the rest of the city. Alas, even Google’s new walking directions knew nothing of the Town Path, and suggested a much longer route along city streets. Compare the red actual walking route to Google’s suggested route in the screenshot. 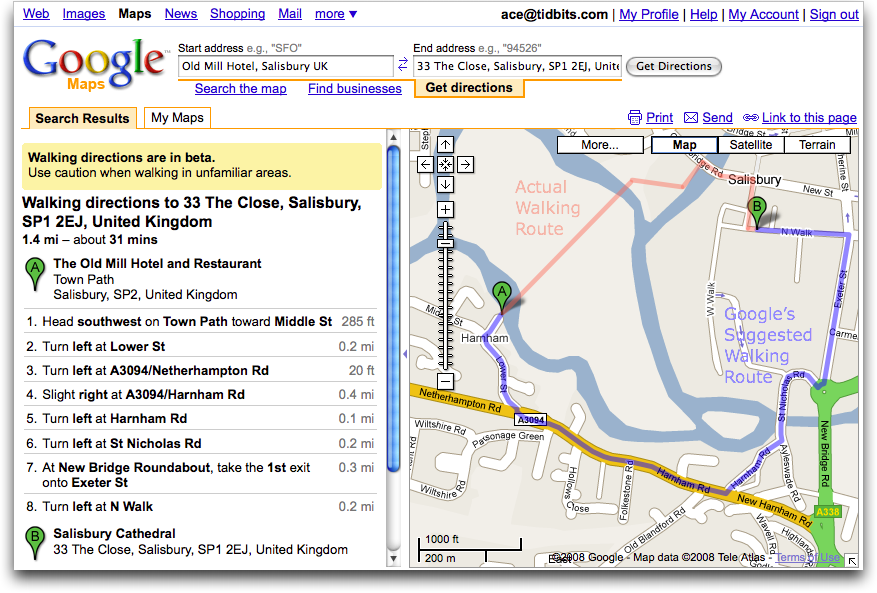 Similarly, when I asked Google Maps for directions from the hotel we stayed at in Portsmouth to the Portsmouth Historic Dockyards where we saw HMS Victory, HMS Warrior, and the Mary Rose, Google stuck to roads, ignoring Portsmouth’s Millennium Promenade, which provides a far more enjoyable stroll along the shore.

Google is aware that there are many pedestrian walkways that they don’t know about, and they’re working on ways of collecting new data about them and soliciting feedback from those with their feet on the ground about the best routes. Of course, I hope that Google acknowledges that the “best” route isn’t always the most efficient; walking along the Millennium Promenade in Portsmouth very well may not have been the fastest way to our destination, but it was well worth an extra 5 or 10 minutes for the ocean views, and to avoid car fumes, intersections, and worrying about whether our 9-year-old was paying sufficient attention to which direction the cars would be
coming whenever we crossed a road.

Just for Fun Productivity
Cookies & Privacy: We wish we were talking about chocolate-chip cookies here, but our Web site—like nearly all others—relies on a few minor digital cookies. Various laws around the world require us to tell you that fact, so consider yourself informed, if not nourished. By continuing to use this site, you agree to our use of these cookies. Cookie and Privacy Notice