Our recent trip to Wales and England involved a lot of photos, taken not just by me, but also by Tristan, who, at 9, is old enough to use a real digital camera. He takes pretty good pictures too (scroll down to the end of the article for some snaps of us in castles!), and since I didn’t want to share my Canon PowerShot SD870 IS, we bought him a somewhat less expensive PowerShot SD850 IS for the trip. Our choice of models was extremely intentional, because both cameras could share the same USB cable, SD cards, extra battery, and battery charger, reducing packing weight and complexity. Plus, Tristan is already familiar with the Canon interface, and image stabilization is a big help for him. The end result was extremely positive, since he
was able to dash around the Welsh castles non-stop, taking pictures and telling us all about what we were seeing. He ended up with nearly 1,000 photos, even after we encouraged him to cull bad ones in the camera, and I took roughly the same number during the 10 days we were traveling.

But that’s nearly 10 GB of data, and while I didn’t know in advance how many photos we would take, I was pretty sure it would be a lot. In thinking about the possible problems, I decided the most important way to protect our photos was to have at least two copies of each photo in devices that were seldom, if ever, in the same physical location.

I first considered Internet backup, but after some thought, I decided – correctly, as it turned out – that it would be too troublesome to try to find Wi-Fi every day. Even when we did have Internet access, we didn’t necessarily have enough time to upload hundreds of megabytes of photos. (Remember that upload throughput is often much less than download throughput.) If you were certain you could find high-speed Internet access regularly and would have time to fuss with it every day, uploading to Flickr or to a server you control could be a decent backup strategy.

I then thought about storing photos on an iPod, but none of our iPods have much free space on them normally, and although one could certainly have been wiped for the trip, it didn’t seem as though it would be that easy to move photos from the cameras to the iPod. Apple’s iPod Camera Connector is only $29, but it’s reportedly slow, eats batteries for lunch, doesn’t support raw format photos, and is compatible with only a few iPod models. (Belkin used to make two products that would enable you to store photos on an iPod, but neither appears to be available any more.) Besides, I was planning to bring my MacBook anyway, so I didn’t see
any particular advantage of copying photos to an iPod instead of the MacBook. If you were traveling sans laptop and with a supported iPod, it might be worth a look.

What I really wanted, but was unable to find, is a very small device that would clone one SD card to another. Since SD cards are so small and inexpensive, it would be easy to have backups of each active card and to store those backups separately from the cards still in the cameras. But if such a device is available, I couldn’t find it among all the services that mass-duplicate flash cards.

So I settled on a simple scheme that you can replicate as long as you bring a laptop on your trip. Every night, Tristan and I would cull the obviously bad or duplicate photos from our cameras, and then I’d connect each one in turn to my MacBook, downloading photos into individual iPhoto libraries. (Remember, hold down the Option key when launching iPhoto to create a new library or switch to a different one.) Since I’m using iPhoto ’08, which has selective import and can hide already imported photos, I didn’t delete the photos after importing. I’d chosen 4 GB SD cards for both our cameras, and I had another 4 GB card for mine and a secondary 2 GB card for Tristan’s. Thanks to some large movies, I filled up my card about 7 days into the
trip, whereas Tristan never filled up his card.

The end result was that by backing up the photos to iPhoto every night, we had one copy of every picture on the MacBook, which was usually locked in our car or hotel room during the day, and another on our cameras, which we had with us whenever we were out and about. Once my first 4 GB card filled up, I gave it to Tonya to carry in her purse, which she wore around her waist the entire time.

Had the MacBook been stolen from our car or hotel room, we wouldn’t have lost any photos, and had one or both of our cameras been stolen or damaged during the day, we would have lost only the photos taken that day. The whole scheme took only a few extra minutes each night, which was extremely welcome while on vacation, and as an added bonus, it was easy to send a couple of images back to our families via email every few days using iPhoto’s email capabilities.

Here are a few photos of us on the trip (Tristan took the first three; I took the fourth):

Adam and Tonya in front of the portcullis at Castell Coch 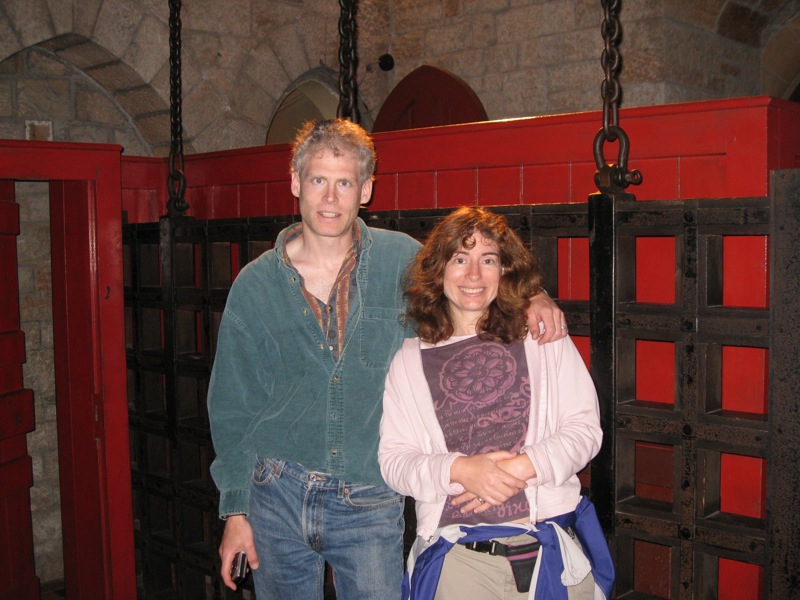 Tonya on the walls of the medieval town of Conwy 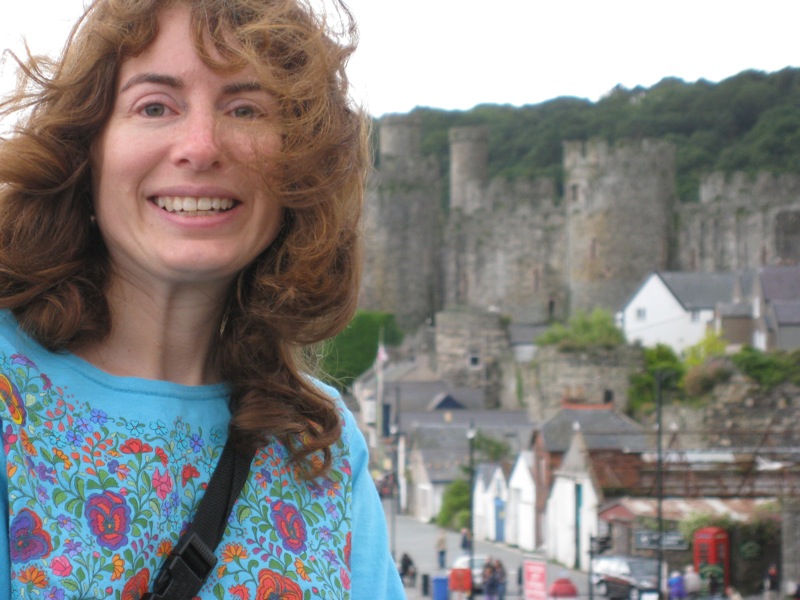 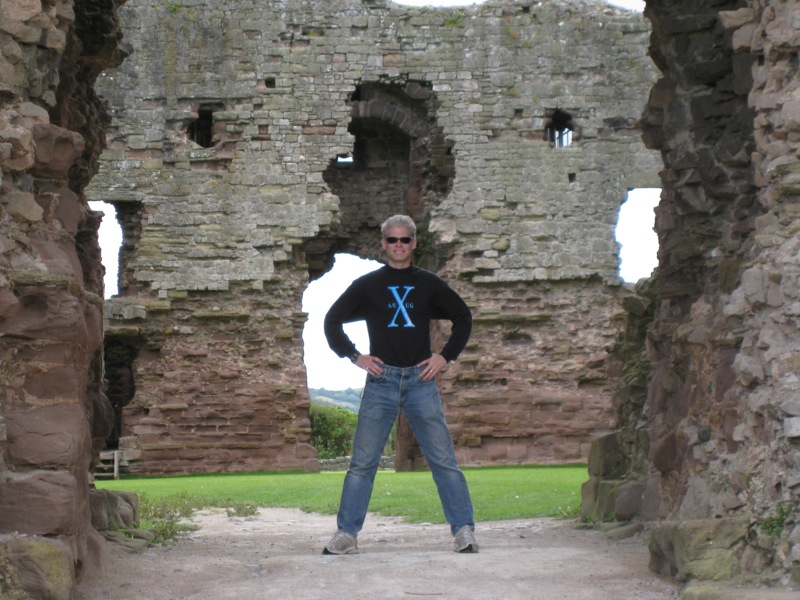 Tristan in a doorway on the walls of Conwy 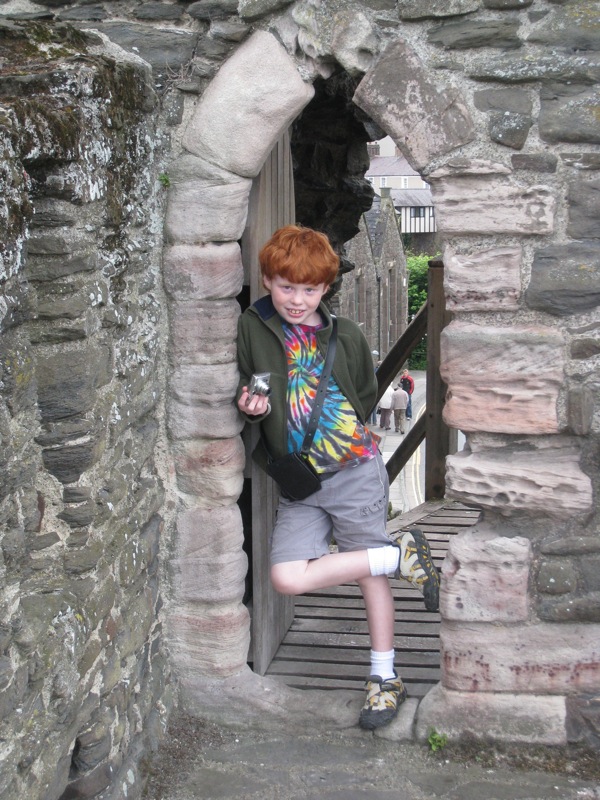 Inside TidBITS Media Creation Security
Cookies & Privacy: We wish we were talking about chocolate-chip cookies here, but our Web site—like nearly all others—relies on a few minor digital cookies. Various laws around the world require us to tell you that fact, so consider yourself informed, if not nourished. By continuing to use this site, you agree to our use of these cookies. Cookie and Privacy Notice