For a period of several hours on 11-Aug-08, both MobileMe Mail and Google’s Gmail were inaccessible for many users, although Gmail reportedly remained accessible for those retrieving email via IMAP and a standalone email client. MobileMe’s outage was not accompanied by any acknowledgment of the problem on the status blog, and after a few hours, access returned. If Apple is going to be serious about providing a status blog, they should at least put the effort into updating it promptly (see “MobileMe Status Page Promises Updates, But Tone Rings Flat,” 2008-07-26). We’ll see if Google provides any more explanation than Apple when the dust settles. 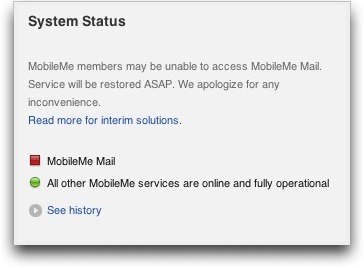 Other MobileMe and Google services were unaffected, as far as I’ve seen, but it’s distressing that MobileMe continues to suffer outages even after Apple claimed to have fixed the initial problems after the .Mac-to-MobileMe transition. Steve Jobs dissected the MobileMe launch in an internal email message, coming to essentially the same conclusions as Glenn Fleishman did in “Apple Claims MobileMe Mail Fully Restored” (2008-07-30).

I haven’t tracked Gmail outages separately, but for the most part, I haven’t heard complaints about frequent problems. Although there are no guarantees with any email service (heck, my server has been inaccessible for my few local users every so often too), people relying on email for mission-critical services would do well to maintain alternate accounts in case of trouble.