Wouldn’t it be nice if every picture you took was automatically uploaded to your Mac – and to your Flickr account – without your having to do anything? That’s the premise behind the Wi-Fi-enabled 2 GB Eye-Fi Share SD card, and it was sufficiently compelling that I plunked down my money (it’s $99.99 at Amazon; I’ve seen no discounts) for the opportunity to use it with my Canon PowerShot SD870 IS. Unfortunately, despite incredibly slick packaging and a generally well-considered interface, the Eye-Fi card made my standard workflow for importing photos into iPhoto slower and more confusing, to the point where I lost data
several times, stopped using its wireless capabilities, and eventually moved to a larger, faster card.

The Eye-Fi Share is a new name for Eye-Fi’s original card, which is actually what I have (and yes, I’ve updated its firmware and software so it’s completely current). The company now also makes two other versions, the Eye-Fi Home ($79.99 at Amazon) that can upload only to your computer and the Eye-Fi Explore ($129.99 at Amazon), which can geotag photos and includes 1 year of access to Wayport hotspots (subsequent years cost $19). Glenn Fleishman recently reviewed the Eye-Fi Explore for his Wi-Fi Networking News site; his opinion differs fairly significantly from mine. He also wrote a summary for TidBITS along with some rebuttals to my points below in “Why I Like the Eye-Fi Explore Wireless SD Card,” 2008-08-18.

Basic Setup and Usage — The Eye-Fi card is a normal-looking 2 GB SD card, but, through a feat of engineering magic, it also sports a Wi-Fi radio and an extremely tiny computer that enables it to communicate with wireless access points. Don’t assume that it will promiscuously connect with just any open access point, though, stories about thieves being foiled by Eye-Fi uploads notwithstanding. You must set up your Eye-Fi card to connect to specific open wireless networks by name; the fact that I’ve configured mine to connect to my “TidBITS” network means that it can’t, without further
configuration, connect to any other wireless network unless it, too, is called “TidBITS”. If the network in question has a password, the Eye-Fi won’t connect to same-named networks that are open, either.

(The Eye-Fi Explore has a different and worse setting: if you use the Wayport hotspots, which are intentionally available to you, you must also allow the Explore model to connect to any open hotspot it finds. This is a bad move, and may violate laws in certain cities, states, and countries.)

Configuration of new networks requires that the Eye-Fi card be connected to your computer via USB; it comes with a little USB card reader for this purpose, which means you won’t be able to connect to just any Wi-Fi network while you’re out and about unless you also have a computer handy. WPA Personal and WPA2 Personal are both supported, as is WEP, though not the form of WEP used by Apple’s AirPort base stations – but WEP is worthless anyway. The Eye-Fi Share card can’t connect to any public hotspot that requires a Web-based login for obvious reasons, and even the Eye-Fi Explore shares this limitation.

A tiny bit of software on your Mac provides a menu bar item and handles some aspects of communication with the Eye-Fi card; it also provides a menu item for accessing Eye-Fi Manager, an application that runs as a Web server on your computer, and which you control via a Web browser. Eye-Fi Manager lets you configure wireless network profiles, choose which (if any) online file sharing services to upload to, choose whether or not to upload to iPhoto or a normal folder on your Mac, and turn on email or SMS text message notifications of when it starts and finishes uploading. 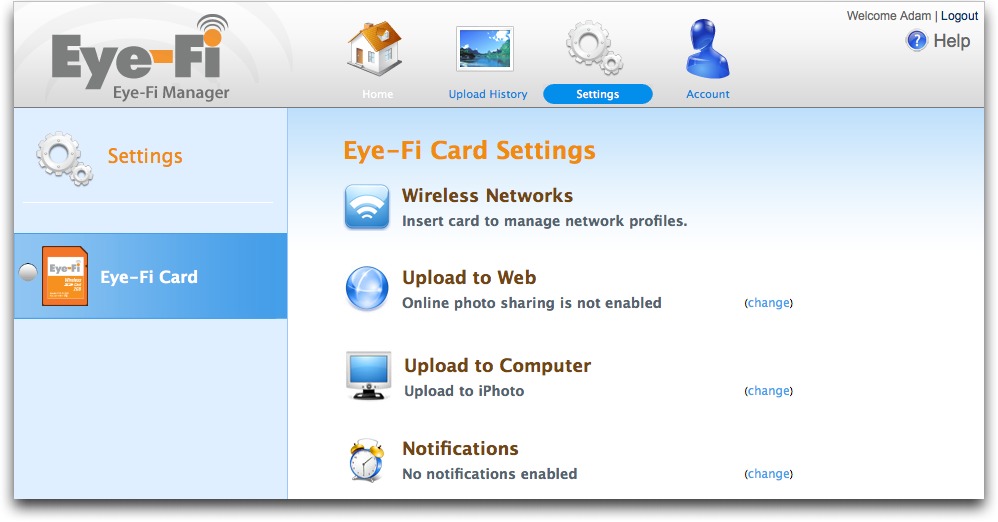 Once the card is configured, you can use your camera just as you always do, but as soon as the Eye-Fi senses that it is within range of a recognized wireless network, it starts uploading photos. The Eye-Fi software on the Mac displays thumbnails of the photos as they’re being received, and it automatically imports photos into iPhoto or into your specified folder in the Finder. 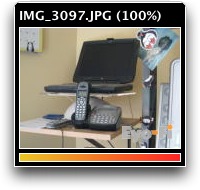 After the photos arrive on the Mac, they’re then uploaded to your favorite photo sharing service, as long as it’s not MobileMe. (Eye-Fi has cut deals with each photo-sharing, print-making, and social-networking service for uploads, and Apple doesn’t have any outside deals with anyone.)

Sounds good, doesn’t it? Yes, but…

Nice Idea, Annoying Reality — Don’t take the criticisms that follow the wrong way. The Eye-Fi card is a miracle of engineering, and its creators have done incredible work in creating a piece of hardware that can work with any SD-capable camera.

That said, no piece of hardware or software has irritated me more than the Eye-Fi in recent memory. Some updates have improved it; for instance, when I first got it, it couldn’t send photos directly to iPhoto, which required another manual step or error-prone automation.

The problems I’ve run into fall into two categories: limitations of the Eye-Fi software that could theoretically be fixed and basic conceptual conflicts with how I – and many other people – work with cameras and photos. Many of these latter problems could be addressed if the Eye-Fi could communicate bidirectionally with cameras. Only a single camera – a high-end model from Nikon – has been released since the Eye-Fi’s introduction in late 2007 that allows communication between the camera’s computer and the onboard process on the Eye-Fi.

Camera makers have produced a series of consumer models with Wi-Fi built in that typically have far more severe limitations than the Eye-Fi, but there’s no indication whether those manufacturers are interested in working more closely with Eye-Fi, pursuing their existing poor strategies, or improving their current Wi-Fi integration. (Glenn Fleishman wrote a detailed screed on this topic for a PC World blog.)

Practical Limitations — As is so often the case, the devil is in the details, and for me, the Eye-Fi card fell down on the details.

Conceptual Problems — Although Eye-Fi can and should address the above implementation details, the more serious problems relate to the Eye-Fi card’s inability to communicate with its host camera and to be configured other than through a full-fledged Web browser running on a computer, and its all-or-nothing approach with photo sharing sites.

So What’s the Point? It’s clear that I’m not the target audience for the Eye-Fi card, and in fact, I’ve given up using it entirely in favor of a Transcend 4 GB SD card that’s faster (helpful for recording longer movies; the Eye-Fi couldn’t keep up after 1 to 4 minutes) and costs less than $15 at Amazon. Eye-Fi won’t say how fast the Eye-Fi cards are, but they seem to be on the slow side. Ironically, I quite
like the little USB memory card reader that came with the Eye-Fi, and it works fine with the new Transcend card. (Eye-Fi chose to not offer cards larger than 2 GB capacity to avoid compatibility problems with older cameras that can’t read the high-density SD format required for 4 GB and above.)

So who is the Eye-Fi aimed at? Surely not professional photographers, or even serious amateurs, since it doesn’t support raw images. That leaves casual photographers, but I count myself among that group, and the Eye-Fi did nothing but annoy me due to its awful integration with iPhoto, inability to handle movies, complete inability to communicate with a camera, and all-or-nothing approach to photo sharing sites.

Hmm. That narrows it down. The Eye-Fi card could be great if you:

For me, it turns out that it’s faster and easier to connect my camera via its USB cable or use a USB memory card reader to import into iPhoto, cull and edit photos there, and then upload select photos to MobileMe or Flickr. If you’re like me, you can get a larger, faster SD card for a fraction of the price of the Eye-Fi Share. Or, if all of the bullet points just above are true of you, the Eye-Fi Share could be just perfect.

Media Creation Networking Opinion
Cookies & Privacy: We wish we were talking about chocolate-chip cookies here, but our Web site—like nearly all others—relies on a few minor digital cookies. Various laws around the world require us to tell you that fact, so consider yourself informed, if not nourished. By continuing to use this site, you agree to our use of these cookies. Cookie and Privacy Notice