I fit into a category of photographer for whom the Eye-Fi Explore wireless SD card is a neat fit ($129.99 at Amazon). Adam Engst, our fearless publisher, has a different model – the Eye-Fi Share – that he excoriates in “Why I Hate the Eye-Fi Share Wireless SD Card,” 2008-08-15. Oddly, I agree with most of Adam’s points, but I have found over the last several weeks that the Eye-Fi Explore works quite well for me. (I wrote a longer, more technical review at Wi-Fi Networking News; you might enjoy this summary and
quasi-rebuttal of Adam’s thesis if you like it short and sweet.)

Explore’s Extras — The Eye-Fi Explore adds geotagging and hotspot uploads on top of features in the Share model. Its geotagging support inserts an approximate latitude and longitude into the metadata of pictures based on the Wi-Fi environment around you when the picture is snapped. Eye-Fi uses Skyhook Wireless’s Wi-Fi positioning data, the same as is used for one component of the iPhone’s location services, which means that it works best in cities and suburbs in industrialized countries. If you’re taking photos out in the country, on the beach, or in small towns, you’re unlikely to pick up a recognized Wi-Fi signal and thus a match. (You can check Skyhook Wireless’s coverage online; the map shown below gives you a sense of how much of the United States they’ve mapped.) 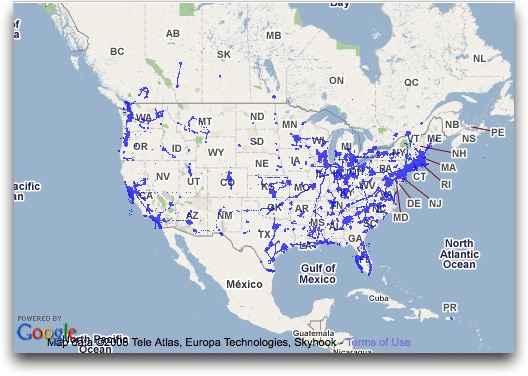 I love the geotagging because it involves no effort, and puts two more dimensions onto photos, making it far easier to find and organize pictures. I’m hoping Eye-Fi figures out how to build a GPS radio into future models, or how to use an external GPS that pairs with their card.

The hotspot feature is a bit more problematic. A one-year subscription to upload at any of about 10,000 Wayport-run Wi-Fi hotspots is included in the purchase; subsequent years cost $19. Wayport powers about 9,500 McDonald’s restaurants and a scattering of several hundred hotels in the United States. This is fairly thin coverage if you don’t frequent fast-food franchises, but dropping in for some food-like substance and an upload isn’t horribly inconvenient, given McDonald’s ubiquity.

(Oddly, even though we perceive McDonald’s is everywhere, they’re spread rather thin in Seattle, with the nearest one to my house about a 10- to 15-minute drive away; Adam’s in the same boat. McDonald’s may make more sense as an upload location when you’re traveling, where you would make a specific pit stop to upload pictures. Wayport has a map of their McDonald’s and other locations.) 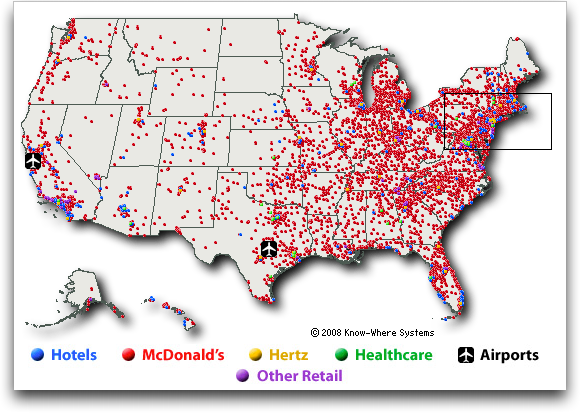 The Explore has a problematic setting: if you use the Wayport uploads, the card also demands to upload to any open, login-free hotspot of any kind. I don’t like that, as that behavior can get you into trouble; it should be a case-by-case and intentional choice on the user’s part.

Adam’s Aggravations — Adam and I have a lot in common, but our attitudes and behavior around digital photography diverge mightily.

Neat, But Niche — The Eye-Fi Explore has fit right into my consumer workflow for taking pictures. This last weekend, my wife and I threw a birthday party for my older son, Ben, who turns four today. I took pictures like crazy over a couple hours, and because we had the party at the house, most of those photos were already on my computer and up at Flickr by the time the party was over. We didn’t have to swap batteries – my camera uses two AA rechargeables – and we never had to think about uploading. Now, we still have to edit and cull, and we can do that locally on our media computer (for making prints, typically) or on Flickr (for sharing with family, friends, and the world).

Future Eye-Fi models should factor in more of what Adam suggests, however, as the Eye-Fi remains a niche product, even if that niche is large, because it requires many shutterbugs change their behavior to match the card instead of having it meet their current needs.

Media Creation Networking Opinion
Cookies & Privacy: We wish we were talking about chocolate-chip cookies here, but our Web site—like nearly all others—relies on a few minor digital cookies. Various laws around the world require us to tell you that fact, so consider yourself informed, if not nourished. By continuing to use this site, you agree to our use of these cookies. Cookie and Privacy Notice