In my ongoing efforts to keep up with the latest Mac backup tools, I’ve come across a number of services that promise to automatically synchronize some set of files from your Mac or PC with a server somewhere on the Internet, such that you can access those files from nearly any device that can run a Web browser. Among the many services in this category are SpiderOak, Dropbox, and of course MobileMe‘s iDisk feature.

On the whole I’ve found these services interesting but not exciting – there’s always at least one “gotcha,” such as a missing key feature, significant bugs, an unreliable infrastructure, or so-so Mac software. (MobileMe, alas, has thus far been an offender in all the above categories.) However, one such service I’ve had my eye on for a while, SugarSync from Sharpcast, suddenly got much more interesting with the release of an iPhone client and a new online feature.

Introducing SugarSync — First, the basics. You pay for the SugarSync service based on the amount of online storage space you want – rates start at $24.99 per year for 10 GB and go up to $249.99 per year for a healthy 250 GB. Once you’ve signed up (a free trial is available), you download the free client software, which is available for Mac OS X and Windows; they also offer mobile versions for Blackberry, Windows Mobile, and now iPhone.

The client software runs in the background and automatically synchronizes any folders you specify (such as your Desktop folder or Documents folder, space permitting) with the SugarSync servers. Assuming an active Internet connection, synchronization happens immediately when files in the designated folders change on any device – that makes it a genuine “push” application. You can see and download your synchronized files by logging in to the SugarSync Web site, and if you set up the software on more than one computer, you can use it to sync files between them. All files are encrypted and transferred using SSL connections.

So far, that may sound like a more-flexible, higher-security, cross-platform version of iDisk. But wait, there’s more!

Doing iDisk One Better — If you’ve paid close attention to the MobileMe news, you may know that the service is missing a feature that was demonstrated publicly and was even shown in Apple’s introductory video about MobileMe (though the video was later changed to remove any mention of this feature). What we were supposed to have seen was a button on the iDisk page of the MobileMe Web site that let you email someone a link to any file. So, instead of emailing a large attachment, you’d just put a file on your iDisk, click a button, and send someone a special, private URL at which they could download the file. That sounded great to me, but for whatever reason, that feature isn’t part of MobileMe – at least not
yet.

Well, with SugarSync you can do exactly this. For example, the other day I needed to send out copies of a number of my Take Control ebooks to a user group at which I’m going to be giving a presentation next week. The combined size would have exceeded what my mail server permits, and the files could easily have been rejected on the receiving end too. So I stuck them in one of my SugarSync folders, selected them in the SugarSync Manager window, clicked the Send Files button, typed in an email address, and that was that.

SugarSync on iPhone — All that is useful, but it gets even better with the iPhone app. With a couple of taps, you can see a list of the files in the designated sync folders on your Mac or PC, and if they’re in a format the iPhone understands (such as Microsoft Office, PDF, plain text, or most graphics formats) you can view the file on your iPhone. Not only that, but you can email someone a link to any of these files right from your phone – and here’s the cool part – even if the file isn’t actually on your phone. 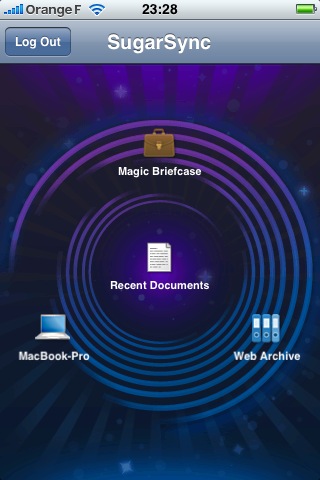 So picture this. You’ve set up your Downloads folder to sync with SugarSync. On your way out the door to work, you click on a link to download a 300 MB file, knowing that it will take some time to show up on your computer. Then, while riding the train or walking down the street, you pull out your iPhone, tap a few buttons, and email a link to that file to a friend, who can download it immediately, without the file ever having to sync to your phone at all – no worries about bandwidth limits, slow uploads, or anything else. (Oh, and by the way, when you get to work, the file will also be waiting for you on your PC!)

The technology behind this is all very straightforward, but SugarSync’s excellent implementation is what makes it feel magical. I’m so used to syncing meaning literally copying entire things from one place to another (and it usually is exactly that), but the SugarSync iPhone app lets you do a sort of lightweight, virtual syncing that turns out to be much more practical in many situations.

Here’s another example. You have, say, 10 GB of files on your Mac synced with SugarSync, but far less than 10 GB of free space on your iPhone. And if you did have the space, you wouldn’t want to wait for all that stuff to transfer – even with a USB connection, it would take a very long time. Yet, curiously, when you look at your sync folder on your iPhone, all the files appear to be there, with changes appearing almost instantly even over a cellular connection. And, sure enough, if you try to view one of the files on your iPhone, there it is!

Well, I fib slightly. What I described can happen, and often does, with smaller files and a Wi-Fi connection. But in fact what SugarSync offers iPhone users is essentially on-demand sync. It shows you all your files, and as soon as you ask for one, it fetches it from the server, which in some cases can be so fast it appears that the file was already on your phone. SugarSync also deletes the file when it’s no longer needed, so you can get approximately the effect of having many gigabytes of files available on your iPhone at any time without (most of) them actually being there.

I’d like to mention two other interesting features of the SugarSync iPhone app. One, a seemingly small but very handy thing, is renaming: you can rename a synchronized file on your computer (and the SugarSync server) from your iPhone. I’ll give you an example of how I put this feature to use. The iPhone can display text files, but only if it knows they’re text files, which it determines by looking at the extension. I had some documents on my Desktop that I created in BBEdit and didn’t bother giving an extension, and I wanted to read them on my iPhone. No problem: I just added a “.txt” extension, and a View File button instantly appeared in SugarSync, letting me see their contents.

The other interesting feature, which doesn’t appear in the desktop or Web versions of SugarSync, is a list of Recent Documents – which is to say, shortcuts to the most recently edited files in any of your designated sync folders. Unfortunately, files don’t disappear from this list when they’re deleted, and I had dozens of copies of some “recent” (but long since deleted) files on my iPhone. I eventually figured out how to clear them from the list, but it was an odd, awkward procedure: I had to log in to the SugarSync Web site, locate the previously trashed files in my Deleted Files folder, select them all, and click Permanently Delete. They did immediately disappear from my iPhone, but I think the Recent Documents feature should exclude
deleted files.

Versioning, Almost — Although I’m most excited about the SugarSync iPhone app, I also want to mention an important new feature that applies across the SugarSync line: versioning. Previously, SugarSync kept copies of synchronized files that you’d deleted, but now, in addition, it keeps up to five older versions of every file. This is very good, because it officially promotes SugarSync from “just a sync program” to “an honest-to-goodness backup program” in my book – it now creates what I refer to as additive incremental archives.

However, my enthusiasm for this new feature is tempered by the fact that it stores only the last five versions; because SugarSync syncs so efficiently, those five versions of an important file you’re working on could easily turn out to be all from the last 10 minutes! If you could store more versions, or if you could restrict SugarSync to keeping a maximum of one older version per hour (or even per day), I think that would provide more realistic and practical protection. As it is, it can’t do the one thing I want to be able to do with backups of files I’m actively working on, which is to restore an arbitrary version from hours or days ago, even if the file has been saved dozens or hundreds of times in between. So, it’s no Time
Machine, but at least it’s a step in the right direction.

Final Thoughts — I recently read a rumor to the effect that Apple is planning an iDisk feature for the iPhone and iPod touch in the next month or two. Obviously, I have no idea if the rumor is true, or what such a feature would look like if it did exist. But I will say that if Apple wants to outdo SugarSync in cleverness and convenience, they’ve got their work cut out for them.

Meanwhile, even if you don’t have an iPhone or iPod touch, SugarSync is well worth trying out. Sharpcast offers a 45-day free trial of the service with a 10 GB limit, which should be more than adequate to get a feel for what it can do. SugarSync 1.1.10 for Mac is a 19.9 MB download.

iPhone, iPad, & iOS Networking Security
Cookies & Privacy: We wish we were talking about chocolate-chip cookies here, but our Web site—like nearly all others—relies on a few minor digital cookies. Various laws around the world require us to tell you that fact, so consider yourself informed, if not nourished. By continuing to use this site, you agree to our use of these cookies. Cookie and Privacy Notice