Understanding technical concepts, even for those who spend their days with their “heads inside the computer,” as I conceive of it, can often be a reach. People learn in different ways, and hearing an explanation, seeing a visual representation, and reading about something all reach different individuals.

Google decided to hire the talented Scott McCloud to explain in graphics using the company’s words how their new Chrome Web browser differs from all those currently available. It’s a neat idea: in explaining their JavaScript optimization, for instance, you don’t need to understand what a classless programming language is if you look at the graphical representation, which is simplified, but entirely accurate. 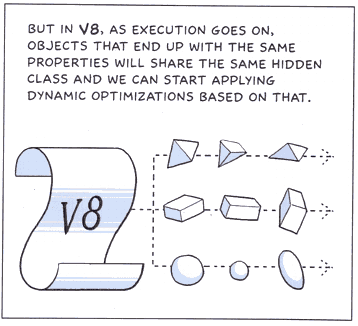 The comic was released under a Creative Commons license, and accidentaly sent ahead of schedule through postal mail to an unknown number of people. Philipp Lenssen of Google Blogoscoped explains that he received, scanned, and posted the comic; Google later posted the full comic at the company’s book site.

The site referenced in the comic, www.google.com/chrome, isn’t live at this writing, but a Google blog post says that a beta for Windows will be released on September 2nd, and that Mac OS X and Linux versions will follow further on in the development and beta testing process.

Chrome has a key difference from previous browsers: each tab runs as a separate process to isolate JavaScript slowdowns, security exploits, and browser crashes to that tab. This is much the same compartmentalization that multi-tasking operating systems use to prevent one crashing program from bringing down the entire system.

For pages that feature pop-up windows, whether useful or advertising come-ons, each tab will capture the pop-ups and enable you to convert them into freestanding windows.

Security is enhanced, Google says, by disallowing each tab from writing files or examining data on the hard drive. This is a typical behavior, and something that Apple and Microsoft have implemented in some form in Safari 3 and Internet Explorer 8. Google has also implemented a three-tier hierarchy of trust that it believes will prevent unintentional privileges being granted to programs or scripts on Web pages that shouldn’t have them.

The browser will also let you shroud a given tab in secrecy – an “incognito” window – so you can exclude its pages, passwords, and other details from the browser’s cached or saved elements. People typically use this mode to avoid leaving traces on a shared computer – often for personal research, viewing unclothed individuals, or keeping a gift or party secret.

Chrome will be based on WebKit, the same open-source project used as the fundamental basis of Apple’s desktop and mobile Safari and Nokia’s S60 browser, which Nokia will ultimately use to replace all its current browsers and which is part of the future direction of the Symbian platform.

Scott McCloud is best known for his “Understanding Comics” and “Reinventing Comics,” in which he uses the medium to explain its past, present, and potential future, a future in which McCloud has been deeply involved.

This is the best kind of browser war: unlike the monopoly-driven efforts by a certain firm to kill Netscape Navigator in the 1990s, we’re in a time of browser plenty. Microsoft recently released a second beta of Internet Explorer 8 for Windows; Firefox 3 for all platforms appeared not long ago from the Mozilla Foundation, the spiritual heirs of Navigator; and Apple keeps pushing WebKit and Safari to have greater speed and more security for Windows, Mac OS X, and the iPhone and iPod touch. And that’s not even considering other entrants such as OmniWeb, Opera, iCab, Camino, and Flock.

The nice part for users is that with Google’s entry, we’ll have four browsers, all of which are intended to be fast, easy, and secure, and which use three separate rendering platforms (Chrome and Safari sharing WebKit). This ensures the kind of diversity of evolution that promotes better software and a lower chance of a single flaw being exploited in all extant browsers. It also means job security for Web developers used to tweaking designs to look good in multiple browsers.