Typically, audio recording software requires you to choose your audio input device – generally a microphone, either built-in or attached to your computer. WireTap Anywhere lets you define your own virtual input devices, which are made up of any and all sources you care to add to them. For example, you could specify iTunes, Skype, and your microphone together as a single device, enabling you to record the live combination of your voice, the voice of a remote person over Skype, and background music in GarageBand.

You can do this already using Ambrosia’s own WireTap Studio or Rogue Amoeba’s Audio Hijack Pro. What’s new and different here is that you aren’t limited to grabbing audio from specific sources for recording purposes. You can also route audio to any program that can accept it. So, for example, you could have a conversation in iChat where you’re speaking into a microphone and playing something you created in GarageBand. Better yet, do you have friends or family members who use different audio chat software? You can use WireTap Anywhere to link iChat and Skype together and initiate a conference call between yourself and people using Skype and iChat at the same time.

Creating these virtual input devices is deceptively simple. WireTap Anywhere appears as a System Preferences pane that lists any and all devices you have created. When you create a new WireTap Anywhere device, select an audio source, which can be any physical device built-in or attached to your computer, or any application currently running. These are added to the virtual device and mixed together. 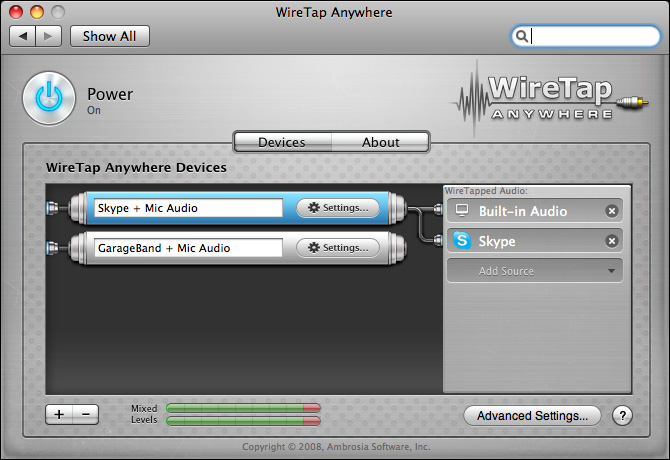 When recording an interview in Skype or iChat, your voice, recorded locally through your microphone, needs different post-processing from your remote subject’s voice, which comes in at a lower quality. Thankfully, WireTap Anywhere allows you to send each individual audio source to a separate channel, instead of the default behavior of mixing all sources to stereo.

Record your interview in a program that supports multi-channel recording (such as GarageBand) and have each voice (yours and theirs) land in separate tracks. Then you can apply one set of audio effects to your voice and a different set to your subject’s until both are at the right volume levels and sound quality. 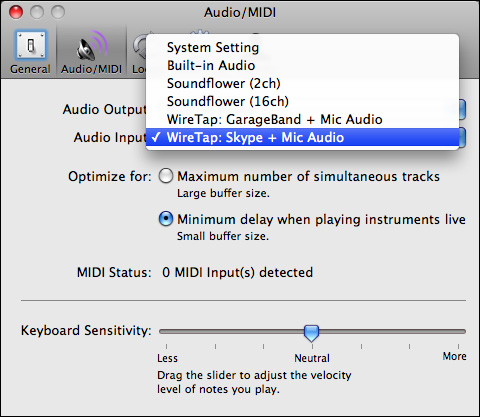 This method of recording requires four channels, two for you (left and right) and two for your remote party (left and right). Unfortunately for me, I do my interviews on an aging 1.25 GHz PowerBook G4, which is not quite up to the task of recording four channels simultaneously – my audio was choppy and not acceptable. Until I get a faster Mac, I’m sticking with Audio Hijack Pro, which only records two channels (local on the left and remote party on the right), for my multi-channel Skype interview recording needs.

A number of advanced features will appeal to users of Logic or other high-end audio software, such as having WireTap Anywhere operate as an Audio Unit Generator. In this mode, you bring your tapped audio in not as an input device but through an Audio Unit Generator. Audio Units are Apple’s standard for audio processing filters. They can either modify existing sound (the most common usage) or generate sounds. In the latter mode they act as instruments or noise generators. While many audio programs support Audio Unit effects for modifying sound, only high-end tools such as Logic support sound generators. The main advantage of acting as a generator is that the user interface is accessible and changeable from within your audio program.

I wish GarageBand would support this feature, since I found that after I changed the settings of my virtual input device for the third or fourth time, GarageBand would crash and require a reboot of my computer before it would even see the virtual devices. Being able to alter my settings inside of GarageBand would have made this much easier. That said, once the devices are set up the way you want them, there is little need to change them.

While other applications (WireTap Studio, Audio Hijack Pro, and Soundflower come to mind) provide some of these features, WireTap Anywhere provides all of them and more in a clean, intuitive interface that makes the creation of new input devices quick and deceptively easy. WireTap Anywhere costs $129 and there’s a 30-day, fully functional demo available as a 13.1 MB download.

I discuss the functionality of WireTap Anywhere and some of my experiences using it in episode 8 of Take Control of Podcasting on the Mac: The Podcast.

[Andy Affleck is the author of the just-updated “Take Control of Podcasting on the Mac” and has been tinkering with audio tools since the days of Farallon’s MacRecorder on his Mac Plus.]