Google has announced its first cell phone. Excuse me, did I say Google? I meant T-Mobile USA. It’s an easy mistake to make. The T-Mobile G1 synchronizes only with Google’s online Web services, has the Google logo on the back, and, duh, has a “G” as part of its name.

Last year, Google assured consumers and the cell phone industry that their Android platform wouldn’t result in a GPhone. Rather, nearly three dozen companies in the Open Handset Alliance – including software developers, cell phone carriers, and handset makers, among others – would collaborate in bringing a range of hardware, software, and services to the market.

This is still true, but the first phone is, in essence, the much-predicted GPhone. (See the now somewhat inaccurately titled, “Google’s View of Our Cell Phone Future Is an Android, Not a GPhone,” 2007-11-12.) 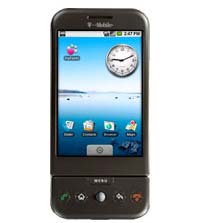 While the phone was made by HTC, Google runs the show and T-Mobile operates the lights and moves the scenery. The G1 has a touch screen, and includes 3G, Wi-Fi, Bluetooth, and GPS radios. In its closed position, the touchscreen interface rules the roost, but the screen can slide aside to reveal a physical keyboard for typing.

The phone includes a 1 GB RAM card in a card slot and can accept up to 8 GB in that slot. The G1 also has a removable battery. (The iPhone comes in 8 GB and 16 GB models, with a 32 GB model rumored to be on the way; the iPhone’s battery isn’t user-swappable.)

Despite including 3G service for the phone, T-Mobile has only a handful of cities equipped for those higher data speeds, although that list includes New York City, the San Francisco Bay Area, and Los Angeles. In the large majority of the United States, T-Mobile offers only 2.5G EDGE service. The company says it should cover 27 metropolitan areas by the end of 2008, as opposed to AT&T, which expects to be in 350 markets by then; Verizon and Sprint have long covered an even larger number of areas with 3G service.

So far, synchronization and push email – where email is continually sent to a phone when received at a server – is limited to Google’s Web applications; there’s no Microsoft Exchange support. The G1 can handle non-Google email accounts for normal pull or polling retrieval.

On the music front, the G1 has gotten good early reviews through an integrated Amazon MP3 store, which features the retailer’s catalog of 6 million unprotected songs. The store’s interface is apparently well designed and easy to use.

Part of the potential for Android is that its technology is relatively open – some parts are open source already – and committed carriers have to agree to allow any services or software to work on the handsets they sell, and to allow any legitimate handset.

That means anything missing in an initial release could be supplemented by application developers and service hosts – unlike with Apple, which highly restricts which programs can run on the iPhone. Apple could choose to offer the iTunes Store’s unprotected music through an Android application, so far as I can tell, as unlikely as that is.

Android’s online application store is called Market. At launch, all applications offered must be free, although that will change, and there’s no approval process for inclusion. Carriers will work out revenue splits with developers when a for-fee version of Market starts up, according to MocoNews.

Walt Mossberg of The Wall Street Journal got an advance look, and generally praises the G1 as a serious competitor to the iPhone, even though it’s less sleek (both heavier and larger) and less polished.

The G1 can copy and paste. Perhaps that gives it a leg up. More seriously, the developers built in nifty integration, so the G1 can determine your compass point from its GPS and orient maps in the included Google Maps software to the direction you’re facing. That’s neat, and there’s no reason that the iPhone 3G couldn’t have done that (nor do that in the future). The map program also shows photographic street-level views.

Oddly, as Mossberg notes, there’s no built-in video player, although one can be downloaded, and the phone uses a non-standard audio jack – HTC’s ExtUSB format, which requires a not-included adapter that plugs into the USB port, and is rather awkward. It also lacks support for the rather straightforward stereo audio Bluetooth profile; the iPhone has the same bizarre lacuna. The G1 has a 3 megapixel camera, but can’t record video out of the box.

The T-Mobile G1 will go on sale in the United States on 22-Oct-08 for $180 with a two-year voice contract, requiring at least a minimum voice plan (they start at $40 per month), and a data plan that includes unlimited data at either $25 for 400 text messages or $35 with unlimited text messages. T-Mobile will next offer it in Britain starting in November 2008.