For years I’ve been a big fan of Indev’s Mail Act-On, a plug-in for Apple Mail that lets you assign keystrokes to individual rules for things like filing messages and changing their background color. That may not sound very exciting, but in practice, it has revolutionized the way I work with Mail. And it’s one of those things that gets into your motor memory and becomes so automatic that you almost can’t figure out how to function without it. (Enthusiasts of LaunchBar, Quicksilver, or Butler, you know what I mean.) But now, my fingers are 32 percent happier, because Mail Act-On 2.0.1 has been released. Whereas the first version knocked my socks off, this new version also launders my
socks, folds them, tucks them neatly into my sock drawer, and gives me a pedicure.

I have no idea what that last sentence means either, but I’m trying to make the point that I’m extremely happy with this new piece of software!

The Keys to Efficiency — Let me begin with some Mail Act-On basics – things the program has been able to do for some time. Its fundamental capability is ad hoc application of individual rules. Normally, whatever rules you set up in Mail apply automatically to all incoming messages – and only then. You can select a message later on and manually apply all your existing rules, but Mail doesn’t let you apply just one rule to a message. Mail Act-On does, and it lets you apply rules with keystrokes (a big bonus in my book).

Say you have dozens or hundreds of mailboxes, nested several levels deep. You’ve just read a message in your Inbox and you want to file it in one of these mailboxes. Mail lets you do this by drag and drop, but if you have to navigate a complicated hierarchy of mailboxes, that’s both awkward and error-prone. You can also dig through a set of hierarchical menus to do the same thing – it’s a bit less tweaky but still time-consuming. With Mail Act-On installed, you can set up a rule that says “Move messages into mailbox X,” and with as few as two keystrokes, apply that action instantly to any message(s) you select.

Now, that by itself isn’t terribly interesting, because there are lots of other ways to assign keystrokes to menu commands. But Mail Act-On lets you go way beyond that, because all its actions are based on rules. That means you can do a whole bunch of things with a single keystroke (for example, mark a message as read, change its color, send an automatic reply, and file it into a mailbox). In addition, you can specify conditions and not just results. So, a rule can say, “Move messages into mailbox X only if the sender is so-and so.”

Not only that, but if you assign the same keystroke to multiple Mail Act-On rules, you can apply all of them at once. For instance, I have a rule that files messages from my wife in the “Morgen” mailbox, another that files messages from my mother in the “Mom” mailbox, and similar rules for a bunch of other people with whom I correspond frequently. I assigned the keystroke “D” to all these rules (my mnemonic is “D” for “Do the right thing,” in case you were wondering), and now whenever I want to file messages from any or all of those people, I can do it with just one keyboard shortcut.

New and Improved — All right, that’s all old news. It’s been nearly a year since I installed the initial (and only) public beta of a Leopard-compatible version of Mail Act-On. That version got the job done, but I experienced some performance difficulties, and had long wished for some interface improvements. When Mail Act-On 2.0 finally appeared last week, I wasn’t expecting much more than a polished, bug-reduced version of what I had been using. Instead, what I got was a totally new Mail Act-On, rewritten from scratch with better performance, a dramatically improved interface, and features I hadn’t even dared to hope for.

In my opinion, the most interesting new feature is one that many Mail users have wanted for years: outbox rules. Now, for the first time ever, you can have special rules apply automatically to all your outgoing messages. This lets you do things like move sent messages into subject- or correspondent-specific mailboxes, grouping conversations together in one place instead of having one ginormous Sent mailbox (mine has, at the moment, a completely unreasonable 25,000 messages) that’s detached from all your carefully filed incoming mail. Lots of other email programs have offered this capability for years, and I’m delighted to finally be able to add it to Mail.

The interface for creating Mail Act-On rules has progressed from weird and somewhat aggravating to clean and obvious. Previously, to assign keystrokes to rules, you had to give them special, odd names, and put them in a certain position in your list. Now, when you go to Mail’s Rules preference pane, you see three views: Inbox Rules (Mail’s existing rules), Outbox Rules, and Keystroke Rules. When you create a rule in the Keystroke Rules view (Mail Act-On migrates rules from the old version automatically), you simply create a rule as you normally would, but with one tiny addition: a single character that serves as the keystroke. (Yes, just one character – I’m getting to that.)

Earlier versions of Mail Act-On had an odd way of using keystrokes, which took some getting used to. The normal method was to press a user-assignable shortcut key (by default) followed by - not at the same time as - a single character. Alternatively, you could press Control and your shortcut key at the same time, so my "Do the right thing" shortcut was either followed by D, or Control-D, the latter of which I found more convenient and less error-prone. The new interface for performing keystrokes is still unusual, but more intuitive and much more powerful.

You still have the option to press either a shortcut key followed by a keystroke or Control at the same time as a keystroke. The default shortcut key (which is still user-adjustable) has changed to F2; when you press it, a menu appears, showing all your defined keystrokes. If you then hit one of those keys, it does what you expect. However, you can instead press F1 and get an all-purpose menu. In this menu, you can press A to run one of your existing keystroke-based rules, M to move a message, or C to copy a message (among other options). After pressing M or C, you can then navigate to any mailbox in Mail, even if you never defined a rule for it. For example, I might press F1 (to display the menu), then M to say I want to move a
message, then spacebar to say I want to search for a mailbox, and finally a few characters of the mailbox’s name. When I find a match (using the arrow keys if necessary), I just press Return. 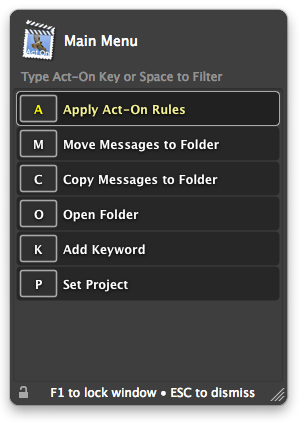 That may sound like a lot of key presses, but they all happen in about 2 seconds, and once you’ve done them a few times to get the hang of them, the process becomes automatic. It’s very cool: with about half a dozen keystrokes, I can move or copy a message to any of dozens or hundreds of mailboxes without knowing where it is, without any advance preparation, and – crucially for me – without taking my hands off the keyboard. And, once I’ve moved a message into a mailbox, Mail Act-On remembers that as a recent destination and in the future, lets me get to it with fewer keystrokes (in a manner somewhat reminiscent of LaunchBar).

Besides the F1 and F2 shortcuts, there’s also F3, which displays a similar menu – this one just for moving messages (thus saving you one keystroke from the F1 method). You can also lock any of these menus open on screen; this enables you to perform a series of Mail Act-On actions in one swoop, rather than continually dismissing and redisplaying the menus.

Other Features — The new version of Mail Act-On can also undo keystroke rules. I’ve wished for this capability many times, after accidentally hitting the wrong key (but not knowing which one I hit), sending messages into an unknown folder somewhere.

If you also have Indev’s popular MailTags plug-in, which adds searchable keywords, due dates, and other metadata to Mail messages, Mail Act-On inherits some additional capabilities. You can have a rule assign keywords, for example (and that includes outbox rules); you can also press K after displaying the F1 menu to add keywords manually, or press P to assign the message to a project (essentially a category). Indev says MailTags integration comes by way of a new extensible architecture that could enable other developers to add their own features, though I have not yet seen any further details on how this works.

Last but not least, Mail Act-On 2 has added a new feature that many long-time users are sure to be less than excited about: a price! Previously the program was freeware, but now it’s shareware (a 21-day free trial is available). The introductory price is $19.95 (expected to increase to $24.95 at some point in the future). Given how much more productive Mail Act-On has made me – and the fact that I’ve had free use of it for several years – I think that price is more than fair.

Productivity Tech News
Cookies & Privacy: We wish we were talking about chocolate-chip cookies here, but our Web site—like nearly all others—relies on a few minor digital cookies. Various laws around the world require us to tell you that fact, so consider yourself informed, if not nourished. By continuing to use this site, you agree to our use of these cookies. Cookie and Privacy Notice