Sometimes you have to attempt feats you don’t know you’re capable of achieving.

I turned 40 in November 2007, and one of my goals for the year was to race every standard timed distance during the year, including a triathlon and a marathon, neither of which I’d ever done. I’ve run competitively since my sophomore year of high school, so it’s not like I was going from couch potato to marathoner, but I’ve always focused on the short to middle distances, everything between 1,500 meters and 10 kilometers, and I would seldom run more than 25 miles per week. The prospect of racing a marathon – more than my weekly mileage in a single shot – wasn’t unimaginable, but it was daunting, to say the least.

I’m almost done with the year, and I’ll be capping it off by running the New York City Marathon on Sunday, November 2nd. Honestly, I’m nervous as all hell. I’ve trained well and managed to avoid serious injury, but it has been harder and more time-consuming than I anticipated, both for me and for Tonya and Tristan, who had to put up with how my long runs and subsequent fatigue tweaked our family schedule.

Long runs? Before this year, I had run 20 miles once in 1984, and two 13-mile races around 1990. More recently, I qualified for the New York City Marathon with a 1:20:45 at the local Skunk Cabbage Half Marathon in April 2008, and since then I’ve successively raised the bar on how far I could run, with a 16-mile trail race, an 18.5-mile trail race, an 11.5-mile trail race combined with a 12-mile road run back to my car, and a full 26.2-mile training run on the roads in 3:30:24. Each of those runs caused me significant anxiety beforehand, and it was a huge relief each time I finished, knowing that I could handle each successive distance. (Tonya has been matching my efforts on her old bike, starting from scratch in late May 2008 when we
bought a tandem to eliminate car miles driving Tristan to school, and working her way up to riding the full marathon distance just yesterday for her longest bike ride since 1989.)

So, if you’d like to follow me during the New York City Marathon this coming Sunday, there are a number of ways to do it. You can sign up for email alerts that track my progress, or you can watch the race on TV or via the Internet (I suspect the chances of my appearing in the video are relatively low, but it might be fun to watch anyway). There’s also an interactive Athlete Tracker that will work during the race, but I can’t tell how that will operate ahead of time. And if you live in New York City and would like to watch the race and help cheer me on, I
gather it’s easy to find a spot on the course to do that.

To track my progress either live or over the Internet, note that I’ll be starting in the first wave, at 9:40 AM Eastern (remember that the clocks fall back 1 hour on Sunday for Daylight Saving Time), and I hope to be running between 6:30 and 7:00 minutes per mile, so you can calculate when I’m likely to hit specific points. Although I imagine it will be difficult to pick any given runner out of the crowd, I’ll be wearing my traditional race uniform of red shorts and a blue jersey with the High Noon Athletic Club sun logo on the front and back. 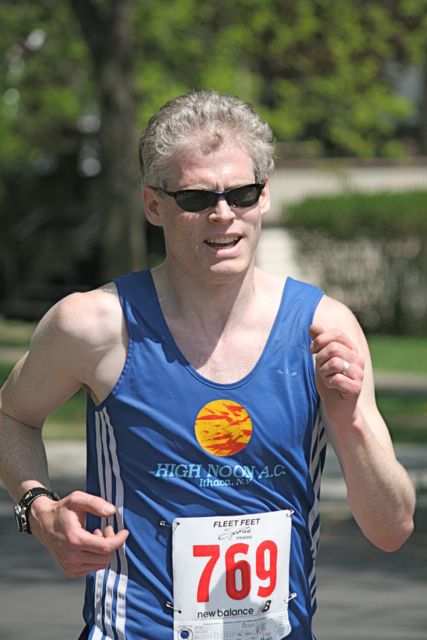 My base goal is to finish, of course, with a more serious goal being to finish in under 3 hours. And if I can get down into the low 2:50s, that’s just icing on the cake.

I’ll report on the race next week, but thanks in advance for any support you’d like to provide, and I hope my efforts can serve as an example of how it’s never too late to try to accomplish something that you had no idea was possible before.

Inside TidBITS
Cookies & Privacy: We wish we were talking about chocolate-chip cookies here, but our Web site—like nearly all others—relies on a few minor digital cookies. Various laws around the world require us to tell you that fact, so consider yourself informed, if not nourished. By continuing to use this site, you agree to our use of these cookies. Cookie and Privacy Notice