Apple has released the iPhone 2.2 Software Update for all models of the iPhone and iPod touch, beefing up a number of key features and refining the interface even further. The software is about 248 MB and is available only via iTunes.

New Features — Chief among the new features of the iPhone 2.2 software are enhancements to the Maps app, including the extremely helpful addition of public transit and walking directions, pictures from Google Street View, a Share Location button that creates an email message containing a Google Maps URL to the location, and the capability to display the address of dropped pins. (These features were not added to the iPod touch Maps application.)

No such luck on the iPhone. To use Street View, you must drop a pin (or perform a search and tap on a pin), and then examine whether a tiny Street View icon – an orange person – is tinted fainter or at full intensity on the descriptive bubble that appears. If at full intensity, you tap the tiny icon, and the Maps application rotates into landscape view to display a navigable image. 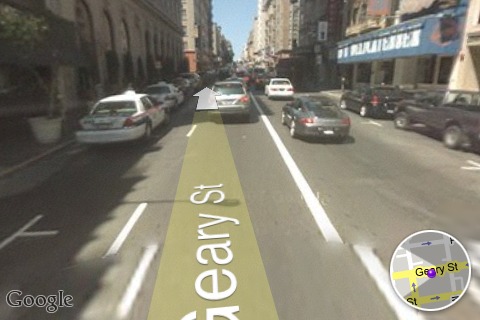 A small circle shows the current cone of sight and street location. You can drag, pinch, and expand, while tapping an arrow moves the view to the next street slice. There’s no warning when data runs out; an empty “holodeck” image appears instead.

The iTunes app also gains the capability to download podcasts over either Wi-Fi or the cellular network. Previously, podcasts could be downloaded only to the iPhone or iPod touch’s host computer and then synced via USB. However, for reasons I don’t yet understand, the iPod touch can’t play the TidBITS podcast within the iTunes app, although downloading it works fine.

Interface Refinements — Although I’m guessing there will be more interface tweaks found by alert users in the days to come, Apple calls out a few in particular:

Bug Fixes — The main advantage of a “soft” phone like the iPhone (where much of the functionality is in software, rather than burned into the phone’s chips) is that it’s possible not just to add features, but to fix problems that would bedevil other phones forever. Apple’s only copping to “Decrease in call setup failures and dropped calls,” the same wording used for improvements in previous releases, but if true, it’s certainly welcome. Apple also says that the sound quality of Visual Voicemail messages has been improved.

Mail receives two important bug fixes, one that resolves problems with scheduled fetching of incoming email, and another that improves the formatting of wide HTML-formatted messages. Too-wide email can play havoc with the iPhone’s narrow screen, as we’ve discovered with the hard-wrapped text edition of TidBITS, where the lines break tremendously awkwardly. If you want to read TidBITS in email on your iPhone or iPod touch, we strongly recommend that you subscribe to our full-text HTML edition, which displays very nicely.

Other bug fixes include improved performance and stability of Safari and fixes for problems connecting to certain secure WPA Wi-Fi networks.

Not surprisingly in this day and age, there are also quite a few fixes related to security. Along with the usual problems that could result in application crashes or arbitrary code execution (usually from visiting a malicious Web site or viewing a maliciously crafted image), there were a few more interesting items fixed.

Overall, it appears that the iPhone 2.2 Software will provide extremely welcome improvements and fixes; the question as always will be if there are other problems introduced by the update, and for that we’ll just have to wait for user reports.

What’s Still Missing — Much as the new features and bug fixes in the iPhone 2.2 Software Update are welcome, the wishlist of features for future updates remains largely unchanged.

iPhone, iPad, & iOS Problem Solving
Cookies & Privacy: We wish we were talking about chocolate-chip cookies here, but our Web site—like nearly all others—relies on a few minor digital cookies. Various laws around the world require us to tell you that fact, so consider yourself informed, if not nourished. By continuing to use this site, you agree to our use of these cookies. Cookie and Privacy Notice