As any self-respecting Apple user/Simpsons fanatic should know by now, a recent installment of The Simpsons indulged in a healthy serving of Apple satire. If you don’t follow The Simpsons religiously, you’ll want to check out the show’s 427th episode, “Mypods and Boomsticks,” which begins and ends with a slew of Apple jokes, focusing on Lisa Simpson’s newfound love for everything “Mapple.” 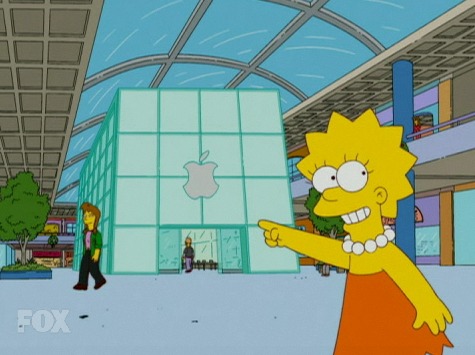 When the Springfield Mall unveils a new Mapple Store, the Simpsons find themselves perusing shelves full of Mypods, Myphones, and mysterious Mycubes that are “fueled by dreams and powered by imagination.” We watch Lisa attempt to purchase Myphonies (fake earbuds for those who can’t afford a Mypod), the Comic Book Guy harass the Brainiac Bar about mayonnaise in his optical drive, and a keynote speech from Mapple CEO Steve Mobs that’s delivered via webcam from the underwater Mapple Headquarters but overdubbed by Bart with some biting commentary. There’s also a reference to the classic 1984 Apple commercial introducing the first Macintosh computer, an Itchy and Scratchy episode
featuring Mypods, and an underwater meeting between Lisa and Mobs that echoes a recent act of Apple philanthropy (though with far less heart-warming results).

I won’t reveal any more of the Apple references so you can enjoy them for yourself. Currently you can find the full official episode on Hulu.com. Unfortunately, Hulu is available only for U.S. residents; those of you in other countries are probably best off watching the clips linked to by Engadget or searching on YouTube manually.