Although Apple’s Time Machine has done a good job of encouraging many more Mac users to back up than ever before, it doesn’t provide a complete backup strategy. Your Time Machine backups won’t do a whit of good if your office burns down, if a thief makes off with your Mac and your peripherals, or if (horrors!) Time Machine itself simply doesn’t back up data when it should. (I’ve seen that happen on multiple occasions.)

That’s why we rely secondarily on Code42 Software’s CrashPlan+ for offsite backups of user-created data. CrashPlan stands out among the many Internet backup programs available these days because it lets you back up not just to centralized servers for a monthly fee, but also to a friend or colleague also running CrashPlan, for no additional cost (see “CrashPlan: Backups Revisited”, 2007-02-26, for Joe Kissell’s initial review). For example, Tonya and I back up our Macs to a hard drive connected to our friend Oliver’s iMac, and he and my parents back up their iMacs to hard drives connected to our Power Mac G5 server.

But CrashPlan’s strength is also its weakness, because Internet connections can be hundreds of times slower than an external hard disk. To give you an idea, I started backing up 96 GB of data from my new MacBook to our offsite CrashPlan drive on 19-Nov-08. After about 17 days, it still had 48 GB left to copy. There’s no way to calculate an average throughput with CrashPlan, partly because neither my MacBook nor Oliver’s iMac is on at all times, and partly because CrashPlan prioritizes small new files over large old files when figuring out what to send during any given session.

So the long-promised addition of local backup capability is a big deal for CrashPlan, and it makes CrashPlan significantly more attractive. You can of course use CrashPlan to back up to a hard disk connected to your Mac, for a local backup that doesn’t consume nearly the processing and network resources of Time Machine but works much faster than an offsite backup. When I set CrashPlan to back up my 96 GB of data to an external hard drive, it completed in under a day. 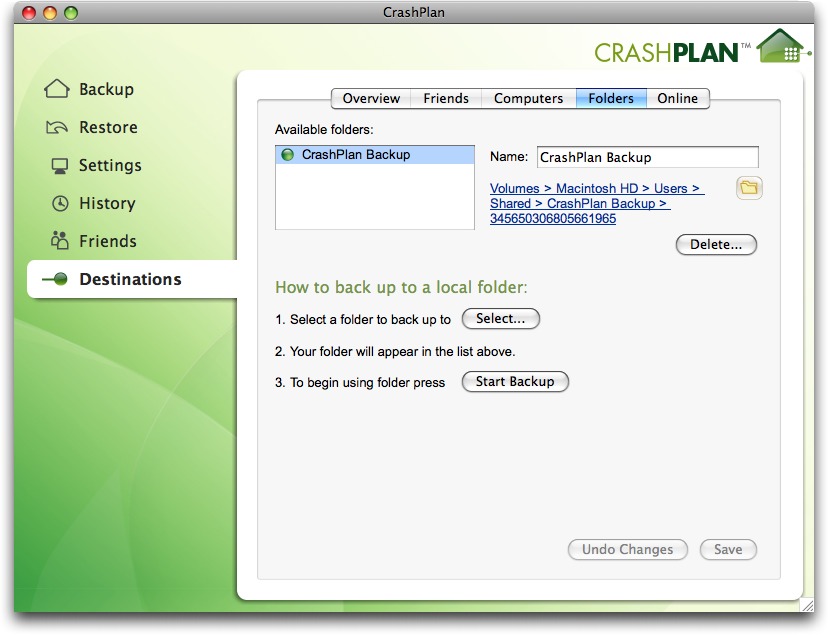 But what’s more interesting about these new capabilities is that they enable you to make a local backup to a hard drive, take that drive offsite, attach to it from another Mac, and continue backing up to it over the Internet without having to enter any IP addresses, set up friends, or open ports (in most situations). There was a way to move a hard drive from machine to machine before, but it entailed a complicated multi-step process. Initial backups should now be much faster and easier.

Perhaps even more important, imagine a situation where you desperately need not just a few files from your offsite backup, but absolutely everything. If I had to restore 96 GB over the Internet from Oliver’s iMac, the entire transfer would be bottlenecked by his upstream throughout of 750 Kbps and would likely take days. With the new version of CrashPlan, I could retrieve my hard drive from Oliver, attach it to the Mac that needed to be restored, and bring back data at hard drive speeds instead of Internet speeds.

Note that I haven’t yet had an opportunity to try this process of seeding a new backup or bringing a remote backup home. And it’s worth keeping in mind that even with this new capability, CrashPlan cannot yet back up an entire Mac and restore it to a bootable state later. (Matthew Dornquast of Code42 tells me that if you backed up an entire disk from /Volumes and later restored it, you could “bless” the disk and get it to boot. I haven’t tried this yet, and I’d be hesitant to recommend relying on it until it’s an official feature in CrashPlan.) As such, I use CrashPlan to back up only user-created data right now, though you could certainly back up /Library and /Applications as well for faster recovery in case of major disaster.

The release notes for this new version of CrashPlan do point out that although you can select any folder for your destination, it should be on a relatively fast device like an internal or external hard drive, file server, AirPort disk, or Drobo. Trying to back up to an iDisk or MacFuse mount of your Gmail account won’t work (nor will, as the wags at Code42 cheekily noted, an NFS mount over a 1200 baud modem).

The latest release of CrashPlan includes a number of other less-important features, including an option to turn off compression (which speeds up direct-to-disk local backups), performance improvements in CrashPlan’s synchronization phase, additional corruption checks to detect bad destinations, a more finely grained progress bar, and improvements to the restore interface. You can also invite friends to be backup buddies via a number of Webmail and social networks. Bug fixes include eliminating replicated email alerts, proper hiding of hidden files deep in the file hierarchy, and more accurate statistics.

CrashPlan downloads and installs free updates silently in the background, so anyone currently running CrashPlan will already have the 10-Dec-08 update. For those who haven’t yet gotten started with CrashPlan, you can download a 30-day trial version (9.8 MB), and new copies of CrashPlan+ cost $59.99. (CrashPlan+ has real-time backups and unlimited versioning, which I recommend, and I’ve been given to understand that you don’t want to buy the more-basic CrashPlan for reasons that will become clear next month.) Both you and your friend will need a copy, though you can back up to an unregistered copy.

Productivity Security
Cookies & Privacy: We wish we were talking about chocolate-chip cookies here, but our Web site—like nearly all others—relies on a few minor digital cookies. Various laws around the world require us to tell you that fact, so consider yourself informed, if not nourished. By continuing to use this site, you agree to our use of these cookies. Cookie and Privacy Notice