If you’re disappointed in your iPhone 3G’s battery life, there’s a new solution in town – the Incase Power Slider 3G. Let me get this out of the way right up front: the Incase Power Slider for iPhone 3G provides the battery life the iPhone 3G ought to have had from the start. Sure, it bulks up both the size and weight of the iPhone, but all your battery frustrations disappear.

I’m no more able to resist the Reality Distortion Field than anyone else. In fact, I’ve owned a lot of Apple technology, including a Newton, and yes, even an eMate. I like my MacBook Pro, I enjoy my iPod, but I love my iPhone. There has been only one time since my purchase that I was more than six feet away from it. The first-generation iPhone did a decent job with its battery, and when the iPhone 3G came out, I upgraded.

Overall, the iPhone 3G is even better than the first-generation iPhone, and I especially appreciate the 3G speed boost over EDGE. In fact, I like almost everything about the iPhone 3G more than the original iPhone.

Everything, that is, except for the battery. I think everybody who owns an iPhone 3G will agree – the battery life is fair at best. Face it, you know you’re constantly checking your battery life throughout the day, worried that you’ll be stuck without enough power in the middle of an important call or when you most need to check directions via the Maps app.

If you want your phone to last all day (say 12 or more hours of sporadic use), you have to learn how to maximize your battery life. I’ve gotten pretty good at the necessary dance. At home, I use Wi-Fi and keep 3G off. When I drive to work, I turn off Wi-Fi and turn on 3G. I don’t bother with Bluetooth, since it drains battery life even more. Despite these precautions, if I am going out at night, I have to remember to charge the iPhone midday.

I’ve been watching the market for external battery packs for the iPhone 3G. There’s the Backup Battery for iPhone from Richard Solo, the 3G Juice, the mophie Juice Pack 3G, FastMac’s TruePower iV, and now the Incase Power Slider for iPhone 3G. The first two are standalone batteries; the other three double as cases.

The Incase Power Slider came out on 28-Nov-08. It was available only from Incase’s Web site, or from an Apple Store, where I ended up purchasing it for $99.95.

Basics — The Power Slider box’s design is similar to that of the iPhone. Inside is an attractive pouch, a manual, and a USB cable that features a standard wide (A-type) USB connector on one end, and the smaller (Mini-B) USB connector on the other. This is the same sort of cable that comes with most digital cameras, and is what you’ll use for syncing and charging instead of the iPhone’s normal dock connector cable.

The case itself comes in two pieces, a top half that fits around the phone, and a bottom sliding half that contains the battery compartment. At the top of the case there’s a cutout for the sleep and volume switches and the headset jack. On the back there’s a cutout for the camera, and holes at the bottom provide access for the iPhone’s built-in microphone and the case’s USB jack.

The Power Slider fits pretty well around the iPhone, but my fingers keep getting drawn to the seam between the two halves. I’m not sure if the fit is a little off, or I’m just being picky. A fellow iPhone geek agreed that it’s likely just a manufacturing glitch.

The obvious drawback to the Power Slider is that it changes the size, weight, and form of my iPhone. By itself, it’s 5.1 inches x 2.6 inches by 0.86 inches (129 mm x 66 mm x 22 mm). It doubles the thickness of the phone, making it about the thickness of a Treo. It also adds about an inch (25 mm) to the length of the phone and 2.5 ounces (70 g) to the weight. I’m much more aware of it in my pocket, which isn’t entirely a bad thing, since before this I’ve had a couple of panic attacks because the iPhone is so light, I forgot it was there. 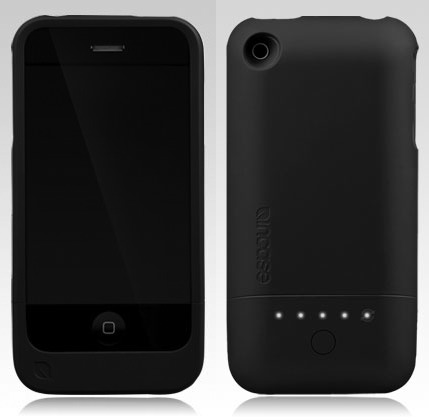 On the back of the case is a small button. Press it, and up to five lights come on to let you know the battery status. If you hold the button down for 3 seconds, it preps the phone for syncing when you plug in the USB cable. This failed sporadically, such that iTunes didn’t realize that my iPhone was plugged in. The instructions state that you may need to restart iTunes in such situations. I run the Growl notification manager, so I was able to see when my Macintosh detected that my iPhone was plugged in. Aside from these occasional setup problems, syncing via the Power Slider’s USB cable worked fine.

Like any battery-driven product, the Power Slider needs to charge fully before its first use; a full charge takes about three hours.

I started using the Power Slider at 8 PM. After 24 hours of light to moderate iPhone use – about 60 minutes of phone calls, a dozen text messages, about an hour of app use, brightness set to medium, email on push – the Power Slider’s external battery finally ran out. But I wasn’t dead in the water, since my iPhone was still running happily on its internal battery.

Am I happy with the Power Slider case? Yes, I’m pretty pleased. I’ve now had the Power Slider for two weeks, and it’s been great. I’m still doing the dance between 3G and Wi-Fi through force of habit, but only because I’m still gun-shy about ending up with a powerless iPhone. However, I have rediscovered my Jawbone Bluetooth headset, which I’d previously abandoned due to poor battery life. I’ve also had some crazy travel days, where I needed to use the iPhone for 18 or more hours, and the extra battery life kept me sane. I’ve even done what I never would have felt comfortable doing before due to battery life concerns – I’ve ridden in cabs with the GPS running to make sure I was heading to the right place.

Should you buy a Power Slider for your iPhone 3G? If you’re struggling to make it through the day even with smart power management, then absolutely, positively yes. That’s especially true if you travel a lot and rely heavily on your iPhone to work at all times. However, the changes to the iPhone’s form factor are impossible to ignore, so if you’re uncomfortable with a thicker, heavier phone, I’d say to look instead at the 3G Juice or Richard Solo Backup Battery, both of which can be carried separately from the iPhone and attached only if you need the extra power.

[Jeff I. Greenberg is the Principal Instructor of Future Media Concepts, where he teaches film and video solutions from Adobe, Apple and Avid. You can find out more about him at his Web site. And if you really like, you can follow him on Twitter.]