John Chaffee of BusyMac, makers of the BusySync utility for synchronizing iCal events among multiple Macs, has solved the problem of importing events from Now Up-to-Date to iCal, something that took me quite some effort when I made the switch to iCal recently.

As I wrote in “Converting from Now Up-to-Date to iCal and BusySync” (2008-12-12), the conversion process previously required exporting to text, editing the text file in BBEdit, importing into Palm Desktop, exporting again in vCal format, and then importing into iCal. My approach worked, but was time-consuming and finicky.

When I tested John’s first beta of NUD to iCal, the import process took far too long due to repeating events in Now Up-to-Date. Since they can’t be transferred to repeating events in iCal, that first beta tried to transfer each one as a separate event, and with 20 to 50 repetitions of each birthday and holiday in my calendar, the number of events to transfer was insanely high. John worked around that problem in the second beta by transferring only the first instance of each repeating event, radically improving performance. 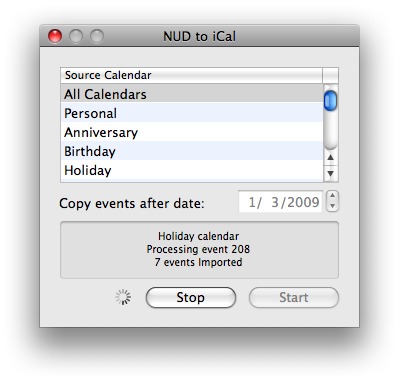 I suggested to John that he could tag every repeating event with [REPEATING] in the title, after which it would be easy to find those events in iCal and edit them to repeat properly again. He implemented that in the final version, and it works swimmingly. I find that it’s good to go through repeating events and make sure they’re worth moving over anyway, so the extra effort of making them repeat isn’t problematic.

NUD to iCal is free, and it’s a tiny 80K download. If you’re considering a move from Now Up-to-Date to iCal, it’s essential.